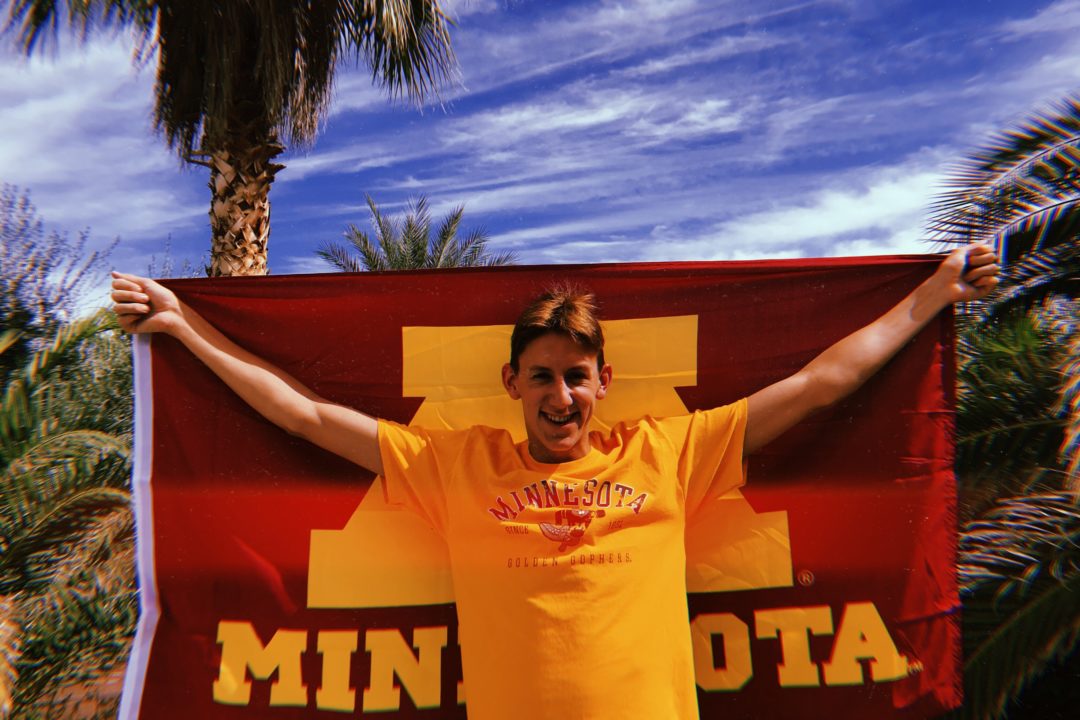 Sawyer Grimes, an Olympic Trials qualifier in the distance free events from Sandpipers of Nevada, has verbally committed to Minnesota. Current photo via Ronald Aitken

Las Vegas-native Sawyer Grimes has announced his intention to swim for the University of Minnesota next fall. The class of 2024 is coming together nicely so far, with verbal commitments from Antonio Octaviano, Brock Aune, Cameron Linder, Casey Stowe, Chris Nagy, Kaiser Neverman, Leo Goldblatt, Nathan Kim, and William Christenson in addition to Grimes.

Grimes swims at Sandpipers of Nevada under coach Ron Aitken, who had this to say about his protégé:

“Sawyer is an extremely hard worker. His hard work has brought him some really good results. He wasn’t at the top of the team or training group and had to work his way thought the program. Sometimes he would be held back longer than other swimmers on the team as he was late bloomer, but eventually didn’t let that stop him as he has been soaring to the top lately. Early signing is stressful but Sawyer took it in stride as he was patient with the process and made the best of it. He found himself feeling behind and pressured to make a choice because of the early signing, but he found a good fit and he is excited about Minnesota.”

It took 4:24.77 to get a second swim in the 500 free 15:26.17 to score in the 1650 at 2019 B1G Men’s Championships so Grimes should already have his foot in the door when he gets to Minneapolis. He’ll find a nice training partner in San Diego’s Chris Nagy who announced his commitment yesterday.

“I am beyond thrilled to announce my verbal commitment to continue swim and study at the University of Minnesota!! I knew from the moment I met the team that I was born to be a GOLDEN GOPHER!!”

I DUB THEE SAWYER OF SAND!

The Kostoff Effect is only just beginning… Congrats to Sawyer!