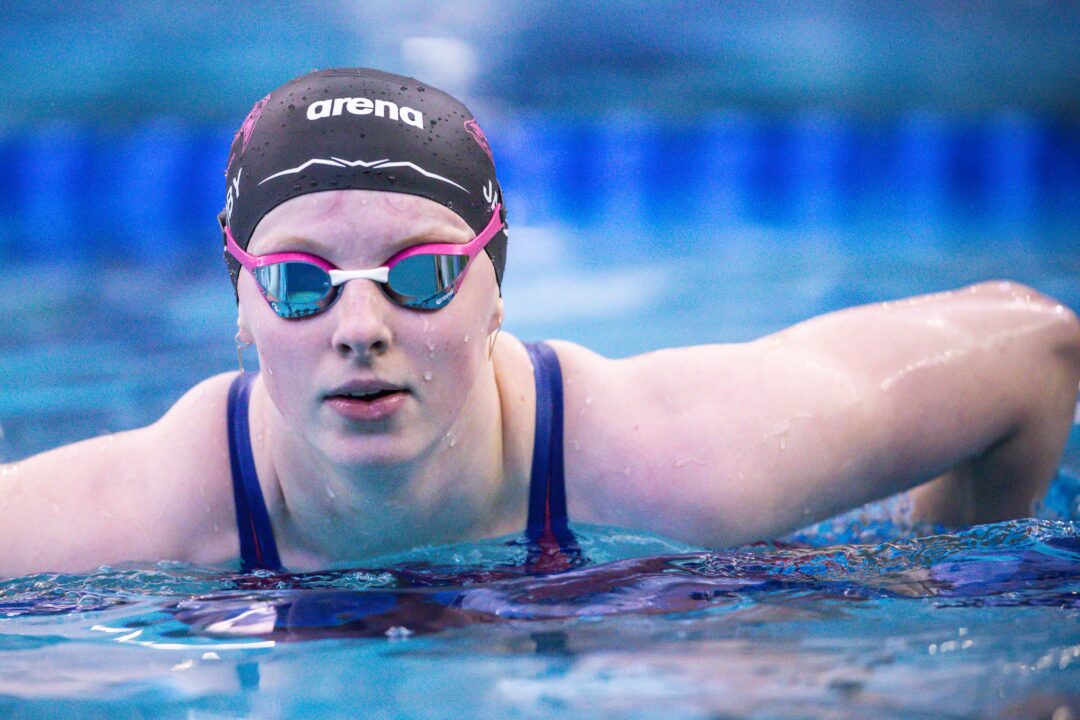 The Texas Longhorns’ NCAA competition has wrapped up for the fall semester, and holiday training looms. There’s still competition happening in Austin though, as some of the country’s top junior swimmers will take over the pool deck for the 2022 Winter Junior Championships – West. The meet is one of two Winter Junior Championships, with the other being held in Greensboro, NC after the conclusion of the U.S. Open.

Not all Texas’ roster will be in training mode just yet, as freshman and Olympic gold medalist Lydia Jacoby is set to race the 100 and 200 breast. At the Minnesota Invite, Jacoby broke the girls’ 100 breast 17-18 NAG, throwing down a 57.54. It was a massive personal best for her, and proved that she’s capable of being just as dangerous in yards as she is in meters.

Jacoby confirmed to SwimSwam after her Minnesota race that she will indeed compete at Winter Juniors. In addition to her top seed in the 100 breast, she’s also seeded #6 in the 200 breast in 2:11.31. She swims that race on the final day of the Minnesota Invite, so we’ll get a preview of where she’s at in that event before seeing her in action against other top juniors.

The lethal Sandpiper trio of Katie Grimes, Bella Sims, and Claire Weinstein are also set to race in Austin. Grimes and Sims kicked off their fall season with sensational swims at the Indianapolis stop of the FINA World Cup. Both set SCM world junior records there: Grimes set the 1500 free record (15:42.05), while Sims broke the 200 free (152.59) and 100 back (55.75) records just 12 minutes apart.

At Winter Juniors, we’ll see Sims race both those events in yards. On the SwimSwam podcast, she acknowledged that backstroke has become her best stroke outside of freestyle, her true love is butterfly. Of her six entries, the 200 fly is her only pure fly event, but she’ll get to swim it in her 200 IM as well.

Sims, Grimes, and Weinstein have all taken on massive schedules at the meet. Sims is entered in six events, Grimes in seven, and Weinstein in eight. Given that all three are entered in a brutal back-to-back 500 free/200 IM double, expect them each to scratch at least a couple events. That said, the Sandpipers are known for the incredible yardage they train, so they’re certainly capable of pulling off these loaded schedules if they want.

On the boys’ side, we’ve got some thrilling freestyle races to look forward to. On the first day of competition, Stanford commit Rex Maurer goes head-to-head with Cal commit Keaton Jones. They’re separated by just .14 seconds, with Maurer holding the advantage at 4:15.40.

In the 200 free, they’re seeded #2 and #6 respectively, in a crowded field that includes, among others, Nate Germonprez, Cooper Lucas, and Maximus Williamson. We got a preview of how exciting this race could be at the LAC Fall Classic, where Williamson edged out Lucas by just .22 seconds.

At Junior Pan Pacs, Williamson joined Michael Phelps as the only 15-year-old Americans to go under 4:20 in the 400-meter IM. Unsurprisingly, he’s the top seed in that event, entered with a 3:42.22. Like Weinstein, he’s also entered in eight events.

Top Seeds In Each Individual Event

The Sandpipers entry time for the girl’s 4×200 relay is almost 18 seconds faster than the next fastest team. Ridiculous. Maybe they’ll actually get to set the NAG this year since Weinstein is 15 now.

Yeah I think that meet record is going down.

“The lethal sandpiper trio” i like that a lot

I am trying to imagine being a high-level swimmer that is listed below the “lethal trio”. Always the bridesmaid comes to mind.