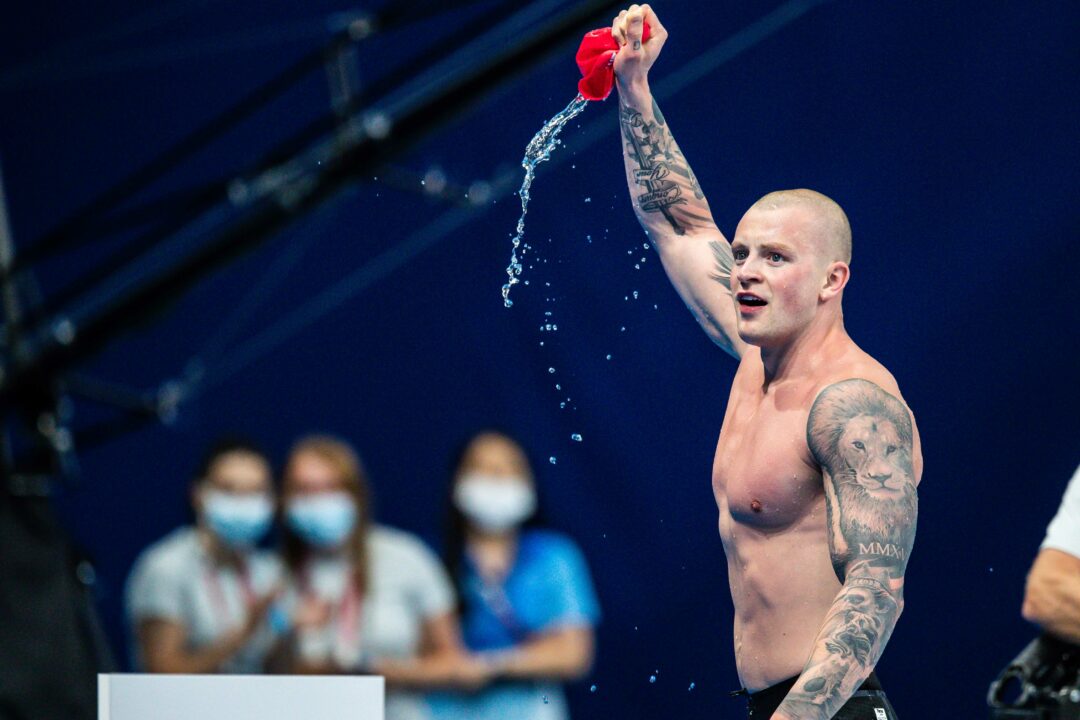 With another Olympic gold under his belt from Tokyo, 27-year-old Adam Peaty is now looking ahead to what they term 'Project Immortal.' Archive photo via Jack Spitser/Spitser Photography

British Olympic champion and World Record holder Adam Peaty achieved his prior career goal of ‘Project 56’ when he posted the other-worldly time of 56.88 in the men’s 100m breaststroke at the 2019 FINA World Championships.

With another Olympic gold under his belt from Tokyo, 27-year-old Peaty and longtime coach Mel Marshall are now looking ahead to what they term ‘Project Immortal.’

Project Immortal signifies the goal of setting a record that will stand the test of all time.

Peaty says, “Doing a time that can never be beaten… the next three years is how we achieve Project Immortal.

“More than ever we have to kind of attack. I know where I need to be to get to Project Immortal.” (Sky Sports)

Peaty’s gold medal from this summer’s Olympic Games came with a time of 57.37, outside of his aforementioned WR mark, which left the new father slightly disappointed.

“Going into 2021 was tough,” he says, “because my mindset was geared up for last year.

“There was a lot more pressure and a lot more relief when it paid off, but it cost me a lot to get there in terms of my motivation and my commitment.

“I questioned why I was doing it and I never question it – this is what I love. But when you do it without gratification, without winning gold medals, that’s when you start to question ‘why’. That was the toughest thing – beating myself.”

Now with some time off, including competing on the British celebrity dance show ‘Strictly Come Dancing’, the man is already looking ahead to what it will take to achieve Project Immortal.

“Obviously Paris is on the cards and hopefully if I get what I want there, then it’s LA 2028,” he says.

“If I can do what I [want to] do there then I don’t know. I’m already living my boyhood dream so that would be my ‘man’ dream.” (Sky Sports)

Breaststroke is getting hotter and hotter when Emre just swam a 24,9.

Breaststroke is a stretch to describe that

Superb swimmer, but as stated here, it comes across to me as
just too much ‘ego’ and not enough down-to-earth humility.

Nah, he’s cool…
But some people may find offensive the fact that he knows he’s the GOAT and he has no intention of hiding it… Me? I can respect that.

I just don’t like that he literally swims one event and is hyping himself up this hard.

I don’t see the “problem” in swimming “only one event” when you’re literally the best human being that has ever done it.
Of course there are all the Remels and Genevieves… But come on… he’s been body lengths ahead of his competitionfor how many years now?

Dangit, I replied to this but someone at Swimswam doesn’t like my new WiFi network.

Why not?? Can’t wait to watch his next races when he’s preparing with this type of motivation

A better comparison would be calling Dressel the GOAT butterflyer after he swims a sub 49.

uhhhh timing stats say otherwise. you know that ol chestnut we base our entire sport around.

Phelps won 3 Olympic gold medals in the 100 fly and 3 in the 200. Dressel might be the GOAT 100 flyer, but all around it’s technically Milak or arguably Phelps.

Thanks for checking the math on that for me. I was being completely serious in my comparison.

Peaty is also the WR holder and reigning 3 time world champ in the 50m breaststroke.

Ah, I must’ve forgotten all those Olympic medals he’s won in the 50.

(Not that I don’t like 50s – I do! – but as events they basically do not exist when evaluating how “immortal” someone is.)

I hate this fascination in the swim community with humility all the time. If we want to grow as a sport, we need some egos, we need some drama. If Peaty came out and said “I am the greatest swimmer of all time, MP has nightmares when he thinks about me,” or something along those lines, think of how much publicity we’d get. Let’s have some trash talk, makes it more fun

It’s either “Such and such swimmer should be more humble” or if a commenter makes a valid critique “You can’t say anything because you don’t have a gold medal/WR/etc.” It’s so obnoxious.

I saw Cody say the latter on a SS post on Instagram lately and that was super disappointing.

He of all people should understand the nature of the industry of sport. But he, like every famous swimmer throughout history, as dependend on mostly 8-14 year olds and their soft suburban mothers for their marketplace, so maybe I shouldn’t be surprised.

But, this is why leagues like the ISL will never work. The athletes can’t get out of their own way and let sports fans be sports fans. Oh well, they’re the ones losing out on the money, not me *atlas shrugged*.

To say that valid criticism of athletes is unacceptable is a common strawman. The problem is that it often comes with ad hominems.

As they say if you talk the talk, you better walk the walk….and he does…so good on him. Some swimmers are big talkers (Peaty, Hall Jnr)…others are quiet achievers (McKeon, Chalmers), it take all types.

Fans like you are why swimming is no fun

Kinda agree with this

weird to hear that when we now have a 4:03, things changed a lot

Honestly dolphin kicks to 15 might genuinely be good for breaststroke I don’t like it but it eliminates the complexity of a pullout and the ways people are bending the rules. But even then, AP’s 100 would still be ridiculous

Going to take a 55-high to become “immortal”. I am anxious to see what both Adam and Mel believe is the projected time goal.

I wonder if this is just another way of saying he’s going for a 55…because if the world is still a second behind him at 56, no one is touching 55 for decades (unless FINA makes the double dolphin kick legal)

Obviously, he has never heard the saying “Today’s records are tomorrow’s time standards.” But, if the record stands too long, the officials might change the rules to get faster times – one hand/flip turns, allow dolphin kicks in between whip kicks, etc..

Has that ever happened before where rules were changed to get better times?

38
-1
Reply
Swimmerfromjapananduk
Reply to  The Questioner

If anyone can, peaty can. Either that or he goes in the 200

1
0
Reply
Owlmando
Reply to  The Questioner