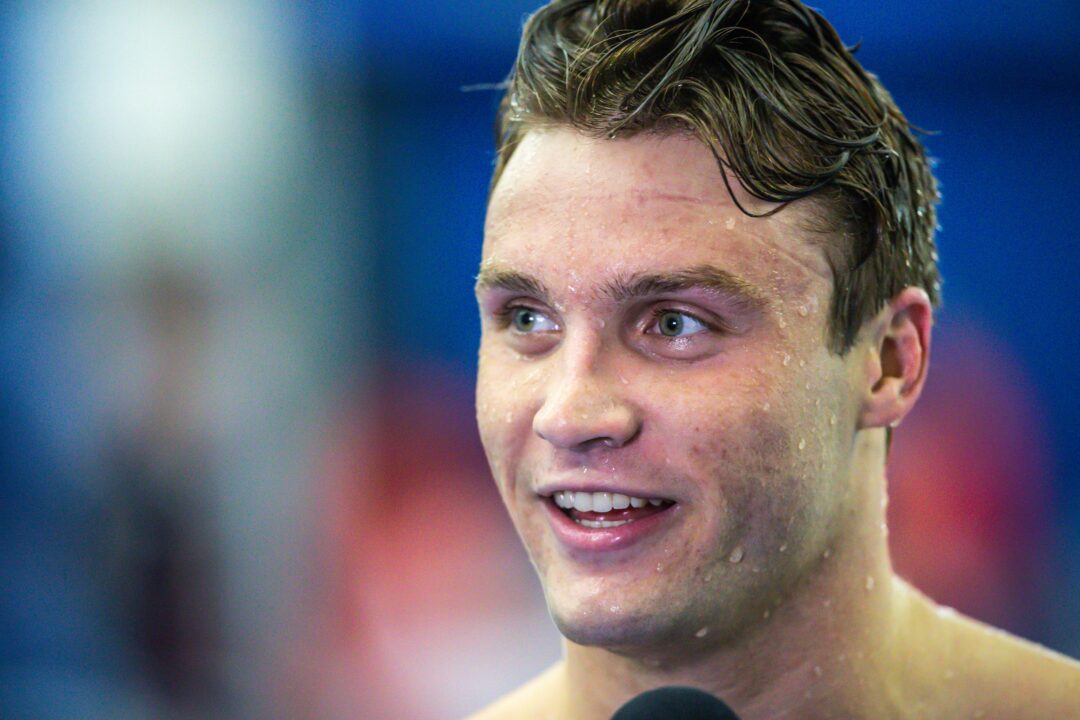 US Olympic swimmer Bobby Finke confirmed this weekend that he won’t return for his 5th year of eligibility at the University of Florida, turning pro and ending his NCAA career.

While college athletes normally only received four seasons of eligibility, the NCAA awarded an extra year for those student-athletes who competed in the COVID-impacted 2020-2021 season.

Finke spoke with SwimSwam’s Coleman Hodges after winning the 800 free national title at the US National Championships last week in Irvine.

Finke came into the meet very sick and was sick in bed for three days coming into the meet. After scratching the 1500 free at the start of the meet, he wound up swimming and feeling better, taking the win in the 800, though he called the time “garbage.”

Finke said that his original plan was to use the meet as a backup in case something went wrong at Worlds, with a Plan B to swim “backup events,” like his Florida post-grad training partner Katie Ledecky did, but he likewise didn’t have any cuts in off events. After being sick, he decided against Time Trials. That left him racing his usual 400 free, 800 free, and 400 IM after the early scratch.

Finke won Olympic gold in the 800 and 1500 free, and then earlier this year at the World Championships, he won the 800 free and was 2nd in the 1500 free behind Gregorio Paltrinieri’s monster front-half swim.

Finke says he’s going to take a break for the next “month-or-so” and go to Universal Studios before getting back into training before confirming that he’s done with NCAAs.

“I think it’s better for my future swimming. I don’t have to take…multiple interruptions with my training with taper and stuff, it’s a little different for a distance swimmer, I think. It would be better to have a consistent training, at least leading up to the big meet Worlds this year.

“To be able to just have a consistent training block up to World Trials is something I’m looking forward to.”

The comments came in spite of Finke showing the ability to handle the NCAA-Trials-(international meet) triple pretty comfortably in the past two seasons.

Florida now graduates both of the superstar Olympians off a team that finished 3rd at the NCAA Championships last year. Olympic bronze medalist Kieran Smith previously indicated that he would forego his 5th year as well.

At SECs, Smith was the team’s leading scorer with 92 points, while Finke missed that meet due to COVID-19 protocols (this week’s Nationals is part of a long run of health issues cropping up before big meets for him).

At NCAAs, Smith scored 44 points, while Finke scored 42, including an NCAA title in his last swim in the 1650 free. That made him a three-time NCAA Champion after winning both the mile and the 400 IM as a junior in 2021.

Would be great to see Finke key off of Paltrinieri’s early pace next time they meet up. So curious how his finishing kick.would be at that faster pace. Makes me wonder in Budapest had he done that.. would he have blown up or gone 14:27?

I can see by some of the comments why swimmers are coached in ” handling media questions” Instead of honesty we get ” I feel honored to just swim with these wonderful competitors, or just proud to have medaled..instead of..” a piano fell on my back because I took it out to fast..or I felt heavy in the water and felt like puking, or my time was horrible, or the real honest one..I got lucky I won because a lot of the top swimmers faster than me aren’t here! Now that would be entertaining:))

Probably a good idea to not spend 7 months focusing on bathtub swimming and also free up scholarships for the next generation. Im honestly shocked at how many athletes are coming back for a 5th year, seems like a long-term risk to the development of the program, and also it’s time to move on with life…. I can’t believe we have 3 more years of this. I really think it should have only been available to those whose senior year got messed up.

Agreed.. he will do a lot better focusing on just LCM now.

I think it is so rude for a guy like finke to win usa nationals and then say the time is garbage. That is just disrespectful to the other guys in his heat

my man he’s the AR holder in the 800, of course he’s gonna say his time is shit

He has the right to judge himself by his own standards

Tiger always talked about winning with his B game.

You don’t become great being happy with subpar performances. He didn’t call other swimmers trash, just his own time

Participation trophies and smiley faces for everyone!!!!

The true status of American distance w/o Finke

He could just say he did the best he could considering he was sick all week.

I missed the announcement that Kieran Smith is not coming back for his 5th year (does anyone remember when that was – Link?).
﻿

Strike while the iron is hot! This year he showed Tokyo was no fluke. Seems like one of the most marketable US distance swimmers ever.

It would be cool to see Bobby set a WR before he retires.

He’s the only top distance swimmer the USA has. He’s brought a lot of attention to the longer events because we all watch to see his tremendous finishing kick.

Do other countries have a whole gaggle of world and Olympic medal level distance swimmers or…..?

Not really but the US is so deep in many other events often with multiple medal opportunities. This has not been the case with US Mens distance events for decades.

Australia has had more top distance swimmers and Italy with Detti and Paltrinieri.

Not quit medal level but Ukraine did put a second swimmer in behind romanchuk in both distance events in Tokyo: Serhiy Frolov.
Italy has Greg and Detti who both have medals at some point and both final.
Germany has wellbrock and if Lukas martens can do well at the big meets that is a second finalist.

It would be cool to see Bobby set a WR before he retires.

I think he’s capable. He dropped a good amount of time in his events this year despite what seemed like a rough training block (post-olympic year, multiple taper meets leading up to Worlds, having COVID, and I think a shoulder injury in the fall).

It would be cool, though he’d probably have to swim quite differently.

Unfortunately we can more or less write off the 800, he’d have to drop 1 secondper hundred and do back to back 3:46, anyone who gets that record will have to be at least low 3:40s in the 400 just to have the speed.

That means the 1500. He’s 5 seconds off the record, to break it he has to do the pace Paltrinieri did at Worlds than come home in his usual time. Very different race strategy to be that aggressive from the gun, be interesting to see how he adapts to it and if he’s prepared to risk the piano and potentially missing the… Read more »

He has Gregorio to pace off for 1400 meters and then he does his Finke thing the last 100. Might work thats kinda what Sun did in his record swim he finished huge.