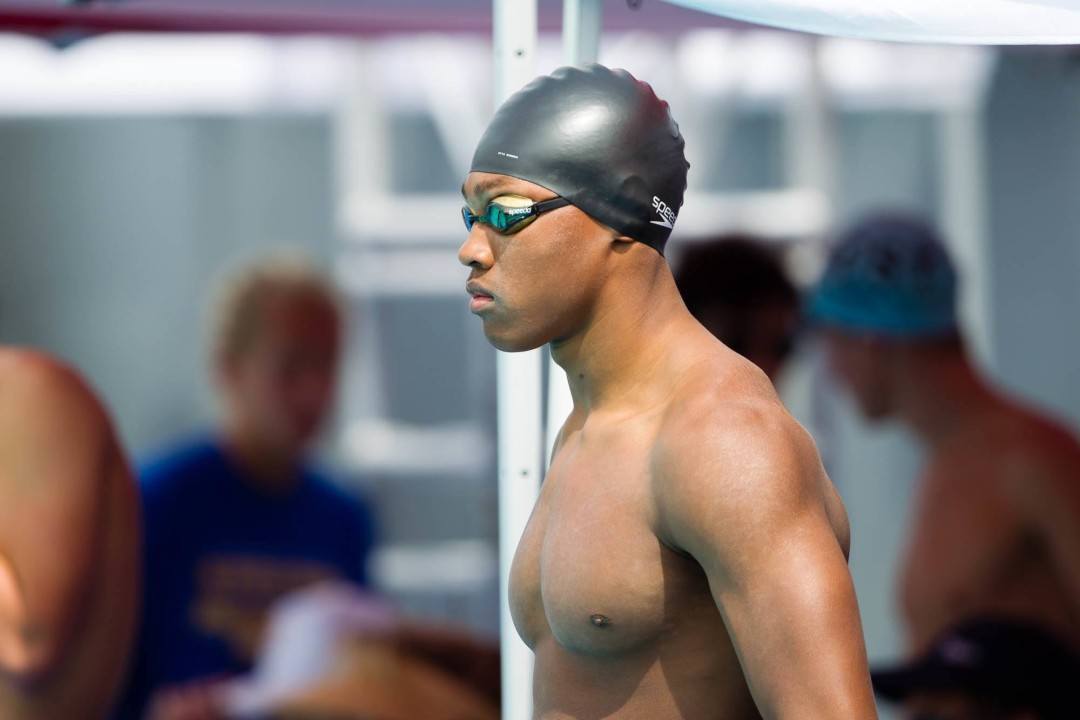 Sophomore freestyler Tabahn Afrik was a triple-winner for the Irish on Friday Current photo via Tim Binning/TheSwimPictures.com

The Notre Dame Fighting Irish men and women started off their competitive season yesterday by dominating a pair of Big Ten teams, cruising to victories over the host Michigan State Spartans (W: 169-54, M: 159-62) and the Iowa Hawkeyes (W: 154-69, M: 151-72).  Both the Hawkeye men (130-87) and women (147-76) topped Michigan State.  Competing in the Spartans’ outdoor long course pool, the Irish touched first in 20 of 24 swimming events, including more than a half-dozen 1-2 finishes.

The Hawkeye women won a pair of events, with junior Tereysa Lehnertz touching first in the 200 fly with a win in 2:19.54, and Jacinda Thomas winning the 1m springboard.

In the men’s meet, four different Notre Dame swimmers notched at least two wins.  Tabahn Afrik led the way as the only men’s triple-winner, and he did it swimming nothing but 100 freestyles.  After anchoring the 400 medley in 52.45, Afrik came back to win the individual 100 by over a full second in 52.73.  The sophomore freestyler then bettered that time leading off the winning 400 freestyle relay (52.60) to close things out.

Michigan State freshman Scott Piper was the lone Spartan champion, touching first in the 200 IM in 2:12.98.  Iowa’s only male win on the afternoon came in 1-meter diving from Brandis Heffner.

Notre Dame will be competing again this week when they host the annual Dennis Stark Relays.  Iowa and Michigan State are keeping things internal; the Hawkeyes have their intersquad meet next weekend, and the Spartans will host their alumni meet in two weeks.

Iowa looking a bit slower than usual. Maybe they have stopped resting for dual meets?