Notre Dame Holds Edge Over FSU After Day One of Dual 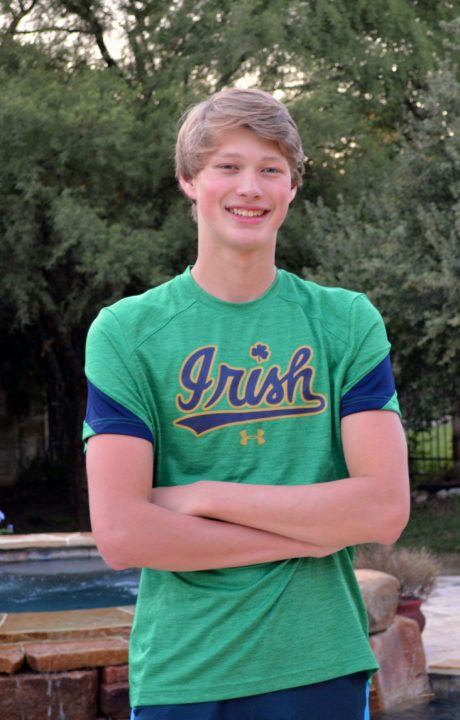 The Florida State men won their fair share of events, though, taking the opening 200 medley relay (1:28.49) along with three individuals. Chad Mylin nearly cracked twenty seconds with a 20.06 in the 50 free, while Matt Ankerholz was 56.05 to take the 100 breast and Kanoa Kaleoaloha swam a 50.56 to knock off Whitacre in the 100 IM by just over a tenth. The Seminoles also edged ND in the 400 free relay, though the Fighting Irish will cling to an eight point lead heading into tomorrow.

TALLAHASSEE, Fla. – After the first of two sessions, the (No.25/20) Florida State swimming and diving teams narrowly trail (No.22/22) Notre Dame after the 10 events competed on Friday. The meet will resume on Saturday at 2 p.m. at the Morcom Aquatics Center.

“I thought we had a solid first day,” FSU head coach Neal Studd said. “There are just some things we need to tune up for tomorrow. I think Saturday’s events swing more in our favor, so we’ll just have put ourselves in a better spot in order to take advantage.”

The men started off the session edging out the Irish in the 200 medley relay as senior Joe Plechy pulled the Noles to victory in the anchor leg. Seniors Chad Mylin and Matt Ankerholz along with junior Kanoa Kaleoaloha clocked 1:28.49.

Ankerholz held on at the finish to win the 100 breast, touching with a time of 56.30 and freshmen Julio Horrego (56.47) and Ryan Telford (56.82) added crucial third and fourth place points.

After surrendering a sweep in the 100 fly, the Noles gained some ground in the 50 free as Mylin touched first with a time of 20.06 ahead of Plechy in third at 20.48 and junior Will Pisani in fourth with a mark of 20.49.

Kaleoaloha won the 100 IM with a fight to the finish with a time of 50.56 while sophomore Nate Samson placed third at 50.91.

The Seminoles and Fighting Irish were neck-and-neck in the final 400 free relay, as Plechy, junior Emir Muratovic and Ribeiro de Souza handed Pisani a slight edge. As the anchor, Pisani held on, touching with a time of 2:59.70.

The men also competed in 3-meter diving, led by freshman Josh Davidson who placed second with a total of 348.93 ahead of senior Tyler Roberge in third at 308.48.

In the women’s meet, the Seminoles were strong on 1-meter with a one-two finish as senior Blaire Mulka led the way with the win at 276.08 and sophomore Ayla Bonniwell followed in second at 276.38, edging out Notre Dame’s top diver by three one-hundredths of a point.

Notre Dame answered with a one-two finish in the 100 free and a sweep in the 200 free.

Cohen led the Noles in the 100 back, touching second with a time of 55.37, just ahead of her classmate Ana Zortea who touched third at 55.58.

Pierce continued her dominance in the 100 breast, using a strong back half to win the race, clocking a 1:01.34.

The Irish followed with a sweep of the 200 fly, but the Seminoles answered with a strong 50 free as Smith won with a time of 23.27 ahead of freshman Emma Terebo in third (23.56).

Notre Dame ended the meet with a one-two finish in both the 100 IM and 400 free relay.

TALLAHASSEE, Fla. – A fast Friday start carried the University of Notre Dame men’s and women’s swimming and diving teams out of the blocks to kick off an Atlantic Coast Conference (ACC) dual meet at Florida State. Wins in 11 out of 20 total events on the opening evening of competition lifted the No. 22 Irish men to a 97-89 lead over No. 20 Florida State, while the No. 22 Notre Dame women held a 112-74 edge over the No. 25 Seminoles after one session at the Morcom Aquatics Center.

Freshman Zach Yeadon finished day one as a double-winner for Notre Dame, notching an NCAA B-cut with a winning swim of 1:37.83 in the 200 freestyle to go along with a triumphant effort of 9:05.07 in the 1000 freestyle. Sophomore Abbie Dolan added wins in the 200 freestyle (1:48.20) and as a member of the women’s 400 freestyle relay (3:21.00), while junior Alice Treuth fashioned an NCAA B-cut time of 54.30 in a victorious 100 backstroke swim and junior Meaghan O’Donnell earned an NCAA B-cut of 1:02.23 in the 100 breaststroke to pace the Irish. Senior Joe Coumos chipped in a season-high 383.78 points in the 3-meter dive to deliver crucial first-place points toward the Notre Dame men’s squad’s cause.

The second and final day of the ACC dual meet between Notre Dame and Florida State is set to commence on Saturday at 2 p.m. at the Morcom Aquatics Center.

“The men’s meet is exactly what it looked like on paper. FSU has the advantage in the relays and sprints, we have the upper hand in the distance and strokes. Hats off to Zach Yeadon for winning back-to-back events in the 1000 and 200 freestyle. Zach is a truly a team guy and that double takes a special athlete. Joe Coumos took his specialty off the 3-meter board along with Rob Whitacre in the 100 backstroke and Matt Grauslys in the 200 butterfly. We took five events and FSU took five tonight, the difference was the 1-2-3 finish in the 200 butterfly and 100 freestyle.”

“We have a great event schedule tomorrow and need to take advantage of it if we are to win out.”

Women’s 1000 Freestyle – Lindsay Stone continued her steady season in distance competition, taking a nine-second victory with a time of 9:54.26. Teammate Molly Treble was event runner-up with a time of 10:03.43, with Reilly Lanigan in fourth place after touching in at 10:17.46.

Women’s 100 Backstroke – Alice Treuth took home the race win with a time of 54:30, good for an NCAA B-cut. Carly Quast added a fourth-place finish for Notre Dame with a time of 55.75.

Men’s 100 Backstroke – Rob Whitacre outpointed the competition with a winning time of 48.65 to just miss an NCAA B-cut. Jack Montesi was third with a time of 49.41, and William Cumberland fifth at 49.96.

Men’s 100 Breaststroke – Steven Shek was the first Irish swimmer to the wall, clocking a time of 56.19 for second place. Garett Clarke finished fifth with a time of 57.10.

Women’s 400 Freestyle Relay – The Notre Dame ‘A’ entry of Abbie Dolan, Skylar Fore, Carly Quast and Sofia Revilak scored a win with a time of 3:21.00. The Irish lineup of Lauren Heller, Rachel Wittmer, Erin Sheehan and Kyra Sarazen scored a second-place finish in 3:23.24.

Men’s 3-Meter Diving – Joe Coumos scored a season-high 383.78 points to take the win off the 3-meter board for the Irish. David Waszakfinished fourth with 286.43 points, and Peter Myers placed fifth with 279.15 points.

Amazing set of guys. I met them last spring.