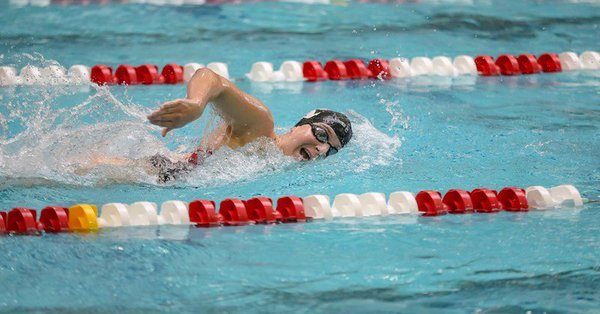 The Northeastern Huskies cruised past Boston University on Thursday, winning 14 out of 16 events on the schedule. Archive photo via Northeastern Athletics, Jim Pierce

Juliusson set a new season-best mark in the 200-yard breaststroke by over 2 seconds, clocking a time of 2:23.38. She posted a season-best time of 1:04.64 in the 100 breaststroke, which ranks third-best in the Colonial Athletic Association this season. Morrison tallied season-best scores on both springboards, finishing with 255.60 on the 1-meter and 255.90 on the 3-meter.

Megan Clark had strong swims for the Huskies, capturing the 50 freestyle (23.41) and the 200 freestyle (1:51.85) events. Clark rallied in the 400 free relay for NU, pushing past BU in the final 50 yards to touch the wall in first place for the Huskies.

The Huskies will swim in the Terrier Invitational, Nov. 22-24, at Boston University.

The Terriers will return to action on Saturday, Nov. 9 for a double-dual against Bryant and UConn at 1:30 p.m.