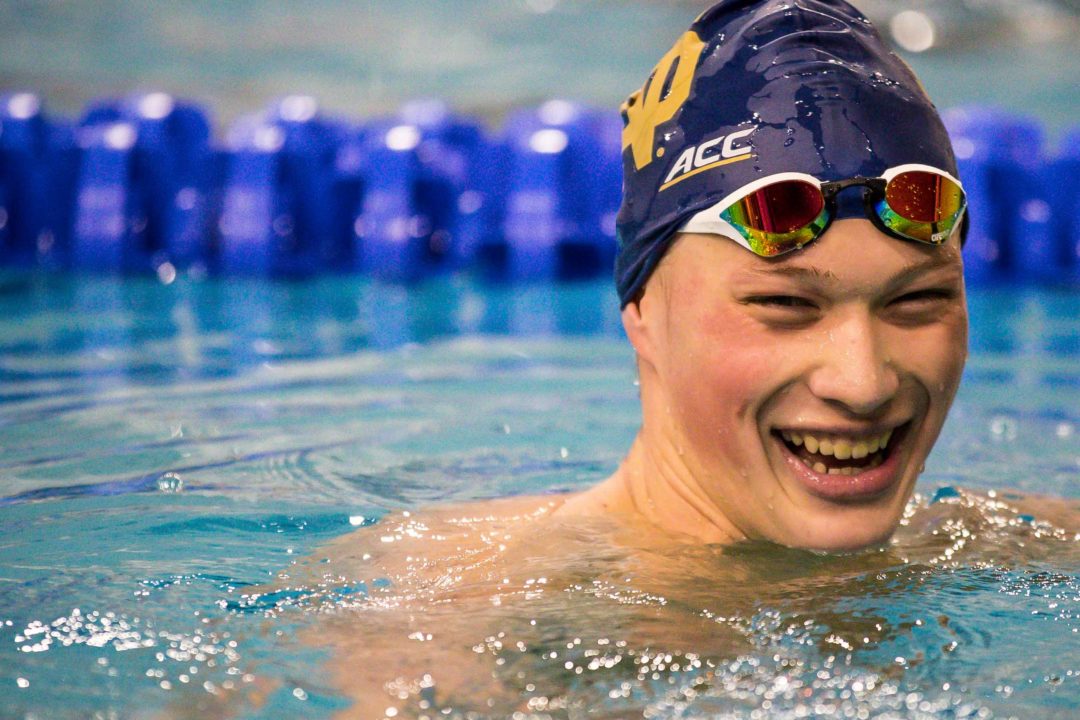 Notre Dame's Zach Yeadon, who was 6th at last year's ACC Championships in the 500, enters this year's meet as the top seed. Archive photo via Jack Spitser/Spitser Photography

Day 2 of the 2020 men’s ACC Swimming Championships will see the top 10 seeds coming into the meet all hold their positions, with very few highly-seeded scratches.

In the men’s 200 IM, Florida State freshman Peter Varjasi, the 11th seed, won’t swim, instead focusing on the 50 free, where he’s the 4th seed.

The top scratch in the 500 free is 15th seed Graham Barrett of Louisville; he only had 3 entries for the meet, including the 200 free and 1650 free, so he might be out for the week.

The top scratch in the 50 free is also the 15th seed, freshman Caleb Duncan, also of Louisville. He still has 3 other entries at the meet, but this 50 free was his highest seed by far, so that probably means that he’s out for the week as well.

The Louisville Cardinals lit the biggest fire on day 1 of the ACC Men’s Swimming Championships, touching first in both the 200 medley relay and 800 free relay, though their 200 medley was ultimately disqualified for an early start by the anchor leg. The Cardinals’ most noteworthy individual races on Thursday morning will come in the 200 IM, where junior Daniel Sos is the 2nd seed and junior Evgenii Somov is the 6th seed. Somov already had a breaststroke split of 23.26 on the 200 medley relay, which was the fastest of the field by four-tenths of a second. Both will be chasing the defending champion Caio Pumputis of Georgia Tech.

Notre Dame’s Zach Yeadon, who swam well on the 800 free relay on Wednesday, is the top seed in the 500 free, and in the 50 free, Pitt junior Blaise Vera will be the top seed.

What was the roster cap for this meet?

Hallock for the upset, he looked wayyy too good in that medley relay last night not to be 19.1 or faster

Can’t count him out for sure.