Nicholas Santos Rockets To Another Sub-23 50 Fly In Brazil 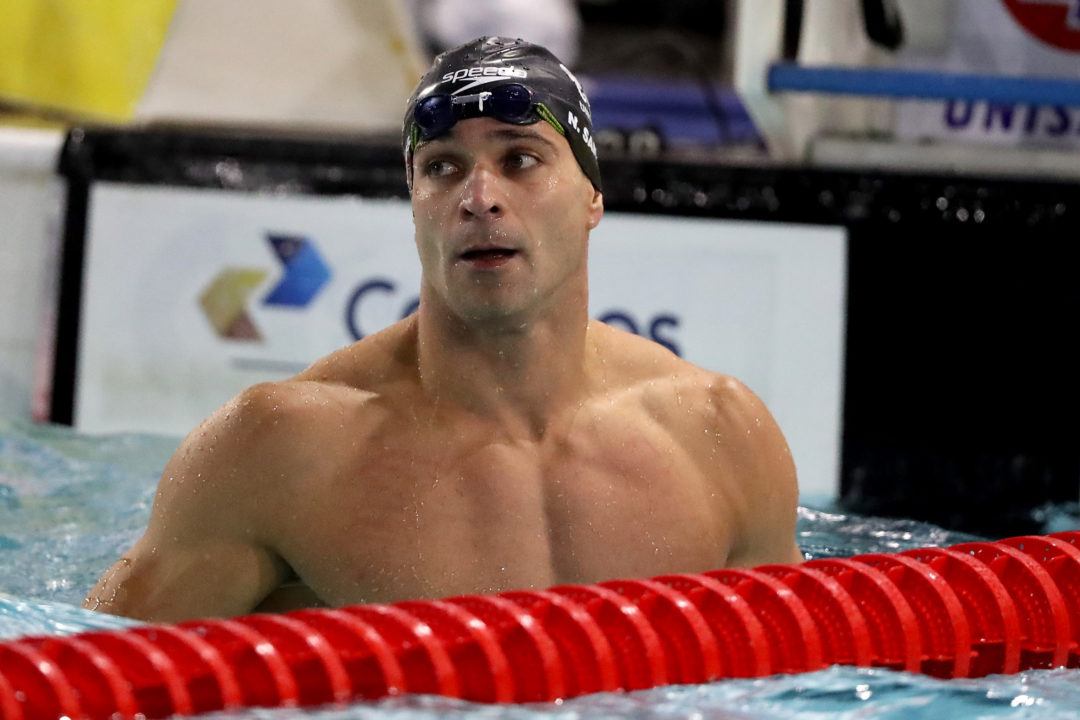 Nicholas Santos won the 50 fly in a time of 22.97 on night 4 of the Jose Finkel Trophy. Current photo via Satiro Sodre/SS Press

The penultimate day of the 2017 Jose Finkel Trophy from Sao Paulo saw a continuation of impressive performances from some of Brazil’s best.

Among the highlights was Larissa Oliveira picking up her second title and third individual medal of the meet after enduring a car accident and surgery in March, Joanna Maranhao winning her third title in a decisive manner, and Brandonn Almeida put on a dominant performance in the men’s 400 IM. In the last individual event of the night, Nicholas Santos posted another scintillating sub-23 50 fly to close things out.

The 400 IM started things off. Almeida sat 2nd after the fly leg, but a world class backstroke leg of 1:01.75 vaulted him to a nearly five second advantage. He only extended his lead from there, touching in 4:13.76 to register a new meet record.

The 20-year-old Brazilian was the 2015 Pan American champion in this event after national hero and continental record holder Thiago Pereira was controversially disqualified. He finished 7th at the World Championships in July in 4:13.00, and holds a best of 4:12.49 from November of last year.

Nearly ten seconds back, his Corinthians teammate Joao Martimbinaco touched 2nd in 4:23.09, with Leonardo Santos of Pinheiros 3rd in 4:23.63.

Swimming out of the B-final, 400m winner Giuliano Rocco uncorked a 1:49.35, a time that would’ve been good for silver. He was a bit too cautious in the prelims, missing the A-final by .05.

Next up it was Maranhao, who was dominant early in the meet in both the 200 IM and 200 fly. She continued her reign over the distance in the 200 back, winning in 2:12.72 to narrowly miss Duane Da Rocha‘s meet record by just over two tenths. Gabriela Albuquerque (2:16.47) took 2nd.

Finally it was the men’s 50 fly, where the veteran Santos went 22.97 for the win. After becoming the 2nd fastest performer ever at the Maria Lenk Trophy with a time of 22.61, the 37-year-old won his second consecutive silver medal at the World Championships in a time of 22.75.

Henrique Martins, who was also in that World Championship final placing 6th, took 2nd in 23.58 with Cesar Cielo getting in there for 3rd in 23.78.

Makes you wonder what exactly?????

People also wonder when they see Ledecky, Dressel, Phelps… etcetera… etcetera… Where they live? What they eat? What they do for training? You know… wonder….

Besides a few of the male swimmers and Medieros, the times at this meet look super close to USA Junior Champs…. Crazy

To be fair, most of Brazils best swimmers are 3wks past their World Champs peak.

So does that make’s it ok to get beaten by juniors???

USA’s talent pool and swimming development infrastructure is insane. Its not fair to compare

PVDH,
you are totally right.And the difference in the number of active swimmers is abyssal.Something like 15-20X more in the US.
Some events(like women’s 400IM), the B final has only TWO swimmers.National champs without even swimmers enough to fill two finals.REALLY BAD.

Ok?? I’m sorry, are you the swimming police?

I guess the fountain of youth resides in the practice pools in Brazil.

Most constant man over 30 in the world