Nebraska Extends Lead to 100 on Day 2 of Big Challenge 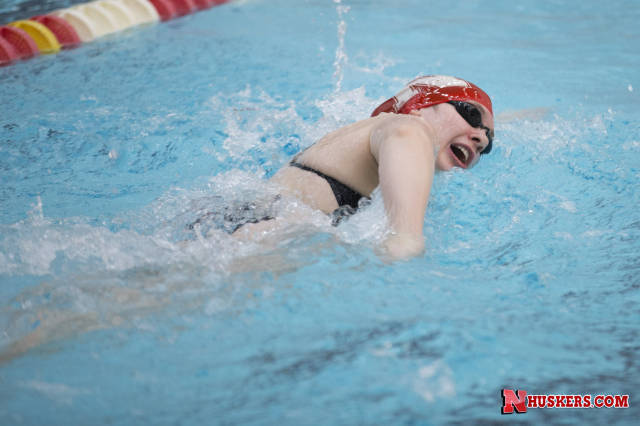 Nebraska head coach Pablo Morales has his butterfly group firing on all cylinders in Topeka. Archive photo via Tim Binning/TheSwimPictures.com

The Nebraska women extended their lead on day 2 of the Kansas-hosted Big Challenge in Topeka, Kansas on Saturday, and now have more than a 100 point margin against their former Big 12 rivals.

Despite the scoring, the Jayhawk women landed a few strong punches on Saturday evening, including one of the best swims in program history.

The day began with Nebraska in the win column, swimming a 1:41.32 in the 200 medley relay. The Jayhawks opened up a big early lead, and despite a 22.13 anchor from Nebraska’s Taryn Collura, Kansas held on for the win by .04 seconds.

Kansas would pick up a second win on the day, this time by a considerably more comfortable margin. Senior Chelsie Miller, who has been a perennial NCAA qualifier and earned Honorable Mention All-America honors last season, swam a 4:12.71 in the 400 IM. That won the race by almost 9 seconds ahead of Nebraska’s Anna McDonald.

Nebraska halted the momentum there, however. Collura, after an electric swim on the relay (though it wasn’t quite enough), swam 53.62 to win the women’s 100 fly – part of a Nebraska 1-2-3 finish in the race.

The result for Collura is just short of her season-ending lifetime best from last year. Second place went to Bria Deveaux in 54.30 – which moves her into 4th-place on the Cornhuskers’ all-time list.

The Nebraska head coach Pablo Morales was the 1992 Olympic champion in the 100 meter fly, and his teams success has reflected in his specialty event.

The women’s 200 free win went to Illinois’ Gabbie Stecker – her second victory following on Friday’s 500 free. Twice at this meet the junior has carefully played her hands in prelims and then exploded in finals for huge time drops.

Kansas’ 3rd win of the day came in the 100 backstroke, where one of their best Yulduz Kuchkarova beat one of Nebraska’s best Jacqueline Juffer 53.09 – 54.99.

Kuchkarova already ranked 2nd on Kansas’ all-time rankings, but this lifetime best improved that standing and leaves her only a second short of the school record. It’s also a new Meet Record.

Kansas finished the day with their 4th win of the session, swimming 7:17.90 to win the 800 free relay. Nebraska took 2nd again, and Illinois finished 3rd.