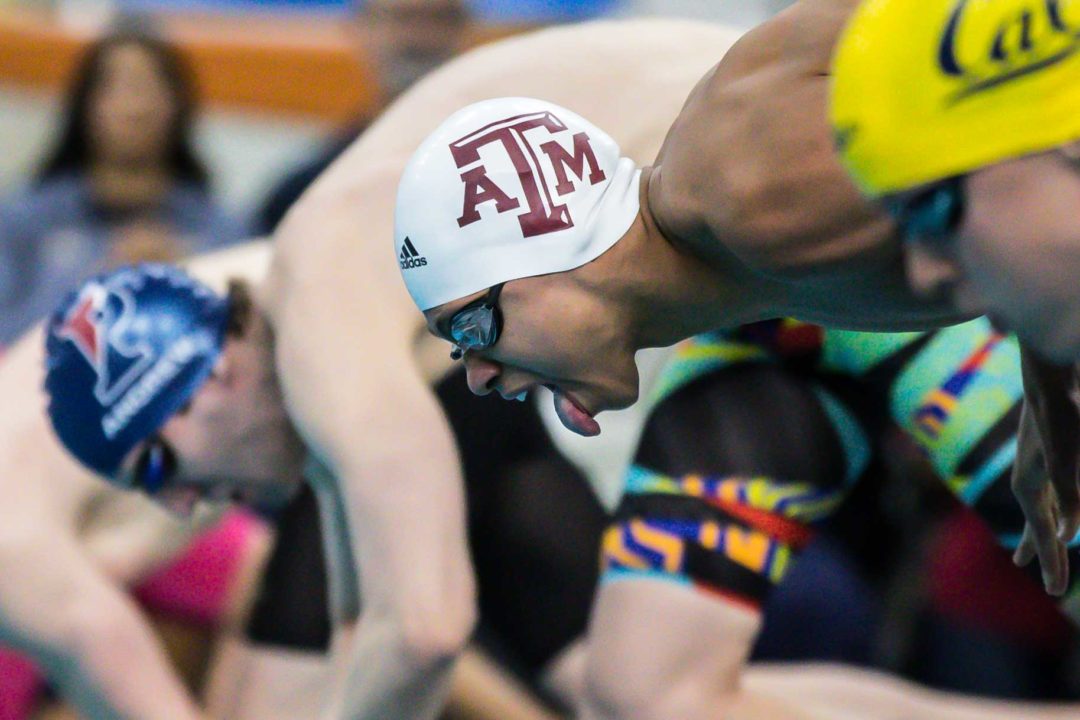 Over the past weekend, the first wave of mid-season invitationals has been swum, shaking up the top times in the NCAA.

Across all events from both genders, all but one top time has been taken over after this past weekend. The outlier is the women’s 1000 free, which is held by Alabama’s Kensey McMahon at 9:42.96. Out of the Ohio State Invite, OSU’s Molly Kowal is McMahon’s closest pursuer with her mid-season time of 9:43.38. The 1000 free isn’t usually race as a standalone event at Division I mid-season invites, so that swim’s survival isn’t a huge surprise.

There’s a bit of a wrinkle in the #1s via the women’s 100 fly, where Maggie MacNeil put up the 4th-fastest performance in history at the Michigan Intrasquad meet on October 18th. By NCAA rules, because there were no other teams present at that meet, it doesn’t count as an official NCAA time, but it is an official time in USA Swimming’s eyes.

While Brown’s sprint freestyle is in a league of her own, there could be a battle brewing at the upcoming NCAAs with Arkansas’ Anna Hopkin. Hopkin tied Brown for the 50 free top spot at 21.19, as well as sits second in the nation in the 100 free at 46.56.

The women’s 100 fly looks to be one of the most competitive events of the season. First we have MacNeil’s 49.57, and Michigan has still yet to compete at the Minnesota Invitational (Dec. 4-7). The only other swimmer to break 50 seconds so far in the season is Tennessee’s Brown, who came the 4th-fastest performer behind MacNeil with a 49.79. Also in the top five times this season are USC’s Louise Hansson (50.05), Virginia’s Kate Douglass (50.30), and Wisconsin’s Nelson (50.65).

One big swim that has slid under the radar is the 1:41.59 in the 200 fly by West Virginia junior David Dixon at the West Virginia Invite. That ranks him 2nd nationally this season, just .14 seconds behind Indiana freshman Brendan Burns.

Another big swim that we should acknowledge is Iowa Central Community College’s Billy Cruz, who frightened the NCJAA 50 free record with a 19.10. If Cruz were to go to a D1 school, he would tie Pittsburgh’s Blaise Vera, who also went 19.10.

Although not an official NCAA event, the top 3 times in the men’s 50 back (lead-off for 200 medley relay), are strikingly fast. World champion Zane Waddell of Alabama leads the way with a 20.91, followed by Casas’ lone #2 backstroke time (21.07), and NC State’s Coleman Stewart.

Below are the top five NCAA teams, determined by scoring out with a championships meet format courtesy of the Finis Swimulator.

After just the first weekend of midseason invites, the Tennessee women and Texas A&M men look to lead the NCAA in a championship meet format (subject to change).

You forgot the SMU invitational

Once again, do you expect anyone to believe that NC State was unrested and unshaved? They got faster at their invite magically?

They were suited and rested but not shaved

Just wait and see BUDDY. Holloway is on a MISSION this year and NO ONE is going to stop him! Don’t mess with a HUNGRY PACK!!!

I only see one team listed in both top 5’s 😉

THE PACK!!! Haters GALORE on this website, must all be UNCrap or UVA fans. LOL

@packattack, try to not turn Swim Swam into just another woe-is-NCState site. The Pack are an NCAA power in swimming and will be for the foreseeable future. Own it and enjoy it and show the rest of Pack nation what it means to be a champion instead of a mediocre whiner.

Where’s Cal??? Neither men or women have got anything to show?

They havent swam an invite meet yet

What about the Iowa Central Sprinter who lead off in a 19.10? Or is that not able to be listed bc it’s NJCAA?

That’s correct. This list is only for NCAA Division I swimmers. NJCAA is a whole different organization.

Doesn’t TENNESSEE have more top individual times than the 4 listed above? Five are at minimum listed there. How many relays too?

Can we get an a3 poll for that?

Literally nothing is worse than DeSorbo Effect coming in and telling us how good Virginia is.

I mean it was this way with Stanford last year. Who was it that kept commenting on them?

“Coach” came in hyping up Stanford every single post.

Tennessee hype is not annoying to me cause I knows the boy VOLS and girl VOLS are awesome. Expecially that the girl VOLS will win SECs this year for the first time in entire history. Now I thinkin the girls VOLS can win NCAAs too!
The real VOLS also can finish in the top 15. GO VOLS!!!!!