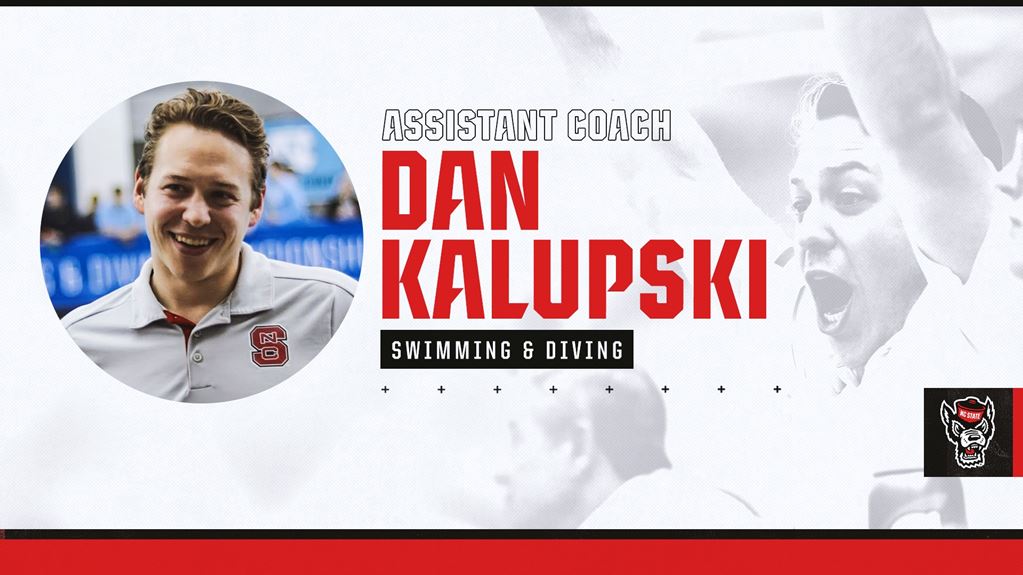 RALEIGH, N.C. – NC State has promoted Dan Kalupski to assistant coach for the swimming and diving program, as announced by head coach Braden Holloway on Friday.

Kalupski earns his title as assistant coach after having spent the last two seasons as a volunteer assistant with the Wolfpack’s swimming and diving teams.

Since joining NC State’s staff ahead of the 2017-18 season, Kalupski has played a tremendous role in working with all training groups and all aspects of the Wolfpack swimming and diving programs. The Pack men and women swept the 2019 ACC Championships team titles, with NC State’s men extending their conference winning streak to five, and both teams went on to tie program-best finishes at the NCAA Championships. The women placed seventh in the nation, and the men secured their fourth-straight team trophy and podium spot with their fourth-place finish at the meet.

Kalupski has had a hand in coaching the Wolfpack to a total of 112 All-America citations between the 2017-18 and 2018-19 seasons, and he was a member of the staff that coached NC State to a program-record five event wins, including three individual national titles, at the 2018 NCAA Championships. In addition to the Pack’s three team wins at the ACC Championships over the course of the past two seasons, Kalupski has been a part of 32 event titles at ACCs in that span of time.

Prior to his time in Raleigh, Kalupski spent two years as the head assistant coach and recruiting coordinator at Massachusetts Institute of Technology (MIT). During his time at MIT, the Engineers achieved 118 NCAA Division III All-America accolades and set 24 new school records. The women’s team achieved its highest national finish in program history in 2017, placing fifth at the NCAA Championships. In addition to handling several administrative duties, he also ran the team’s dry land program.

Kalupski spent the 2014-15 season as an assistant coach for the men’s swimming and diving team at DePauw University. While there, he was tasked with developing and implementing a strength and conditioning and dry land program, in addition to running all aspects of social media for the team.

A native of Chicago, Ill., he completed his Masters of Science in Sports Management from Indiana State University in 2016. Kalupski completed his undergraduate work from UW-Stevens Point with a business degree and coaching minor. He was a four-year member of the university’s swimming and diving team, serving as a captain during his senior season. Kalupski helped lead the team to its 14th-straight WIAC championship at the end of the Pointers’ 2012-13 campaign.

EPIC hire and an even more EPIC man. The Wolfpack knocked it out of the park with this one.

He’s got the best hair in the ACC