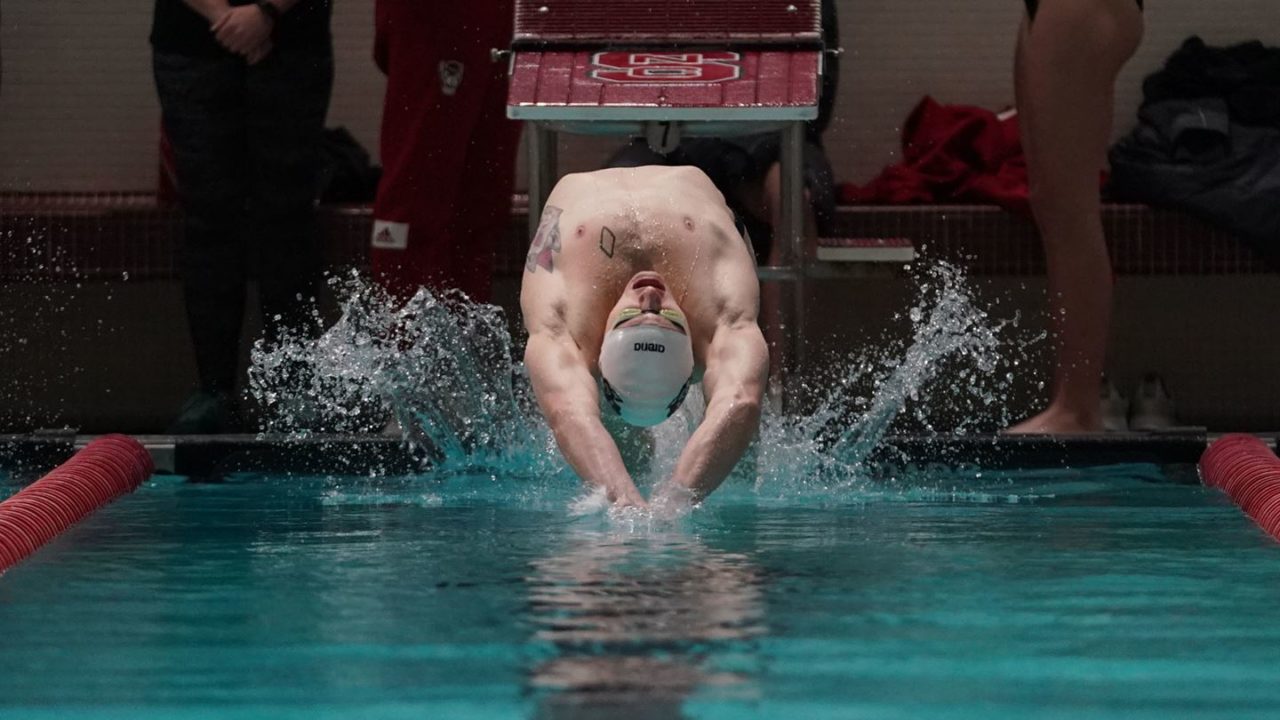 The Wolfpack men and women will head to Charlottesville to take on the Cavaliers coming off of a pair of sweeps against UNC and Duke. Current photo via NC State Athletics

RALEIGH – The NC State men’s and women’s swimming and diving teams are set to travel to Charlottesville, Va., on Fri., Jan. 24 to take on the Virginia Cavaliers at the University of Virginia Aquatic Center.

The first diving events are set to begin at 1 p.m., and the swimming events will start at 4 p.m. The meet will be streamed live on the ACC Network Extra beginning at 4 p.m.

PACK IN THE POLLS:
The women’s swimming and diving team is tabbed at No. 3 in the latest College Swimming & Diving Coaches Association of America (CSCAA) Dual Meet Poll, which marks the highest ranking in program history for the women.

The women jumped three spots from the previous poll, which was released on December 11, to become the top-ranked squad in the ACC of five teams featured. The squad has not fallen outside the top seven during the 2019-20 season.

Additionally, the men check in at No. 7 as the highest-ranked ACC team, and have not wavered outside the top seven spots over the course of the 2019-20 season.

ACC SWIMMER OF THE WEEK:
After winning three individual events over the course of two days, senior Makayla Sargent was named ACC Women’s Swimmer of the Week. The honor marks the first time in her Wolfpack career that she has been named conference swimmer of the week.

SCOUTING THE CAVALIERS:
Virginia enters the meet with both of its teams ranked in the top 17 of the national poll.

NC State’s men have won the last five dual meets against the Cavaliers, and they have only dropped one decision to Virginia under head coach Braden Holloway‘s leadership.

Great that ACC and ESPN are streaming this event! Let’s hope we see more ACC swim meets get this coverage!

But if you live in the comcast area, good luck getting to view it… it’s a black hole for ACCN and you will never get to see it unless you use some tricks on the internet to make it appear you live on the other side of the world.

You can go to https://getaccn.com/ or google “get ACCN” and you can get a short or sometimes free subscription to HULU or one of the other providers and then connect to ACCN via ESPN. I’m a comcast person too and they don’t have it. I just did this last weekend for another ACCN event and it worked great.