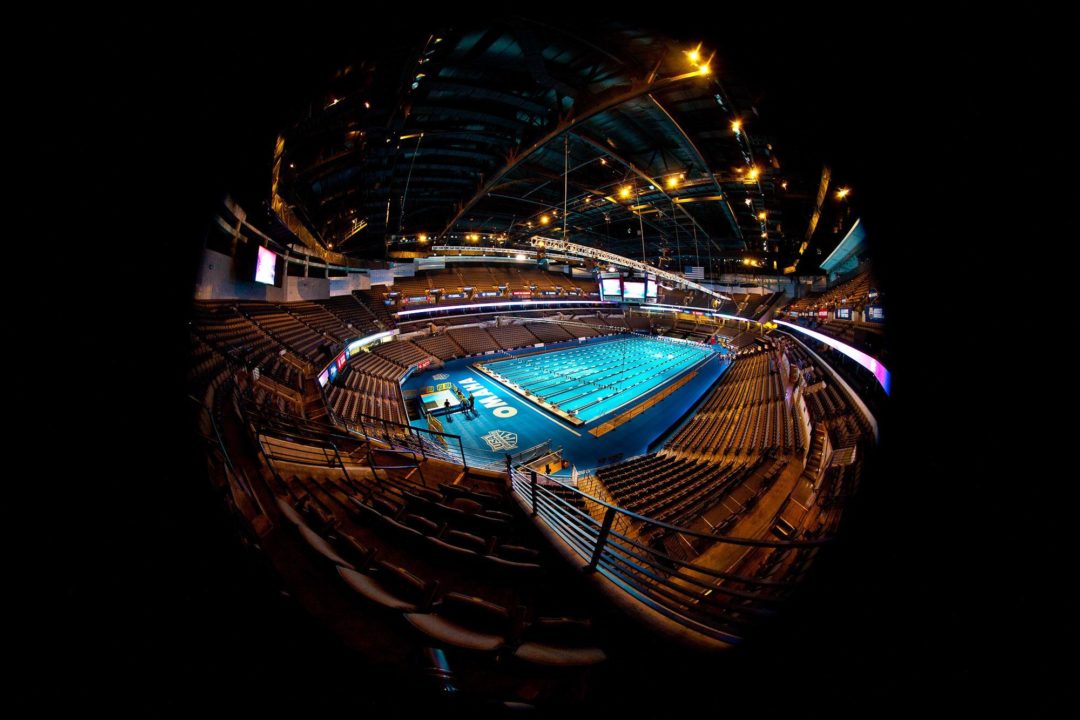 NBC will televise a record 85.25 hours of U.S. Olympic Team Trials this June, including live airings of all 12 nights of the swimming trials. Stock photo via Tim Binning/TheSwimPictures.com

NBC Olympics has announced the United States television schedule for the 2021 U.S. Olympic Swimming Trials, which is part of a record 85.25 hours of programming. That’s the most ever for the U.S. Olympic Team Trials across all sports, topping the 76.5 hours of coverage in the leadup to the Rio Olympics in 2016.

Including 13 nights of primetime coverage on the flagship NBC network, NBC Olympics will present in total 22 days of Olympic Team Trials coverage. In addition to the Wave II swimming coverage, NBC will also air Trials events from gymnastics, track & field, and diving.

Under the new USA Swimming Olympic Trials plan, the slower qualifiers, about 882 of them so far, will race at the Wave I meet from June 4-7. The finals sessions of each day of that meet will air live at 8PM Eastern Time on the Olympic Channel.

The top 2 finishers in each event at that meet will join the swimmers who hit a faster time standard – about 650 swimmers so far – at the Wave II meet from June 13-20.

That new Wave I meet accounts for the additional hours of programming, though only finals will be televised.

NBC Sports, a cable network that is shutting down at the end of 2021, will air a taped-delay replay of the heats on television each day of the meet in the evening before the live finals on the free-to-air NBC primetime network. NBC will show the Trials at 8PM Eastern time, except on the west coast where they will be tape-delayed to 8PM Pacific Time daily.

Have no fear – for the most interested fans, including most of our audience – 24 hours of live prelims coverage will stream on NBCOlympics.com and the NBC Sports App for the Wave II meet. Prelims of the Wave I meet will also stream live on usaswimming.org

All television coverage will also stream live on NBCSports.com and the NBC Sports app.

NBC Olympics will present 10 hours of gymnastics coverage over four consecutive days and nights from St. Louis, Mo., including more than six hours on NBC. Live coverage begins on Thursday, June 24, with the men’s competition at 6:30 p.m. ET on NBCSN and will culminate on Sunday, June 27, with live primetime coverage of the women’s final at 8:30 p.m. ET/PT on NBC.

In addition to streaming all 10 hours of television coverage, NBCOlympics.com and the NBC Sports app will present additional cameras on all apparatus during live coverage for a multi-view streaming experience.

The women’s team, which has won gold in the team all-around at the past two Olympic Games, is expected to be led by the most decorated American gymnast in history and four-time Olympic gold medalist Simone Biles, who has a chance to tie or break the all-time record for gold medals won by a U.S. woman (8). Alongside Biles at the Team Trials is expected to include four-time world medalist Jade Carey, who has mathematically secured an individual spot for Tokyo, as well as three-time world medalist Suni Lee. On the men’s side, Team USA is anticipated to be led by two-time Olympian Sam Mikulak. Other contenders include 2017 U.S. all-around champion Yul Moldauer and 2019 world team member Shane Wiskus.

NBC and NBCSN will provide 20.5 hours of track & field qualifying, semifinals and finals coverage over eight nights, including six in primetime on NBC. Track & field coverage from Eugene, Ore., begins on Friday, June 18, at 7 p.m. ET on NBCSN, with qualifying, and continues at 10 p.m. ET/PT on NBC, with the finals in men’s shot put and men’s 10,000m. Live coverage concludes on Sunday, June 27, at 7 p.m. ET/PT on NBC with numerous events, including the men’s 200m and women’s 400m hurdles finals.

14 hours of live diving coverage, including six nights in primetime, will be presented across NBC and Olympic Channel: Home of Team USA. Live coverage begins Tuesday, June 8, at 7 p.m. ET on Olympic Channel: Home of Team USA with the women’s springboard and men’s platform semifinals from Indianapolis, Ind. Trials coverage culminates the weekend of June 12-13 with the men’s and women’s springboard and platform finals, all live on NBC, including both nights in primetime.

NBCOlympics.com and the NBC Sports app will present 10 hours of exclusive semifinals and preliminaries diving coverage.

The men’s team is expected to be led by four-time Olympic medalist David Boudia, who is aiming for a fourth Olympic appearance in Tokyo, and 2016 Olympic silver medalist Michael Hixon. On the women’s side, 2019 world bronze medalist Delaney Schnell as well as 2021 and 2019 world silver medalist Sarah Bacon lead a deep pool of contenders.

A good training for me before Tokyo and the shameful finals in the morning there (in the middle of the night here in France). With swimming and track and field olympic trials I will not sleep a lot between June 13 and June 27.
I miss the free live webcast of prelims on the USA swimming website back in 2008 and available everywhere in the world.

Is there no way for viewers outside the US to watch the trials live? 🙁

is there any way to CLEAR UP the page at the top right? I cannot read who is doing the coverage do to photo overlays.

THANKS FOR THE CLEAN UP!

Well you’d hope, since the whole Olympic swimming schedule is turned around because of NBC!

I KNOW WHERE MY 3 WEEKS OF VACATION ARE GOING TO BE SPENT THIS SUMMER – WOW!