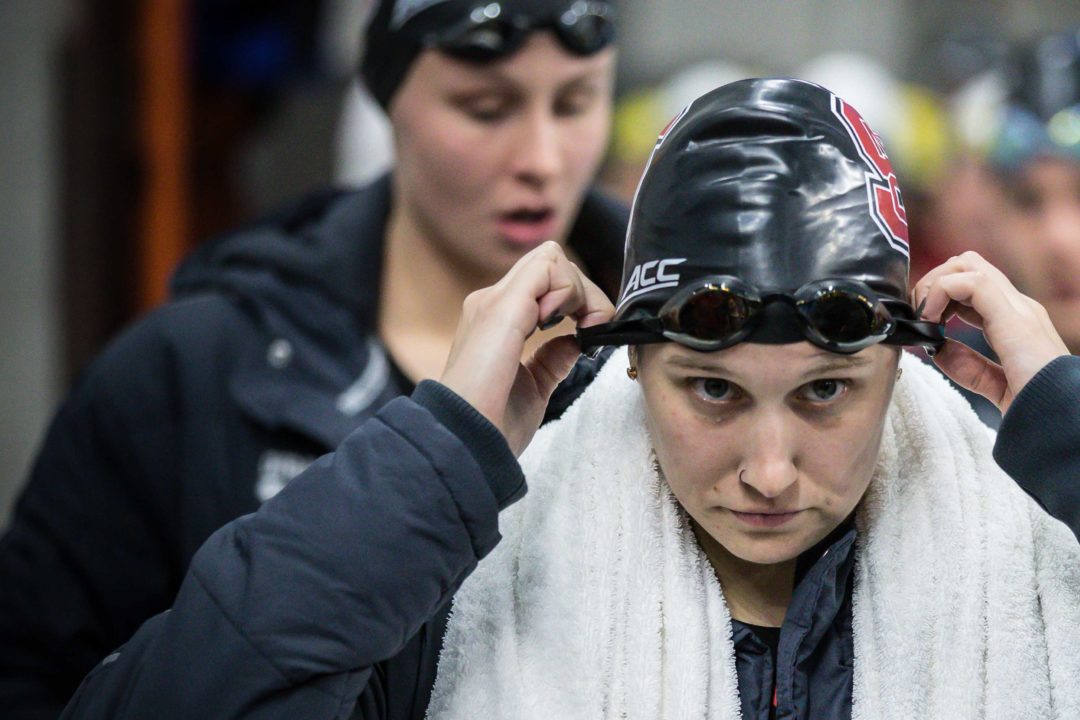 Haan has played an important part on the NC State Women’s swim team over the past three years, and lowered the school record in the 100 backstroke to a 50.42 at the 2018 NCAA Championships for a 4th-place finish.

Haan was also a vital relay member during her time at NC State, and contributed vital backstroke legs to four ACC title-winning NC State relays from 2017 to 2019.

Before Haan was a member of the NC State Wolfpack she was the CCSA Swimmer of the year in 2016 for her performances at the CCSA Championships as a member of Florida Gulf Coast University’s swim team, where she won individual titles in the 100 back, 200 back, and 100 free. She was also the only FGCU swimmer to score at the NCAA Championships in 2016.

Haan placed 3rd in the 50 back and 6th in the 100 back at the 2018 U.S. National Championships, punching her ticket to the 2019 World University Games in Italy, which took place in July. In Napoli, Haan placed 2nd in the 100 back to future Wolfpack swimmer Katharine Berkoff. Haan also claimed silver in the 50 backstroke. Haan also contributed a 59.88 lead-off leg in the prelims of the women’s 4 x 100 medley relay at WUGs, which, utilizing a different lineup in finals, won gold.

Haan has been one of a number of American female backstrokers that have rattled world rankings over the past couple years. While the American men generally get the recognition for longevity in terms of defending Olympic gold medalists, the American women’s scene is just as–if not more–cut-throat than the men’s, as evidenced by recent World Records and the fact that 8 American women rank top-20 in the world this year in the 100 and 200 bacskstrokes.

This is my official peace out post (featuring Ky-lee). I was not aware this time was coming as soon and as quick as it did but I have decided to retire from swimming. In a quick message I’d to thank everyone who has ever helped me in my career whether it was pushing me to be a better athlete or a better person. It truly takes a great support system to push one to the levels that I have taken my career and I couldn’t have asked for a better group. I am humbled by the experiences swimming has brought me and will forever cherish them. Thank you, all!

I agree that it must be frustrating for american women in the backstroke. If you can’t swim 58 low then you probably have no chance to qualify for the olympics and maybe this led to Haan losing her motivation.

You never know what will happen in a year. Baker had an injury this year and was off this summer. It is open to anyone even though there are some that seem more likely based on the times from the last 12 months.

Congrats Elise on a wonderful career!! Will miss seeing you in action.

This is baseless as hell and I’m not pretending to know anything, but that post reminds me of Shayna Jack’s.

Obviously there could be a billion things that makes someone retire abruptly so I’m just bein’ a jackass rn, mostly.

If it’s ‘baseless as hell’ why would you accuse someone of using PED? There are hundreds off athletes ending their careers for any reason on daily basis.

I mean, I assume every elite athlete is on something, though. (Had the realization after Lance Armstrong – if every single rider he’s beating is doping, how is he *not*?? Obviously it’s not as bad in swimming, it seems, but who knows.)

You think Dressel, Pieroni, Apple, Dean, King, Manuel, etc… are on some juice? Maybe, just maybe I could see an argument for Dressel and Manuel because their bodies legit look different. The others have pretty “normal” looking bodies and time progressions. This is quite the statement, even for you, Mr. Nolan

Oh, it has nothing to do with what you look like. Dee Gordon got popped for PEDs in baesball and he’s listed as 5’11”, 170lbs. (Point being, he is a very tiny man when compared to professional athletes.)

I just say I assume everyone’s on something, but that doesn’t mean I expect they are. It’s more, I wouldn’t be shocked if anyone tests positive at any point when you’re at that level.

I don’t think every elite athlete is doping. In some sports that aren’t very competitive it certainly is possible to be elite without doping. I think in swimming, cycling and athletics it is impossible to be elite without doping. Even if you think that all elite athletes are doping, then why do you feel the need to mention it here? (I don’t really see the connection)

Most athletes probably are taking supplements or other things and sometimes those are contaminated. Some are taking things that are illegal on purpose.