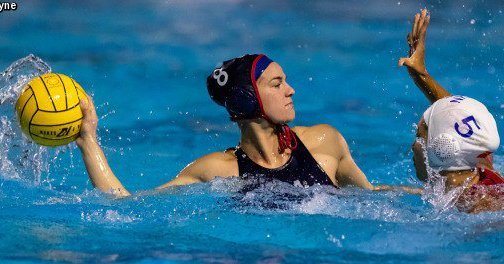 Canada and the United States will meet with the Pan American Games women's water polo gold medal on the line on Saturday. Current photo via USA Water Polo

Canada and the United States will meet with the Pan American Games women’s water polo gold medal on the line on Saturday.

The Americans will be vying for their fifth straight gold, while Canada is seeking its first since winning the inaugural title in 1999. The USA bested Cuba 31-7 in the semifinals, while the Canadians topped Brazil 19-5.

In other Saturday contests, Mexico will meet Puerto Rico for fifth place, while Venezuela will take on Peru for seventh.

Mexico grabbed a quick 5-1 lead in the first quarter and weathered a 3-1 rally by Venezuela in the second before closing out the 13-6 victory with a final 7-2 push in the second half.

Mexico cashed in on 13 of its 32 shots (40.6 percent), including 2 of 7 extra-player tries. Itzel Diaz de Leon Briano led the way with four goals, while Ana Ramirez Hinojosa turned in a hat trick. Goalkeeper Lizli Patino Bueno saved 53.8 percent of the shots she faced (7 of 13).

Dulce Hernandez paced Venezuela with three goals, while Soleylin Martinez, Yineldy Araujo and Jeisnaimil Agelvis each found the back of the net once. Venezuela put in 6 of its 26 shots (23.1 percent), including 2 of 7 extra-player tries and 2 of 3 penalty attempts.

Puerto Rico got off to a 3-0 start and led 7-1 at the half, before cruising down the stretch in a 15-4 victory over Peru.

Puerto Rico made 50 percent of its shots (15 of 30), including 3 of 6 extra-player tries and 4 of 5 penalties. Amanda Ortiz Irizarry put in five goals, including three penalties. Guarina Garcia Delgado added a hat trick and Milena Guzan Ortiz notched two goals among eight scorers.

Canada built a 9-4 halftime lead and outscored Brazil 10-1 in the final 16 minutes to claim a spot in Saturday’s gold medal match.

Canada converted 59.4 percent of its shots (19 of 32), including 7 of 10 extra-player tries and its lone penalty attempt. Axelle Crevier scored four times, while Monika Eggens, Joelle Bekhazi and Shae Fournier each notched hat tricks. Eight different players scored for the Canadian side.

The Americans wasted no time staking their claim on the game, jumping ahead 9-2 in the opening quarter. The United States led 14-5 at the half, but poured on 11 unaswered goals in third period and six more for good measure in the final stanza of the 31-7 win.

The 31-goal output was the highest so far in the competition, surpassing Canada’s 28-2 victory over Peru in group play.

The USA converted 67.4 percent of its shots (31 of 46), including 6 of 9 extra-player tries. Aria Fischer put in seven goals, while Makenzie Fischer scored five times and Maddie Musselman and Stephanie Haralabidis chimed in with four apiece. Rachel Fatal scored a hat trick as 10 players, including goalkeeper Ashleigh Johnson, managed a goal. In addition to contributing offensively with an action shot goal, Johnson stopped 46.2 percent of the shots she faced (6 of 13).

Madonni Chavez Pena notched a hat trick and Mayelin Bernal Villa added two goals as Cuba made 7 of 18 shots (38.9 percent). The Cubans made good on 1 of 2 extra-player shots and converted its lone penalty attempt.