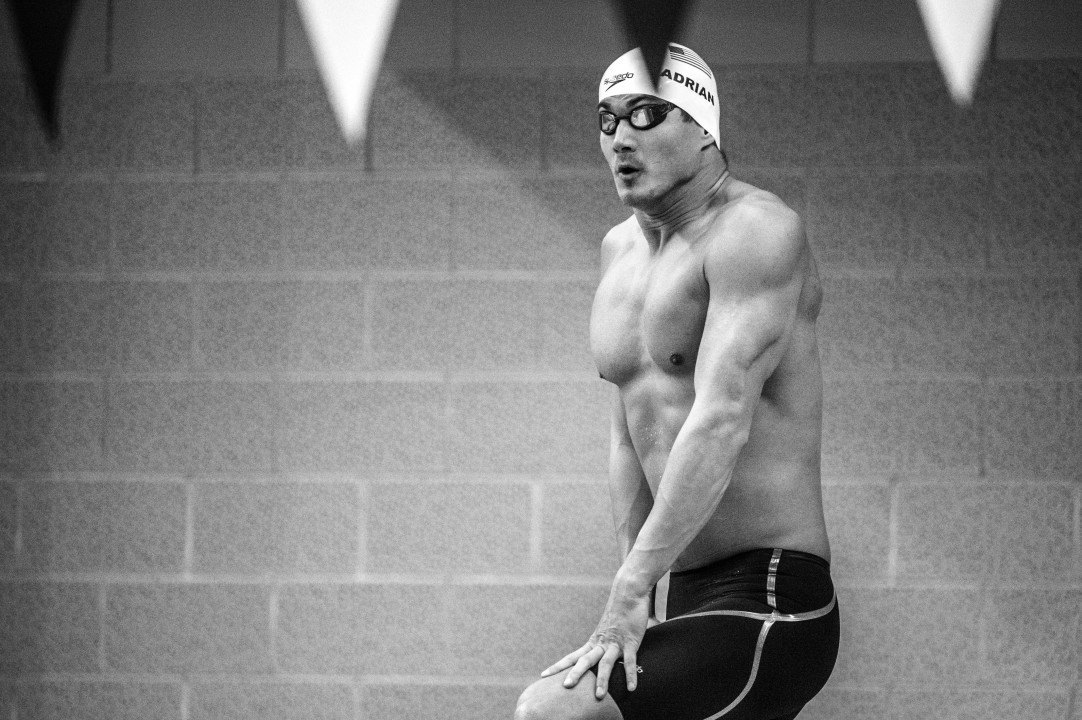 Nathan Adrian put on a show on Friday evening in Minneapolis at the 2015 Arena Pro Swim Series meet, showing that after a scratch of the World Cup tour the wait was worth it.

Adrian swam a 21.56 in the 50 meter freestyle to become the first swimmer ever under 22 seconds in the historic University Aquatic Center pool on the Minnesota campus. The old Pool Record was a 22.00 done by Jason Lezak in 2002.

This stands as one of the 25 fastest textile-suit 50 meter freestyle swims ever, the first sub-22 in the world in the new season, and the 6th-fastest swim ever done by an American.

But here’s a more subtle, if Bob-Uecker-in-Major-League-esque, statistic.

Adrian’s swim is the second-fastest ever done by anybody anywhere in the world in the month of November, according to USA Swimming records.

The only swimmer who has ever been faster in November was a flukish swim by a 30-year old Australian Ashley Callus in 2009 in the waning months of the rubber-suit era, where the whole world was taking a last dash at records before the suits went away. He swam a 21.24 and 21.19 at the 2009 AIS Speedo International meet, which still stand as the two fastest times in Australian history.

This is somewhat of an odd time of year for long course swimming, because typically most of the world is in the short course pool at this time of year, be it in meters or yards depending on where a swimmer is in the world.

The point is that for any meet in the first half of a season, before the start of a new year, this is a huge early-season harbinger for Adrian’s Olympic hopes. It’s rare to exhibit this much speed at this time of year – even stretching the time frame to 7 months, Brazilian Bruno Fratus in 2014 (21.41) is the only swimmer who has been faster than this swim during any time from September through February.

Due to the fickle nature of the 50 free, Adrian won’t be resting easy on this early-season sprint. Another big data point will come in the next few weeks in Brazil on the first leg of their multi-part Olympic qualifying process, and still more will come from Europe and Australia when the new year comes and more countries put in their championships.

We’ll also learn more on Saturday, when Adrian swims the 100 free – an event in which he’s the defending Olympic Champion but as just 7th at Worlds. If Adrian gives a sign that he’s on track to crack the 50/100 double at an international level, this 50 will take on even greater significance as a torch toward Rio.

Fastest he’s ever been at this point in the season I believe, a good sign for the summer.

Top 25 fastest ever? I don’t believe so

Textile swims ever, I think. Suit times are irrelevant.