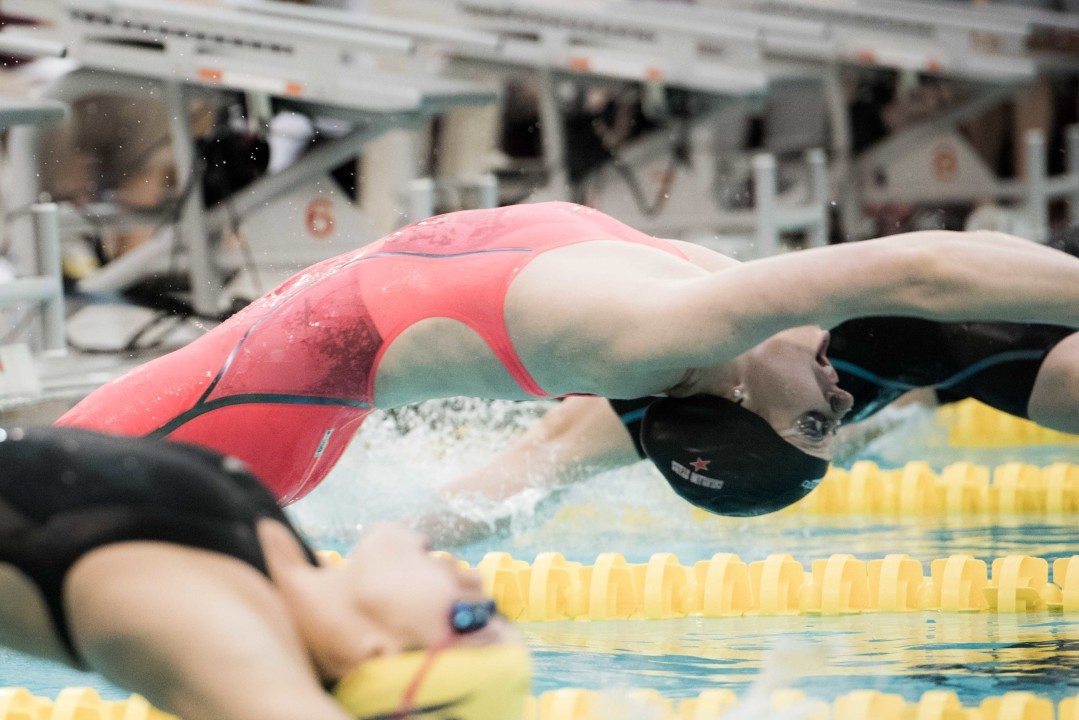 Missy Franklin will race in the championship final of the women's 100 meter backstroke tonight.

In the consolation final it was a battle between Cal’s Caitlin Leverenz and Stanford’s Maya DiRado for 150 meters. North Baltimore’s Sierra Schmidt had a great final 50, and closed ground on the two leaders. Leverenz got the touch in 2:12.19; Schmidt ended up second in the heat with 2:12.80, just ahead of DiRado (2:13.05).

Michael Phelps of North Baltimore, seeded second behind teammate Chase Kalisz after the morning’s heats, looked ready to take control of the championship final. Phelps turned first at the 50 wall and at the 100 wall, about a body length ahead of Kalisz. Kalisz, an excellent finisher, closed the gap over the second half of the race and wound up getting to the wall just ahead of the world record-holder. Kalisz went 1:58.07 for the win; Phelps was second in 1:58.38.

Four women came in to the wall at the same time, and it was impossible to distinguish with the naked eye who touched first. But Sesi’s Etiene Medeiros got her hand on the pad before the others, going 24.92 for the win. Simone Manuel (24.94) was just .02 back; she was followed by Abbey Weitzeil of Canyons (25.07) and Farida Osman of Cal (25.09).

Nathan Adrian of California Aquatics crushed the pool record and posted a world top-3 time when he won the men’s 50 free in 21.56. Second place went to Canyons Aquatic Club’s Santo Condorelli with 22.24, .03 ahead of Tucson Ford’s Brad Tandy (22.27).

Club Wolverine’s George Bovell clocked a 22.44 for fourth place ahead of teammate Geoff Cheah (22.71). The rest of the championship final consisted of Marcel Chierighini of Auburn (22.75), Joao De Lucca of Cardinal Aquatics (22.82), and Elvis Burrows of Trinity Prep (22.86).

The consolation final went to Michael Andrew of Indie Swimming with 22.44; Karl Krug of SwimAtlanta and Kenta Ito of Trojan Swim Club tied for second in the heat, both touching in 22.82.

Missy Franklin of Colorado Stars had a phenomenal finish to win the championship final of the women’s 100 back. Franklin turned third at the 50 but came back in 30.3 to post a world top-5 time of 1:00.18 for the win.

David Plummer of New York Athletic Club, who had set the pool record in the morning’s heats, went out quickly and established a huge lead over the field by the 50 turn. Plummer ended up coming home just a tad slower than in the morning and finished with 52.85, .02 off his morning time. Plummer holds the second-fastest time in the world so far this season with 52.51 from the FINA Grand Prix in Dubai last week.

Kierra Smith broke another pool record and moved into the world’s top 5 by clocking a 2:24.36 to win the championship final of the women’s 200 breast. Smith was dominant from start to finish, continuing to build her lead with every 50. Minnesota’s Haley Spencer got her hand to the wall just ahead of Toronto’s Martha McCabe, 2:26.92 to 2:27.13, for second place.

T2 Aquatics’ Justine Bowker had a great race to win the consolation final in 2:30.85. Rachael Bradford-Feldman of Louisville came in second with 2:32.55, while 15-year-old Lara Bate from NBAC went 2:32.64 from out in lane 8 to pick up third in the heat.

Louisville’s Carlos Claverie won a tight race in the championship final of the men’s 200 breast, going 2:10.86 for a FINA “A” qualifying standard. He was out with a body length’s lead over the field at the 100. Nic Fink of Athens Bulldog Swim Club roared back over the second 100, though, and nearly caught Claverie at the end. Fink came up .07 short though, and finished second with 2:10.93. His 2:08.89 from the FINA World Cup in Paris last August is still the season’s best performance.

Mizzou’s Sam Tierney crushed his second half and won the consolation final with 2:14.61. Guillermo Blanco of Purdue touched out Richard Funk of Club Wolverine, 2:17.11 to 2:17.33, for second place.

Another race, another pool record for NCAP’s Ledecky. Ledecky was out a tad faster tonight than in heats, and she came home harder as well. Ledecky split 1:59.13/2:03.42 to establish not only a new pool record of 4:02.67, but also the fastest time in the world so far this season.

Leah Smith of Virginia was only 1/100 off her personal best, finishing in second place with 4:04.67, also a world top-3. Smith was two body lengths behind Ledecky at the 300 wall, but she outsplit her by a second on the seventh 50 and began to move up on the world record-holder. Ledecky, who breathes to her right, clearly saw Smith gaining on her as they raced for home; she put her legs into it and finished with 29.55, more than 2 seconds faster than her previous 50.

Sierra Schmitt of NBAC successfully held off a challenge from Melanie Margalis of Saint Petersburg to take the consolation final in 4:11.33; Margalis was 4:11.52.

Trevor Carroll of Louisville earned the fifth spot with 3:57.88. Michael Weiss of Wisconsin and True Sweetser of Gator Swim Club tied for sixth with 3:58.19. Grant Shoults of Missio Viejo came in eighth with 4:02.16.

I’m here to watch a good moment of sport and also to say to the monsters who have just attacked my country tonight : “YOU WILL NEVER WIN! You want to install the fear in all our democracies but no, our democracies are much stronger than you!”

Life must continue and I can’t wait to watch the best swimmers of the world.
Good night of swimming to everyone.

Thanks for checking in bobo, we’re happy to hear you’re ok.

Power to your people Bobo, and everyone who has to endure this only to show they will not bow to senseless violence.

Feeling for u Bobo – I live 300 kms from Paris and in 2006 i went to the Bataclan watching my favorite band … we feel all concerned with you guys >
Besides this , what a race that was between MP and Chase ont he 200 butterfly – Super final 50 . That bodes well for the rest of the evening .

Thanks everybody, on behalf of French people, for your kind words.

they look to have been logging in the canadian woods …. LOL

For Phelps to be 1:58:38 already in November is incredibly exciting. In comparison, he was mid 1:57 in Santa Clara in June last season. Good signs for what’s to come.

Plummer and Adrian look to be feeling strong as veterans . Very good signs