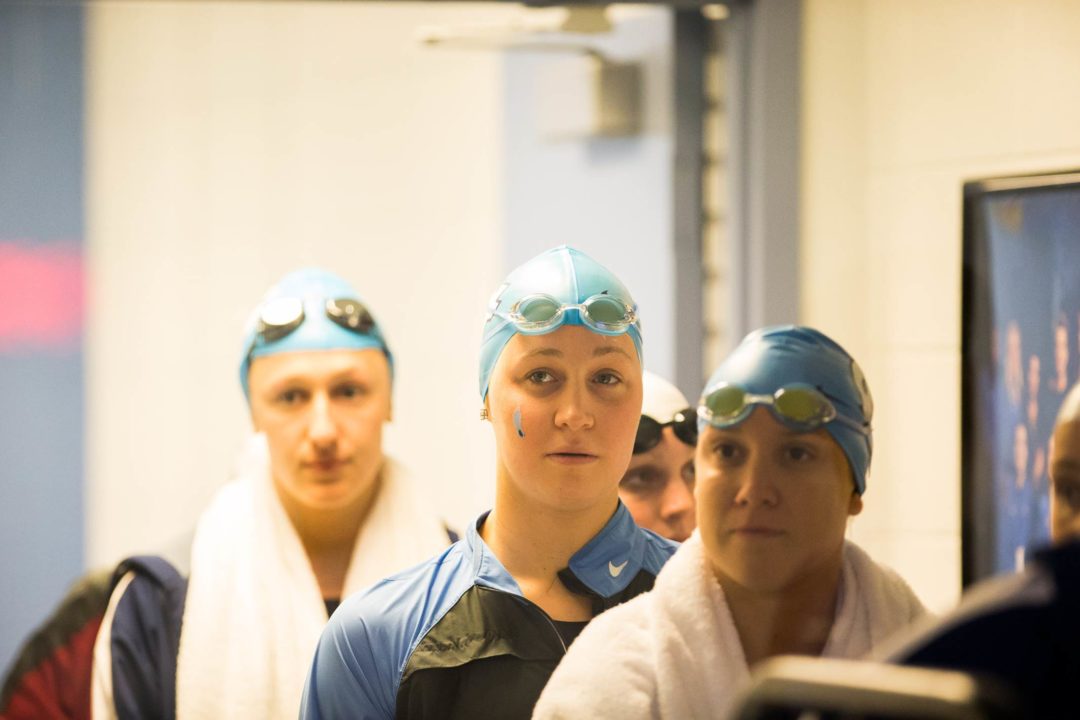 Ally Hardesty and the North Carolina Tarheels are the biggest movers in our latest power rankings, but a familiar team still stands on top Archive photo via Tim Binning/TheSwimPictures.com

A fair amount has happened since our since our first set of 2015-16 NCAA Women’s Power Rankings three weeks ago.  In particular, the top sprinter in the country is redshirting, and North Carolina has temporarily transformed into a steamroller.  Of course, with invites right around the corner, including the ongoing Arena Pro Swim Series in Minneapolis, we expect things to shift again.  In the mean time, here’s our latest rankings:

Fell just short of Arizona, but they’re ahead of where they were at this point last season.  The Bruins will have two fall invites to show their stuff: next week in East Los Angeles and at the beginning of December at the Texas Invite

Ramping up for the Tennessee Invite next weekend.  In a year where breaststrokers seem to be few and far between, Mizzou quietly has one of the best breaststroke duos in the country in Abby Duncan and Katharine Ross.

No big change here; the Gophers took care of business against Iowa, and have a great opportunity to swim fast this weekend in their home pool at the Pro Swim Series meet.

Finally got back in the win column with their victory over South Carolina, but questions remain: how do the Gators not a have a breaststroker (100 or 200) in the top 50 nationally?

Looked great in their one and only meet (Virginia and Penn State) since our last posting.  Siobhan Haughey (48.45) and Ali Deloof (48.72) currently sit 1st and 4th nationally in the 100 free.  We won’t hear from them again until AT&T Winter Nationals, but all signs are positive at this point.

Haven’t competed since October 16th.  They face Indiana this afternoon and Northwestern tomorrow.

Narrow loss to Tennessee before running into the North Carolina buzz saw.  Their sprint problems (nobody under 23.4 or 50.9) could come back to bite them.  The Hoosiers finish off their brutal fall dual meet schedule (Texas, Florida, Kentucky, Tennessee, UNC, and Auburn) this weekend against Wisconsin.

Narrow loss to USC, but this is a young team moving in the right direction.  Freshmen have been top performers in 6 of 13 individual events.

Rebounded from their ugly loss against NC State nicely with wins over Arizona and Arizona State.  Sprint issues remain; Anika Apostalon is the only swimmer under 23.3 and 50.8 this season.

Probably the most impressive fall in the NCAA, with wins over Louisville, Tennessee, and Indiana after their 4-point loss to open the season against Georgia.  They have another big test this weekend against #5 Texas.  The big question, though: is this smoke and mirrors, or will they come through in March?

Continued to look good in their take-down of Indiana.  Ashton Ellzey (already 22.61 this year, just 0.02 off her best time) gives the Tigers a solid 1-2 sprint punch with Allyx Purcell.

The Volunteers are 2-3 over the last three weeks, with their losses coming to red-hot North Carolina and Louisville.  As usual, the medley relays look like they’ll be the money-makes for Tennessee; Kira Toussaint has shored up the previously-questionable backstroke spot.

The Wolfpack dismantled the Florida State Seminoles (winning all but one event and recording seven 1-2 finishes) in their only competition since the last set of power rankings.  Their first real test in the heart of the season is this weekend against North Carolina and Texas.

Showed some of their depth issues in their loss to Texas, but still have plenty of high-end talent, led by Beryl Gastaldello.  The Aggies are off this week, and will next be competing at their home invitational.

Have to dock them for getting flat-out beat against #11 North Carolina… but this happened last year, too. The week before, however, they took down a pretty good Tennessee team.  Next up: the rest of the Minneapolis Arena Pro Swim Series, followed by their home invite.

The ‘Horns took down their in-state rival #7 Texas A&M for the first time in Carol Capitani’s tenure in an impressive performance top-to-bottom.  Freshmen Joanna Evans, Quinn Carrozza, and Remedy Rule all won individual events in the process.  We’ll see them in action again this weekend against North Carolina and NC State.

Moved through their recent tri-meet with Michigan and Penn State unscathed.  The Wolverines kept it closer than expected, but Virginia’s big guns pulled through.  Leah Smith posted top times nationally in the 500 and 1000.

Well, the mission just got more challenging; Simone Manuel [officially] announced two weeks ago that she’s redshirting this season, meaning the Cardinal are going to have find ways to make up her 55-60 individual points at NCAA’s.

Their meet against Florida was long course, and the Gators aren’t a very good dual meet team this season, but Georgia put their depth on display in a dominating win. The ‘Dawgs then came back and took down in-state rival Georgia Tech, led by Hali Flickinger’s 4:41.9 in the 500 free (that’s second nationally this season).

Not much has changed since our last rankings for the Bears.  We’ll wait and see how they perform at the Minnesota Arena Pro Swim Series this weekend.

Texas A&Ms depth issues? I’d have to disagree. I guess their invite next week will prove you guys wrong