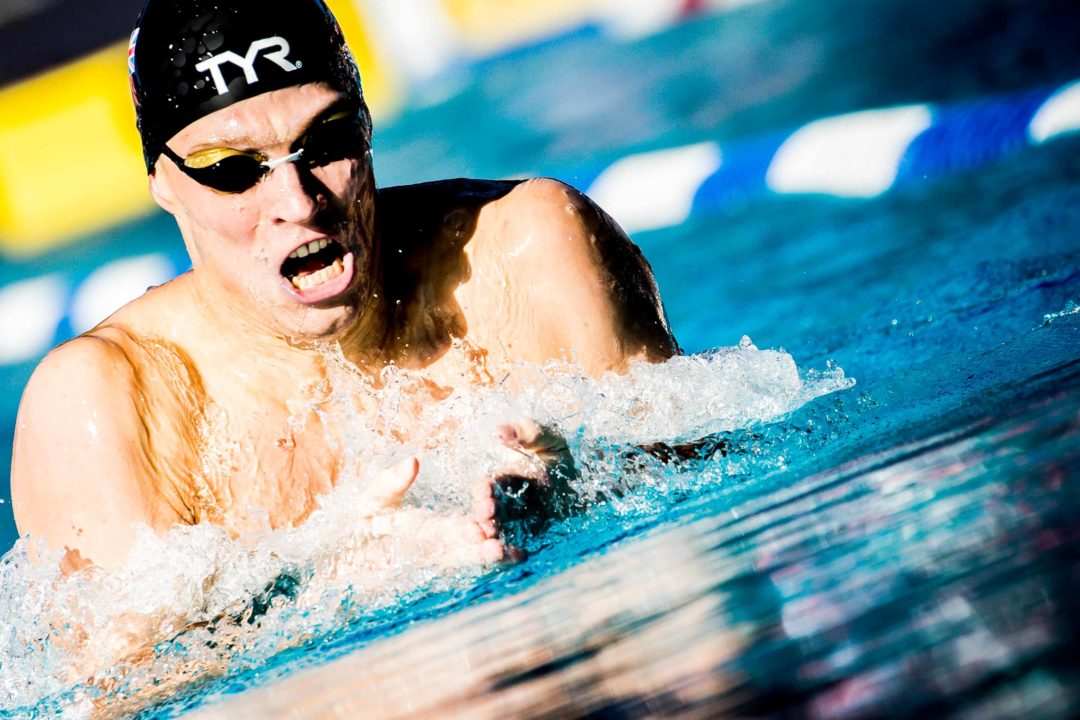 The 2019 Scottish Open Short Course Championships finished today in Edinburgh, but not before Olympian Ross Murdoch added another gold to his haul from the meet.

After already taking 50m and 100m breast gold over the first 2 days, Murdoch made it a clean sweep of the discipline, taking the 200m distance in a time of 2:03.71. That’s just off his best mark of 2:03.43 from last year, an outing which makes the University of Stirling star the 3rd fastest British performer of all-time in the event.

His Stirling teammate, Danielle Huskisson, made some magic in the women’s 1500m free, with the 26-year-old producing a winning effort of 16:08.01.

Another Stirling swimmer, Mark Szaranek, formerly of the University of Florida Gators, put up the winning 200m IM time of 1:53.54 to get the gold ahead of European Short Course Championships 400m free silver medalist Tom Dean. Dean grabbed runner-up this evening in this 2IM in 1:54.32.

Entering this meet, Szaranek’s previous personal best rested at the 1:53.77 notched at the 2016 World Short Course Championships in Windsor, Canada. As such, he sliced .23 off of that old PB to remain the 5th fastest British performer all-time.

Newcastle teenager Emily Large climbed atop the podium in the 200m fly in a time of 2:05.45, while Craig McNally doubled up on his 200m backstroke victory with a 51.50 winning effort in the 100m back tonight. That’s only .03 outside of McNally’s PB.

For Large, her outing this evening crushes her previous personal best of 2:06.60 and makes her the 4th fastest British performer all-time in the event.

Overall, the University of Stirling earned the overall club title for the meet, accumulating a point total of 1395.50.

Head Coach of the University of Stirling, Steven Tigg, said of his squad’s performances,“Really happy with how things have gone this weekend. There have been some real big steps in the right direction looking towards the Trials, and some real positive performances that I think will keep people motivated over Christmas and into the long course part of the season.

“We normally have a little bit of a rest coming into this meet, with the athletes shaved down,  and here is really about testing the skills, seeing where we are compared to previous seasons and hoping we can get a little bit of confidence going into the next part of the cycle and just having fun with it. A lot of them swim different events at these meet, ones they don’t normally compete in.”

With 2020 being an Olympic Year Tigg spoke about moving into the long course season, and said,

“We won’t change a huge amount of things but there will be a shift in focus to long course preparation. We’ll review what’s happened in this first cycle and we’ll take the elements we think have worked well and try and implement them into long course. And on the flip side we will try and learn and adjust a few things that hadn’t worked as well as we had hoped.”

Talking about the depth of squad, Tigg continued,

“This is a great squad. If you look across Europe it’s probably one of the strongest groups of swimmers you’ll collect. Myself, Brad and Josh all enjoy the privilege of getting to work with these guys. It keeps us motivated as well, it keeps us hungry, it keeps us excited about what this year and beyond can bring.

“The support from the University, Scottish Swimming, British Swimming, the sportscotland Institute is massive for us. It is a really exciting time at the University seeing the new facility being built and for a training environment in particular, I think it will be unrivalled across the UK and perhaps even further afield.”

The top ten club points were: