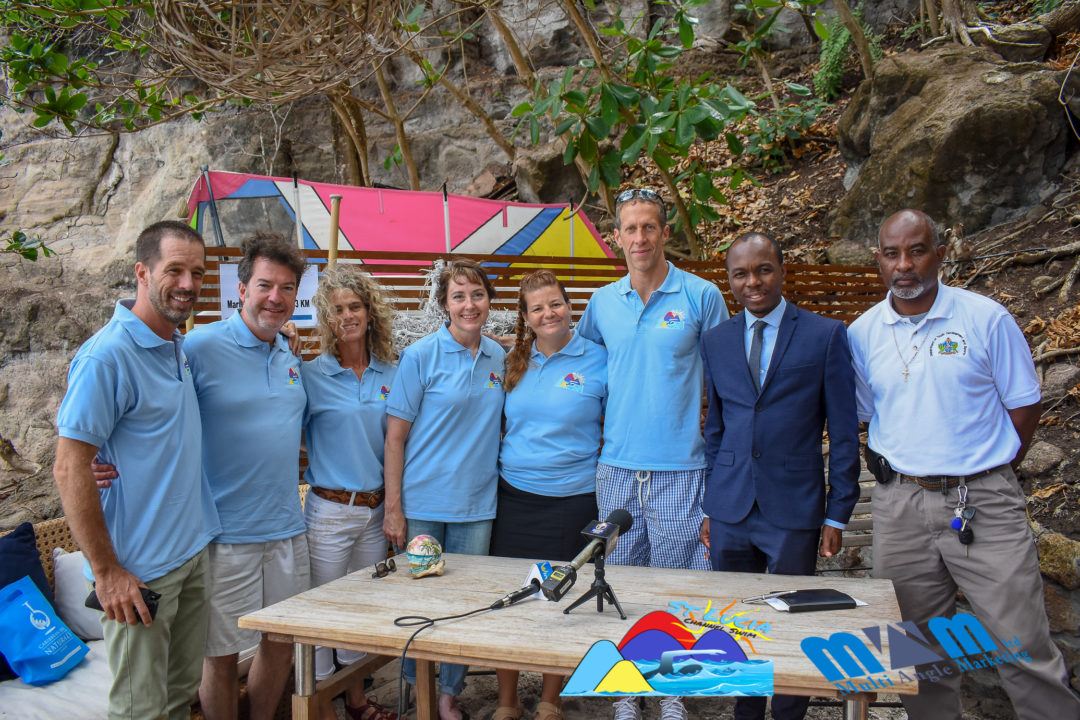 Nance, fourth from left, swam the channel in just under 14 hours in mid-May. Current photo via Sue Dyson

Before the sun rose on Wednesday, May 16, a 40’ Lewmar Catamaran named “ALL IN” pulled out of its slip at the IGY Rodney Bay Marina, in St. Lucia, carrying 11 passengers and crew on board, with an attempt to make history at stake.

On that day, 52-year-old Molly Nance, a Nebraska native, set out to be the first woman to successfully swim across the St Lucia Channel to a small beach in Saint Anne’s, Martinique. According to the Lincoln Journal Star, Nance had planned an English Channel attempt in 2014, but had to cancel due to illness.

Once the vessel reached around Pigeon Island, the boat’s captain guided Nance and her support team to Cariblue Beach at The Body Holiday resort. Nance climbed out of the boat at around 4:38 AM and swam to shore with kayaker Weston Moses accompanying. Five minutes later, Captain Martin Thomas sounded his boat’s horn and the swim began.

Nance’s support team consisted of her husband, Paul, and few others.

As the sun rose, both islands could be seen in either direction. Nance had covered about half of the channel’s distance around midday. At 6:39pm, after 13 hours 56 minutes, Nance reached a small beach just west of Anse Meunier, Martinique.

This was not the first completed swim across the stretch of approximately 21.2 miles (34 kilometers): In 1987, Jacques Sicot swam from Martinique to St Lucia in over 19 hours, after being swept in a current off-course. Sicot decided in 1988 to swim in the opposite direction, from St Lucia to Martinique, and completed that attempt in approximately 12 hours.

In attendance was Honorable Minister Dominic Fedee and Director of Sports Patrick Mathurin. There, event organizers Nathaniel Waring and Sue Dyson discussed the intricacies of Channel swimming, as well as event details how the swim ties into sports tourism.

Fedee spoke about sports tourism being a niche market that St. Lucia needs to embrace, pledging the support of the government.

The inaugural organized channel swim will be held from July 6 – 8, 2018. English Channel two- and three-way swim world record holder Philip Rush will lead the 3-day event. He is now a coach, motivational speaker, and firefighter, will conduct open water clinics on July 6th, and officiate the Channel Swim from the official’s boat on July 7th.

The clinic on the 6th will be split into two parts: one for coaches/adults in the morning, followed by a session in the afternoon for local swimmers and youth. On July 7th, early in the morning, the Channel Swim will take place. It will leave from Smugglers Cove, Cap Maison Beach.

The full-day event will be followed by an open water swim meet with 1K, 3K, and 5K distances, open to the public.

For more information regarding participation and registration for the various events, please contact Sue Dyson at sluchannelswim[at]publicist.com.

She is awesome! That’s a fantastic achievement. Wow!

Awesome Event! I highly recommend it for marathon swimmers!