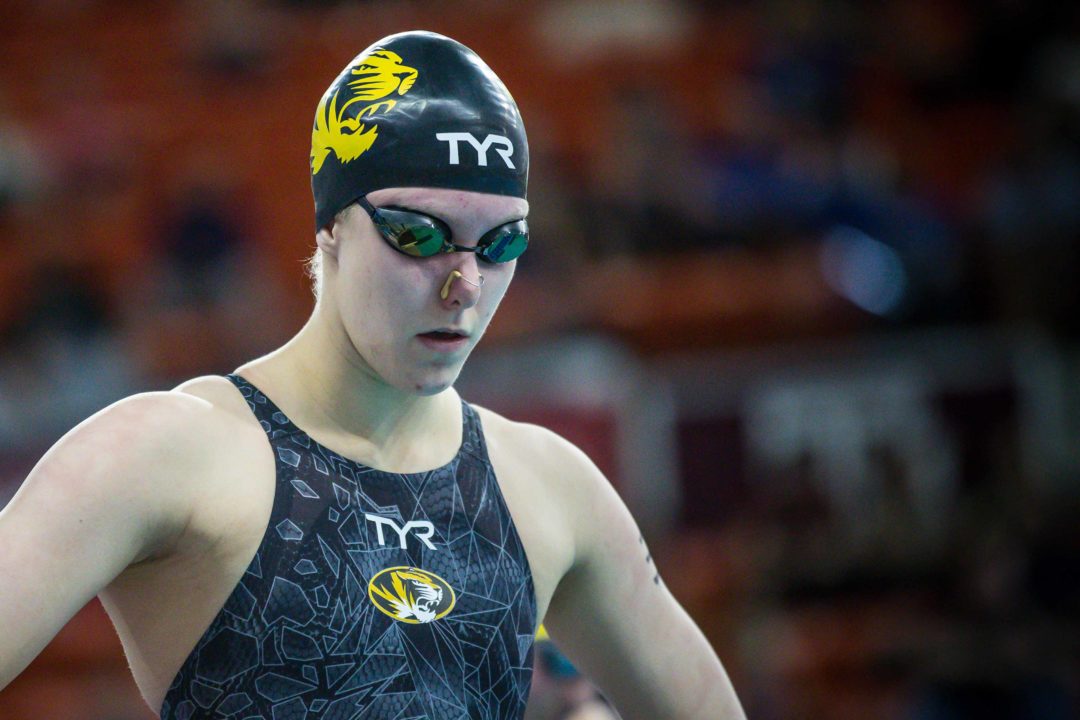 As the Mizzou women battled Arkansas, Sarah Thompson won the 100 free and 100 fly, events that were once dominated by recent Arkansas grad Anna Hopkin. Archive photo via Jack Spitser/Spitser Photography

The Mizzou men and women are now each 2-0 after the Tigers swept their women’s dual meet against Arkansas and their men’s dual meet against Missouri State on Saturday. Last month, both Mizzou programs defeated TCU at their first dual meet of the season. Additionally, Mizzou was suited up for both meets as their head coach, Andrew Grevers, has stated that the team will suit up for all meets this season.

Arkansas also just graduated star freestyler and butterflier Anna Hopkin who placed 2nd in the 50 free, 100 free, and 200 free at last year’s SEC Championships. She was a major asset for the Razorbacks on relays, where although the 400 free relay finished 10th at the SEC Championships, she anchored the relay in a time that was 2 seconds faster than the winning relay’s anchor (45.78). This is the 1st dual meet of the season for Arkansas, the 2nd for Missouri, and our first indication of whether Arkansas can sustain that speed without Hopkin.

In the sprint events, Arkansas junior Kobie Melton stepped up for the Razorbacks, dropping 1.6 seconds in a tight race with Mizzou senior Sarah Thompson in the 100 free and posting a time of 49.27. Thompson still took the win in a time of 48.80 while Melton touched the wall 2nd.

Thompson found victory again in the 100 fly where she dropped time and touched the wall at 52.65 ahead of 2nd place finisher and Mizzou sophomore Meredith Rees. Arkansas’ top finisher was freshman Anna Ervin who placed 4th (55.91).

In the 200 free, one of Hopkin’s SEC defending champion events, Arkansas sophomore Adela Vavrinova won with a time of 1:48.39, beating Mizzou senior Samantha Porter. Vavrinova also took 1st in the 200IM on Saturday, touching the wall at 2:01.09 ahead of Mizzou’s Amanda Smith. Vavrinova is a new addition to the Arkansas team, as she transferred this year after East Carolina University cut their swimming and diving team.

Later that day, Bloebaum followed her 2nd place finish in the 1000 with a victory in the 500 free (4:49.51), this time flipping the script and out touching Palsha by 2 seconds.

Rees continued that winning streak by taking 1st in the 100 back in a 52.88, adding just under a second to her best time. This swim came after the victory she helped Mizzou to in the 200 medley relay alongside junior Kayla Jones, Thompson, and junior Megan Keil (1:37.14).

The University of Missouri men took 5th place at last year’s SEC Championships while the Missouri State Bears won the Mid-American Conference (MAC) Championships for the 3rd time last year. The Bears only brought their men’s program to this dual meet.

Mizzou freshman Daniel Seabaugh kicked off the meet with a win in the 1000 free, touching the wall at 9:18.66, and beating Missouri State’s distance star Pawel Krawczyk by 3 seconds. Last year, Krawczryk won the 500 free and placed 2nd in the 200 and 1650 free at the MAC Championships.

Kovac kept the momentum going with another win in the 100 free in a time of 44.80. He touched the wall exactly 2 seconds before sophomore Jonathan Hill touched 2nd for Missouri State. Kovac’s 3rd and final event win was in the 200IM where he touched the wall at 1:46.62.

Missouri State freshman Robbie Hill broke onto the scene with a 100 back victory in a time of 48.80. He won by more than a full second, as Mizzou freshman Mikolaj Malec touched 2nd at 49.86.

Mizzou junior Jack Dahlgren touched the wall 1st in the 500 free with a time of 4:27.73, adding about 10 seconds to his best 500 free time from the 2019 NCAA Championships. Krawczyk took 2nd place again for Missouri State.

In the 200 breast, Mizzou sophomore Will Goodwin placed 1st (1:59.98) with a 3 second lead, but the Missouri State men evened the score with 2nd, 3rd, and 4th place finishes from senior Michael Hampel, freshman Jimmy Doromal, and freshman Nick Schuster.

In the last race of the day, junior Kyle Leach posted a blistering 43.73 on the anchor leg of Mizzou’s winning 400 freestyle relay. This was the fastest split in the event.

Courtesy of: University of Missouri

COLUMBIA, Mo. – The No. 17/20 Mizzou men’s and women’s swimming and diving teams both recorded victories at the Mizzou Aquatic Center on Saturday, as the women took down Arkansas, 185.5-114.5, and the Tiger men defeated Missouri State, 193-92.

“We were really looking at this meet as another opportunity to work out the kinks and set ourselves up for an incredible Mizzou Invite. We’re so excited to have Arkansas back for the Mizzou Invite, along with Kentucky on the men’s and women’s side. This was our opportunity to make sure we got the technical details coming through to prepare us to put it all together.”

The Tigers return to action on Wednesday, Nov. 18 for the Long Course Trials Qualifier at the Mizzou Aquatic Center. The teams then return to action the next day for the three-day Mizzou Invite, held Nov. 19-21 at the Mizzou Aquatic Center. Each day swimming preliminaries will commence at 9 a.m. with swimming finals set for 6 p.m. Diving preliminaries and finals will go back-to-back in the afternoon between swimming sessions.

Courtesy of the University of Arkansas

COLUMBIA, Mo.- The Razorback swim and dive team dropped their season opener to the Missouri Tigers on Saturday by a score of 185.5-114.5 inside the Mizzou Aquatic Center.

The Razorbacks had seven winners on the day. Peyton Palsha won the 1000-yard freestyle with a time of 9:54.23.  Adela Vavrinova secured a win in the 200-yard freestyle with a time of 1:48.39. Vanessa Herrmann earned a victory in the 100-yard breaststroke with a time of 1:00.78. Brooke Schultz locked up the 1-meter dive with a final score of 336.30.  Vanessa Herrmann won her second event of the day in the 200-yard breaststroke with a score of 2:12.58. Brooke Schultz also won two events, with a win in the 3-meter dive and a final score of 345.60. Adela Vavrinova pulled in the Razorbacks’ final win for the day with a 201.09 time in the 200-yard individual medley.

“I am proud of our team,” said Arkansas head swim and dive coach Neil Harper. “This is our first meet of the year and we didn’t back down to a Top-20 SEC opponent on the road.”

“Of the 14 individual events we won seven of them and that’s a credit to our leaders stepping up,” said Harper. “I was particularly impressed with Brooke, Vanessa, Peyton and Adéla who between them earned all the Razorback wins today. I also thought Kobie swam great in the 100-back,100-free and relays.”

“Brooke and Maha scored NCAA Zone qualifying scores in both the 3-meter and 1-meter springboard events and Vanessa’s wins were also NCAA B qualifying times.”

“I think our freshmen made a great account of themselves in their collegiate debuts as Razorbacks,” Harper said. “Abby Pfeifer, Serena Gould, Hannah Cech and Bella Cothern all had great showings today. We learned a lot about our performances under pressure and can make some adjustments and improvements for our future meets.”

The U.S. Open will be up next for the Razorbacks on Thursday (Nov. 12), more details about the open will be available closer to the date of competition.

“I’m so thankful we had the opportunity to get back to competition today,” Missouri State head coach Dave Collins said. “It’s been a long eight months without racing so today was a great day. Watching the freshmen in their first college races was a highlight. We have felt very good about this group since they signed and today we saw some things out of them to really get excited about.”

The meet was highlighted by a first-place finish for freshman Robert Hill in the 100-yard backstroke. Hill recorded a time of 48.80 (25.30) to secure the first-place spot.

“It’s great to get out there at the college level and see the work that the team has been putting in pay off,” Hill said.

Jacob Bening, Austin Huskey and Evan Porter also took the second-fourth place spots in the 200-yard backstroke. Bening recorded a time of 1:50.24, Huskey finished shortly after with a time of 1:50.99 and Porter finished with a 1:57.12.

The 200-yard breaststroke consisted of second-fourth place finishes for Hampel, James Doromal and Nich Schuster. Hampel swam a 2:02.83, Doromal recorded a 2:05.60 and Schuster finished at 2:09.50.

Hill, James Vaughn and Tyler Lewis finished second through fourth place in the 100-yard butterfly. Hill finished at 49.97, Vaughn finished right behind Hill with a 49.99 and Lewis swam a 50.53.

No personal record marks were broken. The Bears move into the offseason and will prepare for more competition in the spring semester.

Why is swimming the only sport where wearing competition attire (equipment?) Is frowned upon in non championship events?

I’ve never head a track runner say they are wearing trainers at a duel meet instead of spikes because it’s not important.

Because the tech suit makes a HUGE difference

Both teams were suited