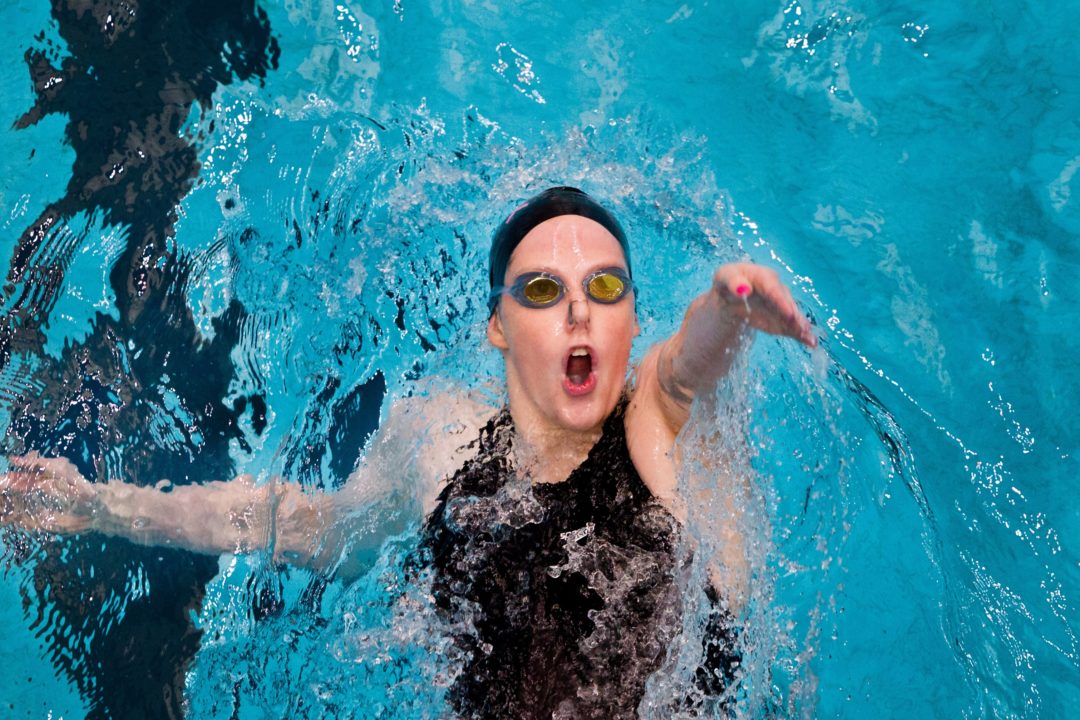 Missy Franklin’s final season of high school swimming is all about “team.” Despite winning 4 Olympic gold medals and being the best high school swimmer in the country (and one of the best swimmers in the world), she came back for her senior year to be a part of a team, and that began last night as she kicked-off her final season against Highlands Ranch.

For anyone unfamiliar with the high school schedule in the United States, the final three of those events were swum in rapid succession. Note that the boys’ and girls’ high school seasons are separate, so there were no extra heats as Franklin hopped straight from the 500 free to the 200 free relay, then with two events off back into the 400 free relay.

Other good swims for Regis Jesuit include sophomore Taylor Wilson, who put up a 55.69 to win the 100 free – clearing the state qualifying mark in pretty heavy training. Among the top performers for Highlands Ranch is Gabrielle Liedy, who won the 200 free in 2:01.59.

e crowds came out as they always do for Franklin, who has become an idol to throngs of young swim fans. Estimates put between 250-300 fans at the meet, which is huge for a high school dual.

Regis Jesuit will be back at home next Tuesday as they take on their huge rivals from Cherry Creek at 4:30. This meet has an intense history that was forged in fire in Franklin’s sophomore season in 2011. There, Regis knocked off Cherry Creek at the 5A State Championship meet to break a streak of 6-straight state titles. At that meet, expect two different events from Franklin (if we had to guess, the 100 back and the 200 free will be coming up) to get two more state-meet qualifying times.

I don’t know much about the scoring system but that seems like a HUGE margin, yeah? RJ showed the you-know-what up.

It is a huge margin. Working to get full results so we can share some other good swims too…

I always thought high school dual meet scoring was pretty standard, but that certainly could be an incorrect assumption on my part. Regardless, I’ve always seen the following scoring:

Fluff piece on NBC’s “Today” show, with video. She looks like she had fun, cheering and yelling with her teammates! Great perspective on her part: she’s climbed the mountaintop, and she’s showing her teammates that she values being with them and taking a few events for the team. “Just one of the girls.” In terms of her swimming the IM and the 500 free: what does she have to lose? She has FOUR Olympic Gold Medals. She should value this time, recharge emotionally, and don’t rush the 4-year process (or even the WC process for next year and ’15).

4 high school cut-times for an Olympic gold medalist!! Wow, fire up the presses and call security.