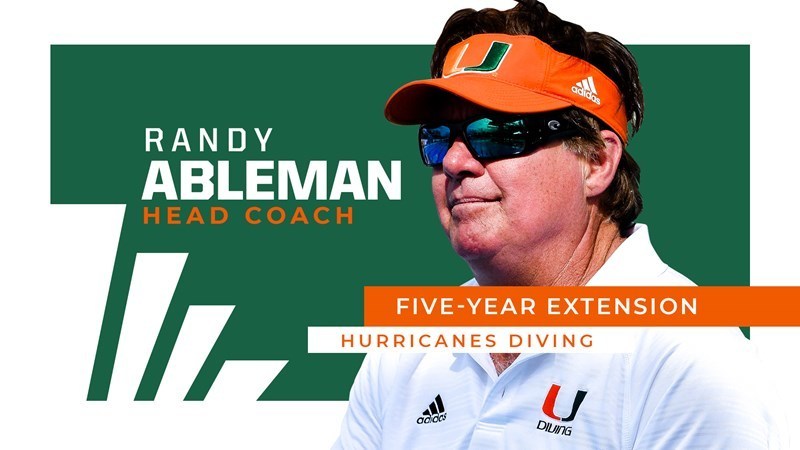 The University of Miami has announced that 2018 ACC Women’s Diving Coach of the Year Randy Ableman has been given... Current photo via Miami Athletics

The University of Miami has announced that 2018 ACC Women’s Diving Coach of the Year Randy Ableman has been given a 5-year contract extension. Currently in his 30th year as the program’s head diving coach, the contract will run through the 2022-2023 season.

“For the past 30 years, Coach Ableman has built and sustained our diving program at a championship level,” athletics director Blake James said. “The men and women in his program are champions on the diving boards, in the classroom and in life. We are excited that he and his wife, Karen, will continue to make Miami their home and remain a part of the Hurricanes Family.”

Ableman is the head coach of both the women’s and men’s diving teams; the men’s program has no accompanying swimming team.

In 30 years, Ableman has coached 12 national champions to 23 individual national titles: more than any coach in NCAA history. The most recent was David Dinsmore, who won the 10-meter platform event at the 2017 NCAA Championships as a freshman. The platform specialist placed 4th in 2018 as a sophomore in the same event.

Full release, courtesy University of Miami, is below:

The contract will keep Ableman, who was named the 2018 ACC Women’s Diving Coach of the Year and is in his 30th year as head coach, at the helm of the program through the 2022-2023 season.

“For the past 30 years, Coach Ableman has built and sustained our diving program at a championship level. The men and women in his program are champions on the diving boards, in the classroom and in life,” James said. “We are excited that he and his wife, Karen, will continue to make Miami their home and remain a part of the Hurricanes Family.”

In his illustrious career as head coach, Ableman has guided 12 national champions to an NCAA-record 23 individual national titles – the most recent being David Dinsmore, who captured the 10-meter platform title in March 2017.

“I’m very thankful. I really can’t say enough about the University of Miami administration. Not just Blake James, but Josh Boone, who is a great sports administrator,” Ableman said. “I’m going to do everything I can do to make it my best five years in every way – from a results standpoint, to how our kids perform on the boards, to how they do in the classroom and making sure I help prepare them for life after graduation.”

In one of his most recent triumphs as head coach, Ableman coached then-senior Sam Dorman to a record-breaking performance in the 3-meter springboard event at the 2015 NCAA Swimming & Diving Championships. Dorman’s score of 529.10 was the highest total in NCAA history for the six-dive version of the event, which earned him the first national championship by a Miami men’s diver since Reuben Ross in 2008.

“Randy puts all his athletes first, and that’s how it always has been with him. That’s what makes him so special,” Dorman said. “His number one priority is his athletes. He doesn’t treat us like athletes, he treats us like family. More than just diving, Randy teaches us about life.”

“There really is a lot of pressure, because we have some great kids and it’s my job to make sure that I get them to their potential – in a couple of cases, that means being the best in the world,” Ableman said. “That’s what drives me. I do it for these kids because it’s a big responsibility. It’s up to me to make sure I guide them to not only be best in their sport, but to turn into great young people ready to go out and do special things in the world after they’re done competing.”

Ableman is married to the former Karen Gorham, who was the 1980 U.S. indoor champion in the 1-meter springboard.

“First of all, this was a dream job for me. I came down here to dive when I was 15 years old, and I couldn’t believe how beautiful it was,” Ableman said. “To get the opportunity to coach here, I feel like I’ve lived a charmed life. Obviously, the program was great before I got here but we’ve had a lot of success, I can’t believe it’s 30 years. It has gone so fast. It’s unbelievable.”

Congratulations, Randy! This is well-deserved.

Once upon a time, long, long ago, the University of Miami has a very good men’s swimming and diving team. Now, it’s just diving….