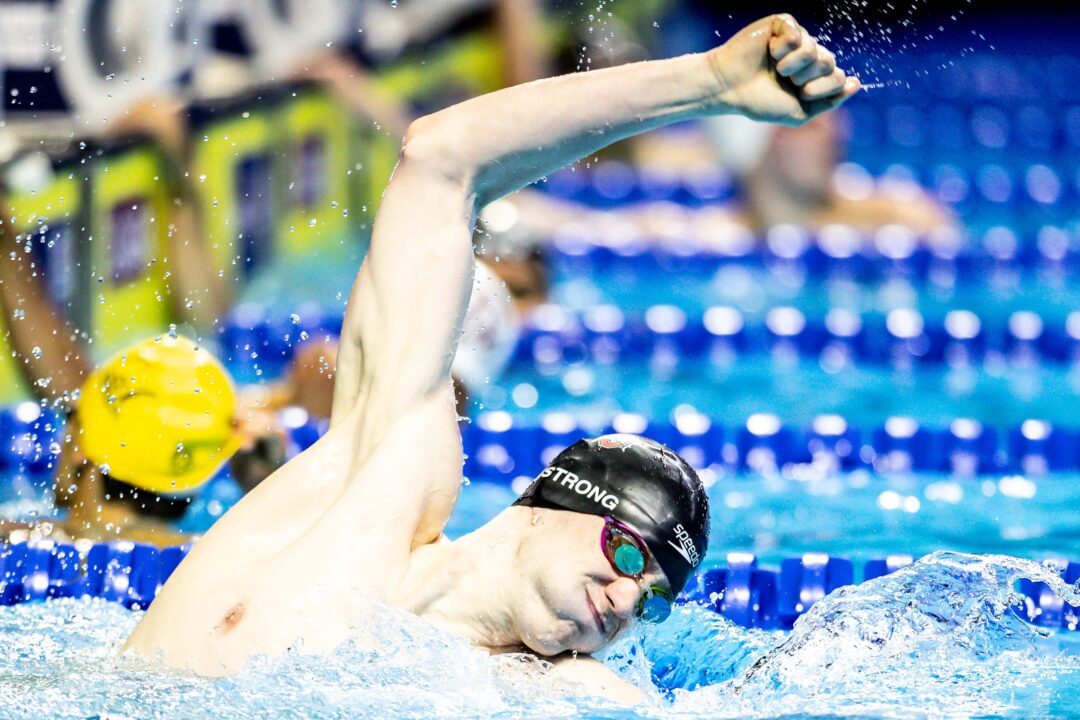 After adding the 800 free relay to his lineup on night one, Ohio State's Hunter Armstrong has scratched the 50 free, hinting at him swimming five relays. Current photo via Jack Spitser/Spitser Photography

Following the first night of competition at the Division I men’s NCAAs, we are starting to see a glimpse of team strategy for the meet with the heat sheets posted for the Thursday morning session. There were six total scratches for the morning session, and all six swimmers competed on both of their school’s relays this evening, indicating that swimming all five relays may be in the cards.

The most notable scratches come in the 50 free, with Ohio State’s Hunter Armstrong, Harvard’s Dean Farris and Stanford’s Andrei Minakov opting out of the splash and dash. Both swimmers were seeded to score individually, as Armstrong came is as the 10th seed with an 18.93 and Minakov came in as the 14th seed in 19.06. This now frees up both swimmers to compete on all five of their respective school’s relays.

With Minakov, there was a hint that Stanford head coach Dan Schemmel would be leaning this direction before the Thursday prelim heat sheets came out. After swimming on both medley relays and the 200 and 400 free relay at Pac 12s, Minakov made a surprise appearance on the leadoff leg of the Cardinal 800 free relay after swimming the fly leg on their 200 medley relay. The gamble paid off for Stanford, as Minakov posted a strong 1:31.49 leadoff to help Stanford drop nearly 2 seconds from their seed and secure a third place finish.

Armstrong also competed on both of Ohio State’s relays tonight. On the 200 medley relay. Armstrong seemingly had a bad turn and led off in 21.29, well off of his Big 10s split. He later returned to redeem himself on the Buckeye 800 free relay, posting the team’s fastest split with a 1:32.18 second leg. Similar to Minakov, the 800 free relay was a new event for the Olympian as he opted to skip the relay at Big 10s last month.

Farris had a huge night for the Crimson, leading off their 200 medley relay in 20.36, one of the fastest 50 back splits in history. He then returned to swim second on Harvard’s 800 free relay, splitting a field-leading 1:29.85. After dropping the 50, it now seems likely that Farris will focus his attention on carrying all five of Harvard’s relays into scoring position.

Virginia Tech senior Antani Ivanov, who came in as the 23rd seed in the 500, has scratched. Ivanov competed on both of the Hokie relays this evening, splitting a 20.05 in the fly leg of their medley relay and a 1:32.56 on their 800 free relay. Ivanov opted to skip the 200 free relay at ACCs, though may be in play for a spot this week. Virginia Tech’s slowest leg at ACCs was a 19.36 from Luis Dominguez Calonge.

The 200 IM also saw a pair of scratches. Alabama junior Derek Maas, who came in as the 18th seed, scratched, as did Texas A&M’s Koko Bratanov, who was the 20th seed. The 800 free relay was an addition to Maas’ event list from SEC’s, where he opted for both 200 and 400 yard relays, so swimming five relays this weekend now seems likely. Similarly, Bratanov was not a member of A&M’s 200 medley relay at SECs, but anchored the Aggies in 18.87 this evening, also hinting that swimming five relays is likely for the senior.

we have people who go 18.8 in the 50 scratching the event now… sheesh

honestly I’d love to see what training while in military service does to him he might make some sort of comeback and reorganize himself overtime. That 52.09 last week is faster than what he was gone in the last 2 seasons.

yes he was allowed to continue training during his military service albeit not as much as he did which could actually end up help him. He could have been overtraining for past few years and that might have been affecting him.

Sweet, more room for Texas to score in the 50 🙂

I know everyone wanted to hear that