Mendolicchio Repeats as Mountain West Swimmer of the Week 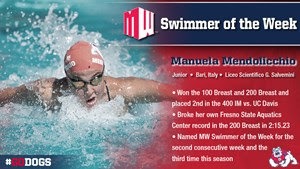 For the second consecutive week and third time this season Fresno State junior Manuela Mendolicchio has been named MW Swimmer of the Week. Current photo via Fresno State Athletics

COLORADO SPRINGS, Colo. – For the second consecutive week and third time this season Fresno State junior Manuela Mendolicchio has been named MW Swimmer of the Week.

Mendolicchio is the only MW swimmer to win the weekly honor three times this season. She earned wins in both the 100 and 200 Breast and placed second in the 400 IM as the ‘Dogs were narrowly defeated by UC Davis on Saturday.

The junior from Bari, Italy broke her own Fresno State Aquatics Center record in the 200 Breast in 2:15.23, 1/100th of a second better than her previous record time. She won the 200 Breast by nearly five seconds and won the 100 Breast by more than half a second, winning both events for the second consecutive meet.

She also swam the 400 IM for the first time in her Bulldog career and placed second in a field of 13 to keep Fresno State’s chances of winning the meet alive into the final relay. To start the meet, Mendolicchio swam the second leg in Fresno State’s 200 Medley Relay team that placed second but was just 1/100th of a second behind the winning team from UC Davis.