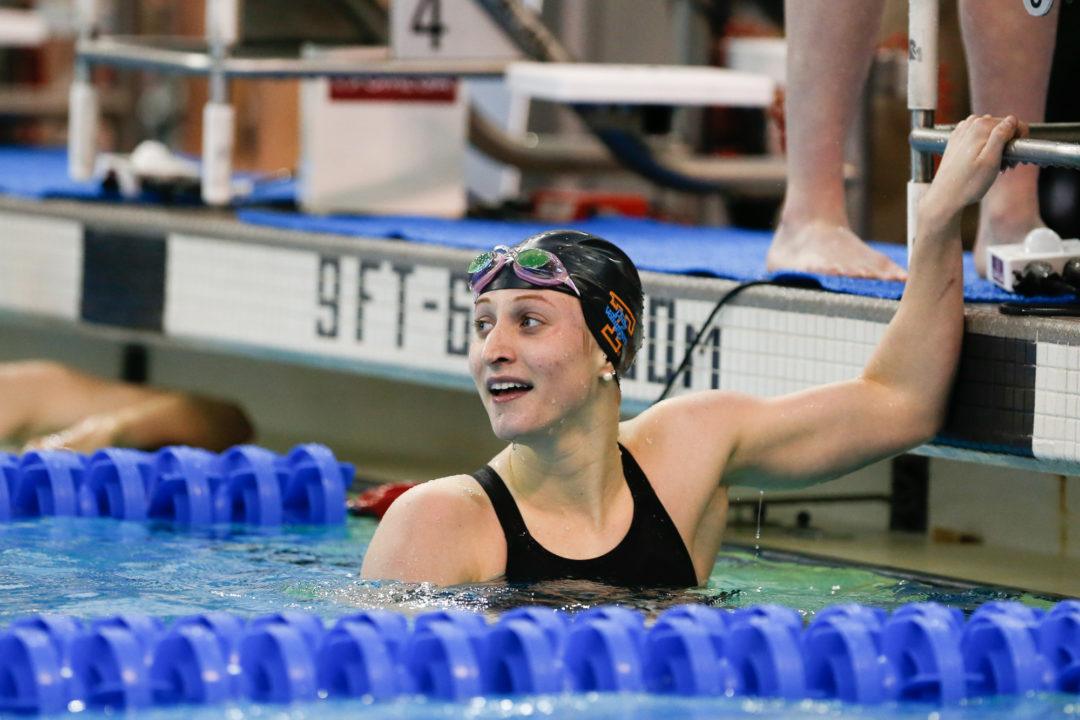 As Tennessee continues to surge at the SEC Championships, their women are also continuing to defy conventional wisdom when it comes to breaststroke pullouts. A day after Nikol Popov skipped her second pullout on the breaststroke leg of the 200 medley relay, fellow Vol Meghan Small passed up both breaststroke pullouts in the 200 IM, going on to win the event and set a new SEC meet record. Archive photo via Tim Binning/TheSwimPictures.com

As Tennessee continues to surge at the SEC Championships, their women are also continuing to defy conventional wisdom when it comes to breaststroke pullouts. A day after Nikol Popov skipped her second pullout on the breaststroke leg of the 200 medley relay, fellow Vol Meghan Small passed up both breaststroke pullouts in the 200 IM, going on to win the event and set a new SEC meet record.

Race video clearly shows Small (in the white cap, fourth from the bottom in the video below) skipping the breaststroke pullouts, and, shockingly, swimming away from Texas A&M’s Sydney Pickrem, the conference’s best 200 breaststroker:

(Skip to about :58 in the video if it starts from the beginning)

Small appears to do only a big, powerful dolphin kick off of each wall, with no arm pull or breaststroke kick before she breaks the surface. The emergent strategy would conceivably give up the power of the arm pull-down, but also gets rid of the dreaded ‘dead spot’ in a breaststroke pullout – when the arms are recovering back over one’s head and momentum stops almost entirely before the breaststroke kick.

Pickrem has won the last two SEC titles in the 200 breaststroke, so it’s hard to argue that her pullouts are making Small’s strategy look better than it really is. Though Pickrem ultimately outsplits Small 32.0 to 32.5, Small ultimately betters her own split from SECs last year (33.0) by a fair margin. And visually, she clearly swims away from Pickrem early in the leg, as Pickrem is underwater and Small already on the surface swimming.

This isn’t an entirely new trend for Tennessee. Volunteer alum Molly Hannis made the 2016 U.S. Olympic team in the 200 breast by skipping her final pullout at U.S. Olympic Trials. Hannis was 4th at the 150 wall, but had the field’s best final split (by half a second, no less) to pass up Bethany Galat and Micah Sumrall for the Olympic spot. We interviewed Hannis and her coach, Bret Lundgaard, about the strategic decision, and you can read their 2016 commentary here.

That is totally irrelevant to the topic at hand.

Lochte was well under Phelps’ supersuited WR pace at the 300m… He had no one to race and died, hard. Meanwhile, Ye Shiwen’s strategy was the exact opposite. Yuya Horihata, in the same final, split 27.8 on the last 50– 1.3s faster than Lochte– and went over 8 seconds slower than Lochte overall (4:13). That’s how hard Lochte died. Yes, it was an extraordinary last 50 from Ye Shiwen, but no more suspicious than any of the other extraordinary things that happen in swimming (Dressel’s fly in 2017, Katie Ledecky making men’s Olympic Trials cuts and beating other world class women by body lengths, Michael Phelps’ entire career). When she tests positive, I won’t defend her. You won’t find a… Read more »

Really interesting… I guess the fastest moment of the pullout is the momentum from the dolphin kick, so you’re riding that momentum (plus maybe saving a little oxygen debt). Downside is resistance from losing the streamline, right? fwiw, you can see why Pickrem is the dominant LC IM’er of the NCAA, she’s killing Small over the water.

Pickrem also killed her on the pullouts

As this article hints, that’s debatable. There seems to be a trade-off. Pickrem went farther on pullouts, but also looks to be going slower and loses ground over the subsequent few meters (until her over-the-water advantage kicks in). If a closer video analysis showed that’s true, we’d ask: is it worth the trade-off?

she seems to catch up on the second pullout though.

Pullouts are not like other under waters. Your not building or maintaining speed off the wall so when you do not do the pullout you break the surface with more momentum. Smart thinking. Probably takes more energy.