Nikol Popov Only Did 1 Underwater Pullout on 200 Medley Breaststroke 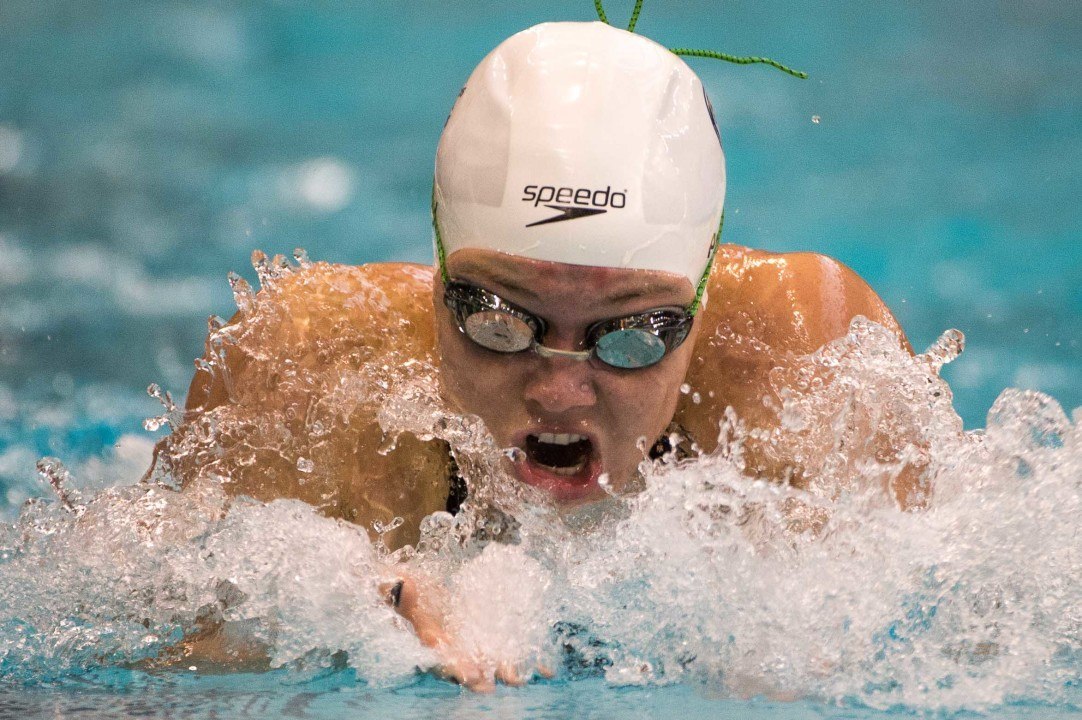 Tennessee swimmer Nikol Popov only did 1 underwater pullout off 2 breaststroke walls in the team’s winning, and SEC Meet Record, 200 medley relay on Tuesday to open the SEC Championships. The sophomore, from Santa Clarita, California, is the Volunteers’ top breaststroker this season and split 26.68 on her leg of the relay – the 2nd-fastest of the field. Only Texas A&M junior Anna Belousova (26.33) was faster on that leg of the relay, and Popov was 1.3 seconds better than Kayla Jones, the breaststroker on Missouri’s 2nd-place relay.

Popov swam her split without a pullout: considered by most swimmers to be among the fastest part of a breaststroke swim.

Instead, Popov did a full pullout off the start, but then off the turn did just a dolphin kick and then quickly surfaced.

There’s a better video on the SEC Network replay here for those with a login, but it can also be made out (sort of) in this video from Georgia swimming on YouTube, which is focused on the Georgia 200 medley relay. Popov can be seen at the very top of the screen in the white cap (4th from the bottom) at about the 1:55 mark. She’s taken 3 strokes before the rest of her competitors finish their pullouts.

On the WatchESPN replay, the fastest heat of the 200 medley relay begins at about the 47 minute mark, if you want a better view, here.

She’s not the first swimmer to experiment with this tactic, In fact, she’s not even the first Tennessee breaststroke to experiment with this tactic. Molly Hannis, a US National Teamer and member of the 2016 U.S. Olympic Team, skipped the underwater pullout on the final length of her 200 breaststroke at the Olympic Trials. Her last 50 split, without a pullout, was 36.1. Tennessee has also tested other unique underwater tactics, including the top-arm breakout in backstroke. Their backstroker, Meghan Small, appeared to use the top-arm breakout in moderation on the start, but not the turn, on Tuesday.

Popov also had a notably-higher stroke rate on the breaststroke than any of her competitors as well.

With Hannis, the trick was skipping the pullout on the last turn. This will be something to keep a eye on for Wednesday’s 200 IM, Friday’s 100 breast, and Saturday’s 200 breast to see how she approaches those underwaters.

I could *maybe* see that being a good oxygen debt strategy on the last 25 of the 200. I just can’t figure how that is more effective on the 50 unless your pullout is just not that good.

Of course, I don’t understand the top hand breakout on the backstroke either. There were some guys at Masters Nationals last year doing that and it just didn’t seem to help.

Another instance where it may make sense from an oxygen debt standpoint.

I have to say, if you watch the race, it seemed very effective. It is probably not be breath control motivated. I think when a stroke is so power and tempo driven, it takes a few cycles to build to top end speed. By skipping the pullout she may be building to more top end speed earlier in the length.

Andrew Mering had a theory that the use makes sense when in anaerobic phase but not aerobic. That would hit the last 50 of a 200 LCM, last 25 of a SCY breaststroke, but explain why Popov did 2 pullouts on the 200 IM. Except, always off the start.

I’m not an expert on anaerobic vs. aerobic, but it makes sense to me. Coleman is going to try and catch Kredich or Nikol or Boomer to ask about it this week.

There is one (not two) breast stroke wall in the 200 MR when swimming SCY, right?

This seems like last year’s flip turn in fly.

I like that Tennessee does weird things like this. They seem to be experimenting a lot with different techniques and tactics. I am sure some of them will not work out, but this is how the sport gets pushed forward and gets faster.