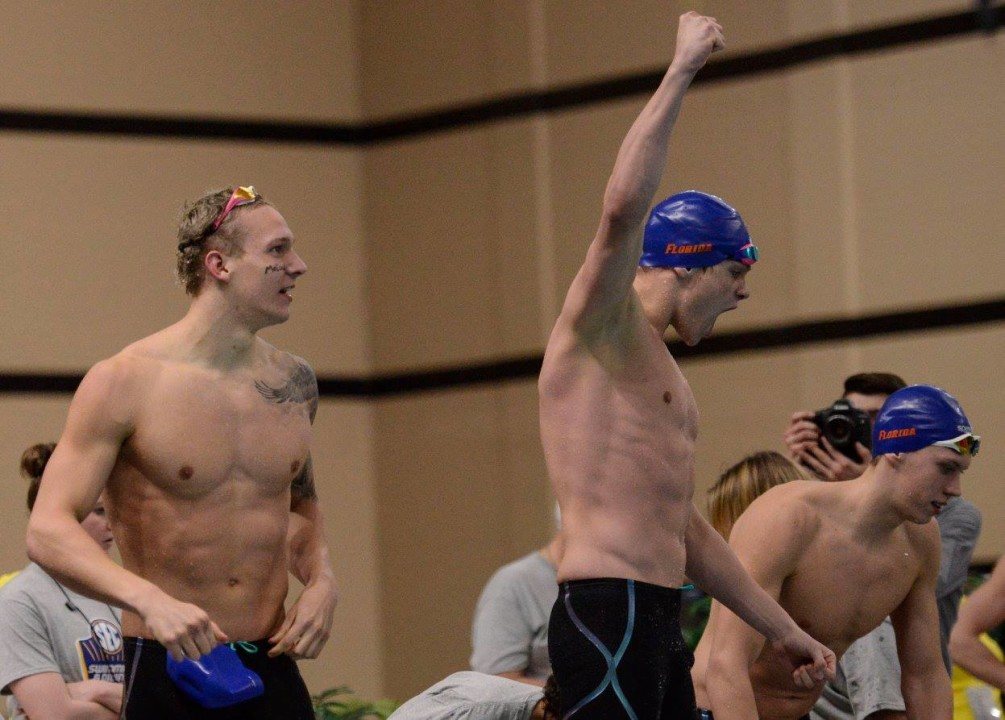 This is the second half of our “elite” program relay analysis, focused on men’s programs.  For the women’s article–where our methodology and the description below were derived from–click here.

There are many metrics by which to determine the elite programs in the NCAA. Which you choose to acknowledge probably depends in part on your philosophy, and sometimes perhaps also on which definition best propels your particular rooting interest into the top tier of teams.

In college football, the “elite” programs can be defined by conference champions and “New Year’s 6” bowl teams (formerly BCS teams). In college basketball, that line can be cut first at NCAA tournament qualifiers, and then again at teams that advance to the Sweet 16.

As was debated internally at SwimSwam and in the comments section of last week’s women’s analysis, drawing the line on “elite” ([insert your favorite Joe Flacco meme here]) programs is more difficult in swimming; the importance of conference championship meets varies greatly by team, and the major conferences vary widely in both quality and quantity of swimmers (particularly on the men’s side).

Two of the the most basic measurements mentioned last week were NCAA team standings and the number of individual swimmers qualified.  However, team scores can be skewed by a disqualification, an influx of divers, or a run of illness, given its basis on a single meet.  The number of individual swimmers qualified is perhaps a better predictive measure, but it’s not always clear where to draw the lines.

We’ve come up with one more measure for eliteness in NCAA programs, and one that, while still possessing some weaknesses, winds up capturing some of that which is missing in other measures. Specifically, we feel that examining the qualifying of NCAA relays shows depth of a team, leaves obvious delineations, and with the number of last chance and time trial swims available, also helps control for disqualifications at mid-season taper meets or conference championship meets.

After this year’s NCAA Championship meets, we’ll combine these three measures, along with any others that we think are worthy, to come up with an overall final power rankings for the season. While the final NCAA championship scoring will be the one that goes into the record books, we hope that our final stat-based power ranking can help smooth-out the data to try and eliminate outlier data or anomalies to give a better view of the overall NCAA season.

Teams in this category qualified all five of their relays for the NCAA under the NCAA Automatic Qualifying Standard. These teams took no shortcuts on depth or provisional entries, and even without having to, were still good enough to earn automatic entries to NCAAs for all five relays.

Seven teams fall into this category (versus twelve on the women’s side) for the 2016 Men’s NCAA Championships.  While there are some blue-bloods on the list (Texas, Florida, Michigan, Auburn), a few “traditional” powers are missing with non-traditional schools (Missouri, Indiana, NC State) qualifying instead:

GIVE THEM A LANE

There are nine more teams who also qualified five NCAA relays, but didn’t qualify them all with automatic entry times.  Four of those schools hit four automatic relay standards, while the other five hit either two or three.  Despite missing the automatic standards, these teams have a lane and a chance to score in all five relays.

Three schools at very different ends of the spectrum fall into this bucket: Georgia (looking to maintain their recent men’s team successes at NCAA’s), Arizona State (one of the most improved teams nationally), and Minnesota (coming back from the dead after not scoring a single swimming point last March in Iowa City).  The Bulldogs hit three automatic standards, while the Sun Devils and Gophers only hit one each.

Again, three programs fall into this next bucket, with all three looking to break through to the next level..  Princeton is coming off another Ivy League championship and looking to make up for last year’s NCAA goose egg.  Notre Dame is building off potentially the best recruiting class in school history, and has the pieces to move up in the pack in the ACC.  Wisconsin has had a couple individual seasons of note over the past 6-8 years (most notably 2013 with Michael Weiss and Drew teDuits), but is striving to have more staying power.

Like on the women’s side, the key for teams in this category is to make a leap in future seasons – stagnation at the 3 relays level can be an indication of not being able to turn existing success into future recruiting success, and also without being able to train the depth to jump to the higher levels.

Three more teams in this category, with the same conference breakdown as our last group.  Duke has shown some bright spots over the past few seasons in the early months, but is still looking to break through.  Harvard brought in a top recruiting class that came within 40 points of taking down Princeton at Ivies.  Iowa has slowly improved over the past few seasons with their new facility.

Three teams round out our final category, none of which hit an automatic qualifying relay standard: Penn (a very young, very talented Ivy team), South Carolina (best known for their distance group), and Virginia Tech (has slipped from their ACC throne two years ago)

Why don’t you rank on how many qualified, then how they are seeded in the meet? So NC State would be #1 because they have 5 automatically qualified and 4 ranked #1. And so on….

I agree. I thinks that this article doesnt show the full dominince that is shown by NC State relay power. Any normal person would think measure each team based on teams relay NC State would definitly be for sure number 1 without a doubt.

And if they didn’t blow their load at ACCs.

At NCAAs, NC State dropped a bit of time from their ACCs performance last year. I would expect the same this year with added depth

The problem is that that doesn’t take into account how much teams rest for / put into conferences. Heck, Cal didn’t even bring three of their fastest swimmers to Pac-12’s

I would think results at ncaa’s would be more indicative than seed. Sure, some relays dq, but I would consider the teams that get in the top 8 in all 5, or at least score in all 5, to be the powerhouses. Some of those teams that got there 5th relay in on a provisional time will get more points out of relays than teams that got all 5 in automatically.

Good article, but I wouldn’t expect another piece specifically about relay’s after the results are in. I agree that with “Better Rankings” that the seeding would have made the rankings more meaningful.

I would expect another piece about teams who WIN few events, but have the depth of Ups/Downs to take home the title… Question, has any team ever won a NC without a relay title in ANY relay?