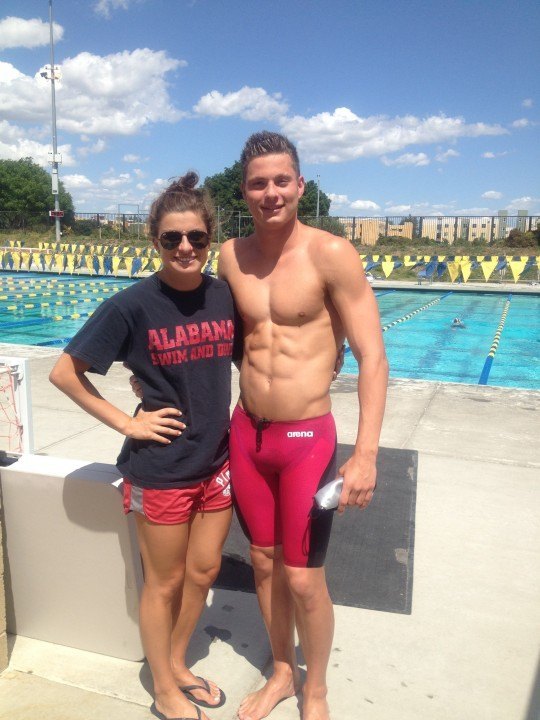 Matthew Klotz of the Sierra Marlins has broken his second Deaf Swimming World Record of the week at the 2014 U.S. Junior Nationals.

The latest mark came in prelims of the boys’ 100 meter long course backstroke, where Klotz swam a 57.88 for 22nd place overall. That will be enough for him to get a swim in the C-Final, unlike the 200 record earlier in the meet which wasn’t in the top 24.

The 18-year old Klotz is hungry for more, too.

Klotz split a 27.69 going out, which is comparable to those times at the bottom end of the A-Final. Coming home, however, he hit a lane rope which cost him a lot of his closing speed. He was the highest finisher in prelims to split slower than 30 seconds on the second 50 meters.

“It was a great first 50,” the Deaflympics Champion said. “I am looking forward to coming back tonight and staying away from the lane line that last lap.”

The old record of 58.31 was done in June of this year at the Santa Clara Grand Prix, and this is his 4th time breaking the record in the last year.

If you think about it not being able to hear is a major impairment…..how else will you hear the start…,

Message to Ben, contributing comment to another!
World Record by Matt Klotz. …
Public knowledge, not actively acknowledged: Deaf students and Deaf athletes face challenges from the day they are born. The ‘Otherabled’ Deaf are misunderstood in preschool, elementary, middle and HS by children, parents, coaches, and teachers without D&HH training and knowledge. We have all seen it, most if not all Deaf are relegated to those side tables in the lunch room or in the class room, taken out of class, left out of academic and gym teams or participation in any athletic or academic group of students or athletes because people cannot find the patience or training to work side by side them, communicate with them,… Read more »

I’m asking this only because I’m curious and not to be rude.. but swimming is a sport in which being deaf would not cause any sort of impairment whatsoever… why do they keep records?

Ben, in the water there are no physical differences between hearing and deaf swimmers, it’s everything before they hit the water that makes them special. I am the father of an accomplished 11 year old deaf swimmer and can tell you that the obstacles he faces are extreme! Imagine not being able to hear your coach in practice. You can read lips, but your coach turns her head as she talks to kids in other lanes, so you only get bits and pieces of the instruction. Good coaches come up with tools to communicate with their deaf swimmers, but there are many things lost in the process, especially the emotion. So, deaf swimmers are at a major disadvantage, before they… Read more »

Good to know and good luck to your swimmer. Thanks