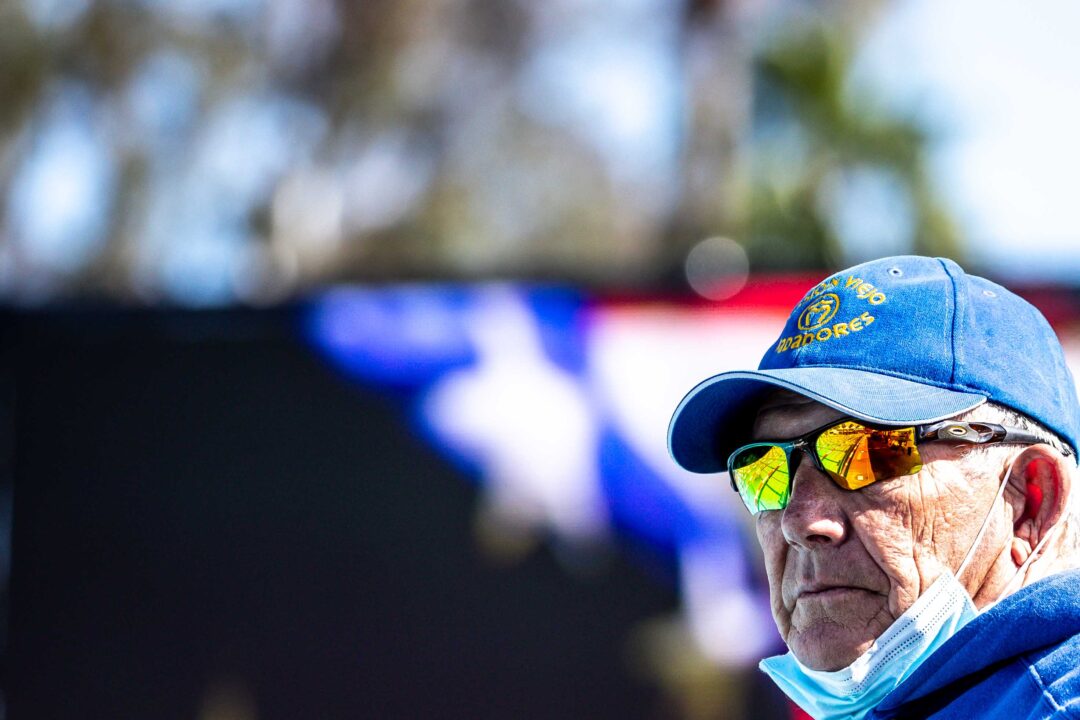 8-time Olympic swimming coach Mark Schubert is taking a temporary leave of absence from The Swim Team (TST), his new Southern California “elite training group.” His absence is expected to last for 6 months, during which time he will take a position in China.

Schubert launched the squad last year in connection with Saddleback El Toro Swim Team after retiring from nearby Mission Viejo.

The Chinese federation is known to hire high-profile foreign coaches and pay them large sums of money to coach Chinese athletes – either in China, or in their home countries. Schubert faced tension while he was the head coach of Mission Viejo over his coaching of Chinese athletes in Mission Viejo’s facilities.

Schubert will continue working with the group as technical director and consultant, while his on deck coaching position will be back-filled with coaches already on the team. According to a release:

In conjunction with this leave of absence, The Swim Team has promoted two of its highly skilled coaches. Fernando Soraggi, Jr., who has coached along Coach Schubert for a number of years, will assume the Head Coaching position. Fernando has extensive experience in the sport of swimming and nearly 5 years of working with Coach Schubert makes him well prepared to lead our National Group and club during this time.

The program’s executive director Tim Teeter says that spending time in China was always an option when the club brought in Schubert to launch its pro group.

The two highest-profile names to have joined Schubert’s group are Justina Kozan, who trained under him at Mission Viejo previously, and Michael Brinegar, who announced after the NCAA season that he would turn pro early and train with Schubert in California. Kozan is a member of the USA Swimming National Team, while Brinegar represented the US at the Tokyo 2020 Olympic Games.

Brinegar didn’t swim at the recent US International Team Trials, but Kozan did. Her best finish was 7th in the 400 IM, and she was slower than her personal best times in all three races she swam. Kozan is a high school senior and is committed to swim at USC beginning next fall, where Schubert was formerly the head coach.

Schubert was the USA Swimming National Team head coach from 2006 until 2010. He was also previously the head coach at USC and the University of Texas. He served as a member of the US Olympic Team staff at the 1984, 1988, 1992, 1996, 2000, 2004, and 2008 Olympic Games. He also led the Mission Viejo Nadadores to 9 national team titles in his first stint with the club, and coached swimmers like Janet Evans, Shirley Babashoff, Brian Goodell, Mike O’Brien, Sippy Woodhead Kaitlin Sandeno, Jessica Hardy, Larsen Jensen, Erik Vendt, Lindsay (Benko) Mintenko, Ous Mellouli, and Dara Torres,

Swimswam keeps tweeting this arrive every hour. You wonder what kind of beef is between him and Braden at this point.

Don’t have beef or don’t tweet it every hour 🙂

Elite coaches from one country, coaching other nation’s teams is extremely common in most sports, from soccer to basketball to…swimming. In the same vein, top global companies like BlackRock – largest money manager in the world, global Swiss food company Nestle, and most others have massive involvement in China. Look too at the NCAA championships where so very many of the top swimmers are foreign and end up in the next Olympics competing against the very country that educated them, for free! And we all applaud these actions as appropriate in a free country.

So in a larger global view it makes no sense to criticize a top professional American swim coach for taking a position in another country. Schubert… Read more »

Kozan is back at Mission.

Being on MVN while he was head coach was the worst experience I’ve had, especially when he had the Chinese swimmers. I didn’t swim under him so I and my teammates in lower senior groups received third-rate treatment, effectively banished to the subpar facility at JSerra to train (don’t get me wrong, beautiful pool, but far, somewhat ghetto, not up to regulation, and not suitable for club training; didn’t feel like home either). He fractured the family culture that we had at Nadadores which hasn’t started to come back until now. Thank goodness for Logan and Jeff.

“…somewhat ghetto…” JSerra is a private HS that has top notch facilities and tuition of ~$20.000. You were probably to slow to swim for Mark and focused more on gossiping. It looks like the “family culture” is back.

I can’t believe that he will work for communist party China, they probably pay him big money.
The man has no principle!

He worked with them until the around march 2020. Once the pandemic started it and travel was banned/limited they cut ties.

I really feel like there should be some legislation that prevents any coaches from the US from coaching in countries that commit human rights violations against their citizens like China does. Just take a look at their treatment of Uighurs, Falun Gong, and their continued suppression of citizens in Shanghai under the guise of COVID.

This also makes me think extremely poorly of Schubert. I get they’re offering him a bunch of money, but he’s showing his true colors.

I also got the same “poor look” vibes when reading that.
Then thinking about it, I realized that most of the companies we work for do something that isnt great. Feels like its easy to point the finger then say its different when its us trying to pay the bills or retire better/early or vacation.

12
0
Reply
Pacific Whirl
Reply to  Why

Since your conclusions are basically extracted from online reports, you can travel there and witness in your own eyes if you are interested in their life,

Things haven’t changed in 40 years. Follow the money and to H_ _ _ with the kids.

This article is not up to date. Justina Kozan returned to MVN a few weeks ago.