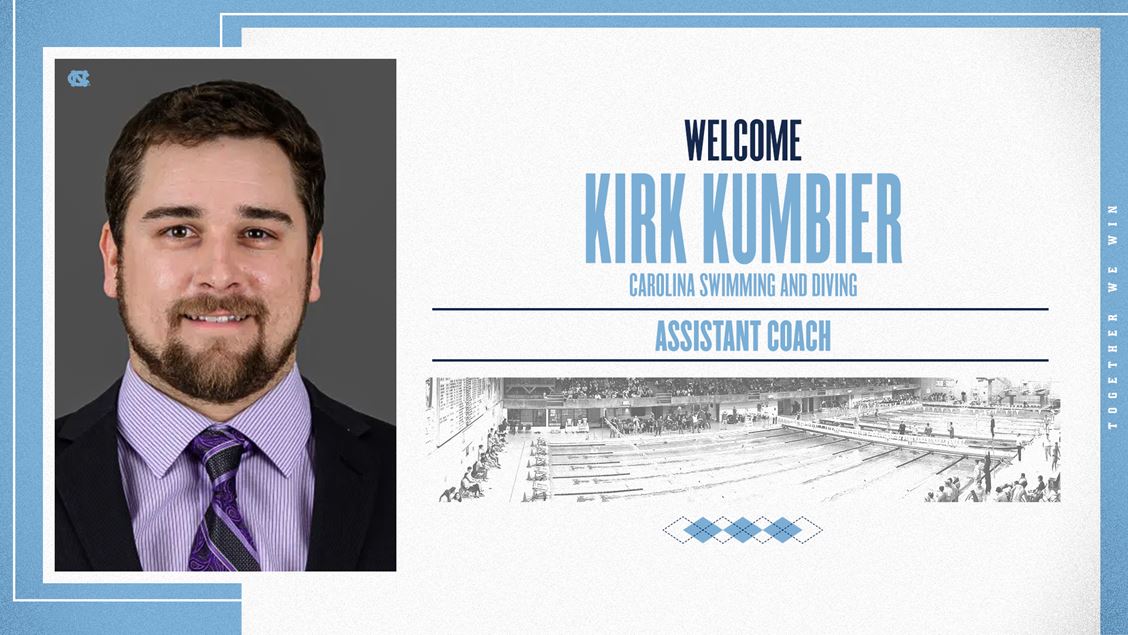 Kirk Kumbier spent last season at LSU as a volunteer assistant. Prior to that, he was a sprint coach at UCSD. He replaces Kirk Grand, who led UNC's sprint group. Archive photo via UNC Athletics

Kumbier spent last season as a volunteer assistant on the new-look staff under first year head coach Rick Bishop at LSU. He also was the head age group coach of the affiliated Tiger Aquatics club. Prior to that, he spent three seasons as an assistant coach at UC San Diego, which was a Division II program at the time (and is currently transitioning to Division I).

At UCSD, Kumbier primarily coached the sprint events and served as a recruiting coordinator. Three athletes in the program’s sprint group qualified for the US Olympic Swimming Trials.

Grand’s previous role was also with the sprint group.

Prior to UCSD, he coached at Allegheny College from 2011-2014, including as head coach in his final season at the program. There, he led 9 swimmers to a combined 14 school-record swims at the Division III level.

He also swam at the Division III level, graduating from powerhouse Kenyon in 2011. He was a member of three consecutive NCAA Division III title-winning teams in 2008, 2009, and 2010. He later received a Master of Education from Missouri in 2016.

Gangloff was previously an assistant coach at Missouri before being hired by UNC as their new head coach in 2019. The North Carolina women finished 4th out of 12 teams at the 2022 ACC Championships, and the men finished 7th out of 12 teams. Those positions were both higher than the 7th and 10th place finishes, respectively, they had the year before Gangloff arrived.

A wave of new coaches are coming to the conference next season, with two programs (Pitt and Notre Dame) hiring new head coaches, and with coaching staffs of several other programs losing assistants to those new programs, among other places.

I know they brought in Brad Kline to interview

Swam for Kirk for 2 years at UCSD. He’s an amazing, caring and knowledgeable coach, and is going to take their sprinters to the next level. Having coached the NCAA d2 men’s 50 free national champion (2020) at UCSD and helping coach Brooks at LSU this year, he’s going to do great. Wishing you the best Kirk!

The great thing is they only have to change half of the nameplate on the office door!

I know him and his mom, good folk

Are you implying that you can’t be a good coach unless you have D1 experience? I’m sure there are a lot of great D2 and D3 coaches and even mid major D1 coaches that aren’t even looked at for positions in power 5, even with more experience and better results. I’ll never understand that stigma

Mid major coaches with barely any funding that somehow get people qualified for ncaas. There are some REALLY good ones.

We’ll start off with any non-power 5 teams ranked above any power 5 team (other than Boston college that doesn’t seem fair) Harvard, SMU, Queens, Princeton, Drury, Navy, Penn, (all ranked above UNC) then TCU, UCSB, Indianapolis, Cincinnati, Yale, Army, (Emory ranked 50th right under LSU). Then if we look at NCAA’s Columbia and Towson both scored point at NCAA’s which outperformed some Power 5 schools that scored 0. This is just on the mens side, I’m sure there are more on the womens side.

my bad, UNLV not TCU. Also I’m sure there are more I’m just lazy and collegeswimming doesn’t go past 50 but I know for a fact kentucky isn’t top 50 on the mens side

If McKeever is any indication of what you learn in D1, ADs might be wise to steer clear and recruit elsewhere for a bit…