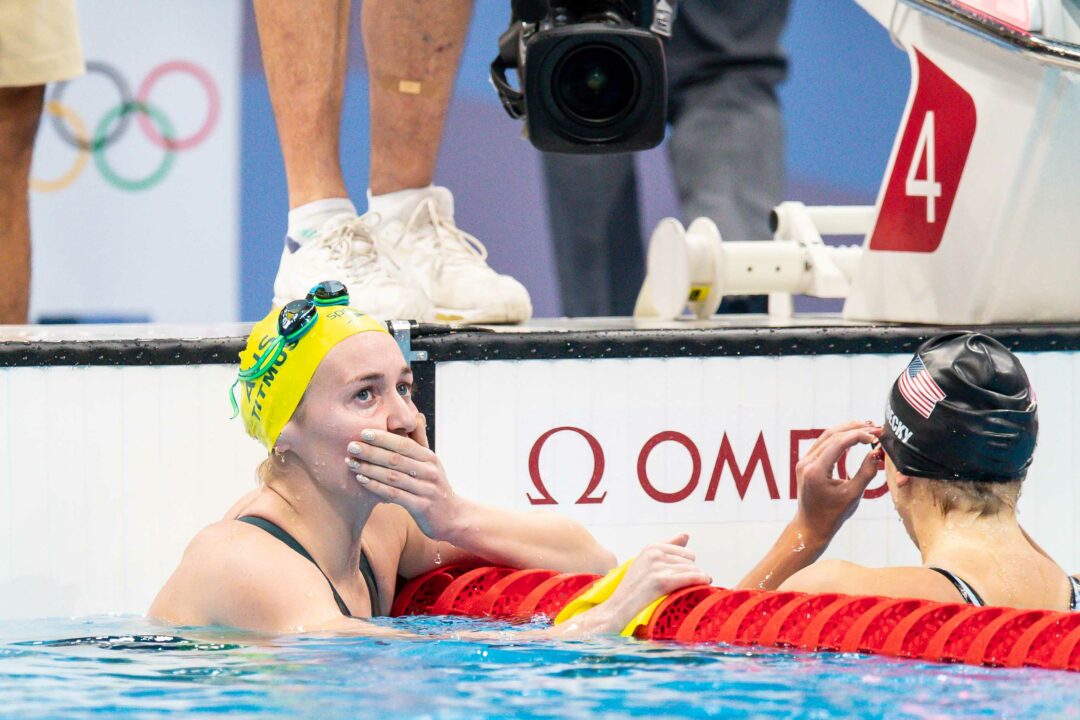 Titmus is over six months older than Katie Ledecky was the last time she set a world record, which came in the 1500 free back in 2018. Archive photo via Jack Spitser/Spitser Photography

It’s no secret that in the sport of swimming, as athletes age, they tend to come down in distance.

Distance freestyle, particularly on the women’s side, has historically been dominated by younger swimmers.

Katie Ledecky has been the gold standard for the past decade, setting and re-breaking world records in the 400, 800 and 1500 freestyle since 2013, but she hasn’t lowered an all-time mark in four years.

At 21 years and eight months old, Titmus is older than Ledecky was when she last set a world record.

If we look at the history books, it’s extremely rare for any female swimmer to set a world record in the 400, 800 or 1500 free past their 20th birthday.

In the 400 specifically, Titmus is the second-oldest swimmer ever to break the record.

In 2008, Great Britain’s Joanne Jackson set a new world record at 22 years and six months old, and Laure Manaudou (age 20 in 2006) is the only other non-teenager to set a world record in the event.

History tells us that female distance swimmers peak somewhere around the ages of 15 and 19, and decline after that. Some of that may be due to the fact that, in many cases, swimmers don’t continue competing long after that, but the distance events are still clearly more dominated by youngsters relative to the 50, 100 and 200-meter events.

But Titmus’ swim might tell us that trend is shifting. She’s an immense talent who has consistently been improving over the years, and shows no signs of slowing down.

And for Ledecky, she appears on track to challenge her personal best times this summer after making the move to Florida post-Tokyo, despite being, at 25, historically old for elite women’s distance swimming.

Is this a sign that the trends in women’s distance swimming are shifting? Or is it simply that Titmus and Ledecky are a pair of generational talents who are outliers?

At Tokyo 2020, among the six swimmers that finished in a podium position in the women’s 400, 800 and 1500 free, only one, China’s Li Bingjie, was under the age of 20 at 19. And while there are some up-and-coming teenagers knocking on the door, such as Canadian Summer McIntosh (fourth in the 400) and American Katie Grimes (fourth in the 800), the older swimmers are holding their own more so than we’ve seen in years past.

For those comparing the ages of record-setters in swimming and running, those are pretty different sports physiologically. There are many reasons for this (load-bearing vs. not, different body types, etc.), but one of the big one is flexibility. Teenagers have naturally better flexibility than older athletes. This imo is one of the main reasons that teenage swimmers often excel, even though aerobic development hasn’t peaked yet. Flexibility is very important is swimming, especially distance swimming, and even more so in some other sports (diving, gymnastics, figure skating) that have even younger women (girls) at the elite level.

On the other hand, flexibility is often detrimental for distance running. Studies have shown runners with tighter hamstrings have higher efficiency than those… Read more »

Something’s wrong with swimming. Looking at other endurance sports (cross country, track and field, triathlons, cross country skiing etc.) there’s nobody else that has athletes peaking in their teens and slowing down from age 20 on. The men’s 1500 at US and AUS trials have also been great examples of this. Finke was the oldest entrant at 22 correct?

I’m not claiming to know the answer, I just don’t that’s how physiology is supposed to work.

Yes this. In biathlon people are considered young until the year they turn 26

Could be that there’s more potential in the distance events. They’ve stagnated on the mens side since Perkins/Thorpe/Hackett while we’ve theoretically gotten better at moving through the water at a truly faster speed (Popov vs. Dressel) and at older ages (Ervin 2000 vs. Ervin 2016). If we look at track events again, we can guess that distance swimming is less physically taxing on the body via the amount of volume the swimmers can handle vs. the volume track athletes run in a week. Even pace work is far better in the pool. Most 4:00 400m swimmers will have an easier time doing repeat 1:00 100s compared to a 4:00 1500m runner doing 1:00 375s. I don’t know of any track… Read more »

Agree. Distance swimmers need to swim a lot, but there’s a eventually a limit to volume the shoulders can take of this “abnormal” motion at a high intensity. There’s been a ton of innovation and advancement in improving shoulder strength and stability (prehab) which has surely helped some of these swimmers stay in it so long. It’s pretty amazing that Ledecky has been at this level for so long without any major injury (that we know of).

Running is more enjoyable when doing “easy runs” than swimming tbh. We’re land animals fighting against our natural physiology to do a sport unnatural to us.

10
-1
Reply
too fly
Reply to  monsterbasher

Idk, the water calms me

Titmus never would have broken the record if she hadn’t altered her pacing. The “older” female distance swimmers never have the late closing burst. I’ve seen that all my life. Records are threatened midway then it becomes laborious. Even Titmus was heading in that direction last week over the final 25 meters, to the shock of the Australian commentators.

Ledecky will never break her personal bests. That was my stance after Rio, that we had already seen her apex. Fortunately she realized the significance of attacking the 1500 while still in her teenage prime. But her margin over the field is so substantial at 800 and 1500 I think she can become an extreme outlier and still contend if not… Read more »

With regard to the All-Time Top 25 Performances in the women’s 1500 meter freestyle, Katie Ledecky’s name is the only one listed more once.

I know it’s different for men, but looking at Eliud Kipchoge, who set the marathon world record and won Olympic gold in his late 30s, I think we need to reframe what “old” is given the current science on nutrition and longevity. I think these age barriers are more arbitrary than they might seem.

I wonder if anyone has a sports science theory as to why swimmers seem to be able to maintain form better in the shorter distances as they age, while mid-distance/distance runners almost always step up to longer distances, including marathon-half marathon road races, once they can no long execute a fast kick on the track. Marathoners commonly reach ther peak in their 30s.

Wasn’t Jenny Turrall 13 when she set the world record? Or was that the 800?

Something like… that but her and Shane Gould and the others of that era were the start of modern training under Forbes Carlile. It was more to do with the shear workload he was able to get into them at an early age.

Meanwhile, Katinka Hosszu set the world record in the women’s 400 meter individual medley at the age of 27.

Titmus started improving in 2018 when she was 18 years old and right now she’s starting hitting her peak.

“…Titmus’ swim might tell us that trend is shifting…” No, it’s just that she is a late bloomer compared to the other mid/distance swimmers.

As for Ledecky, sorry but there is no PBs for her anymore. She needs to hope that Grimes doesn’t make big leaps in the next year or two.

As for personal beat times, one event that is rarely mentioned is the women’s 4 x 200 meter freestyle relay splits.

Katie Ledecky may have set a personal best relay split in the women’s 4 x 200 meter freestyle relay at the 2022 FINA World Aquatics Championships for the USA women just to medal.