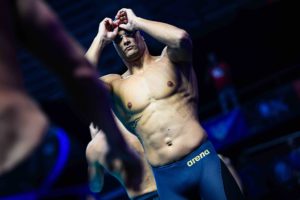 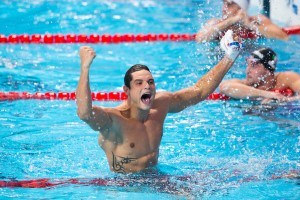 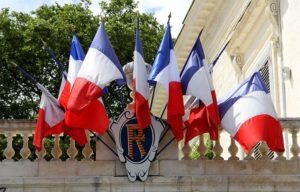 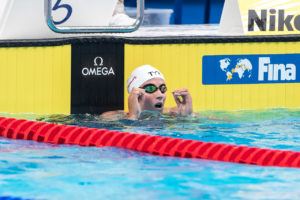 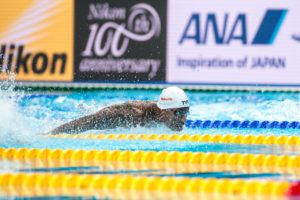 Laure Manaudou was born on October 9, 1986 in Villeurbanne, France. She has competed in three Olympics since her first major international appearance in 2004. Though she has settled and retired, she has left several permanent marks on the sport of swimming, and was, for a time, an unfortunate target of much of the sport’s gossip in the mid-2000s – the price she paid for youthful glory.

Leading up to the Athens Olympics, 17 year-old Manaudou surfaced internationally when she won three gold medals at the 2004 European Swimming Championships in the 100 back, 400-meter free, and the 400 free relay. In Athens, Manaudou earned three medals as well – a gold, silver, and bronze. The gold, won in the 400-meter freestyle, was France’s first Olympic win in women’s swimming. Manaudou also came in second in the 800-meter free, and captured the bronze in the 100 back.

The following summer, she earned her first World Championship title in the 400 free. For the next year, she chased Janet Evan’s 18 year-old world record in the event, finally smashing it in May 2006 during French championships. Manaudou bettered that record several months later at the European Swimming Championships in Budapest. She also won the 800-meter freestyle, the 200 individual medley, and the 100 back. In France, she became a superstar – a household name, a heroine.

That December, Manaudou declared her love for Italian medley sprinter, Luca Marin, by writing it on her hand and displaying it for the world to see after she touched the wall during European Short Course Championships. However, she stayed with her coach, Philippe Lucas, in France, until after her success at the 2007 Melbourne World Championships. In Melbourne, she broke the 200-meter freestyle world record, defended her 400-meter free title, earned two silvers in the 800 free and the 100 back, and helped France to a bronze in the 800 free relay, for a total of five medals at the meet.

Move to Italy and relationship controversy

A month later, the 20 year-old starlet moved to Italy to prepare for the 2008 Olympics while also keeping close to Marin. Looking back on that time, Manaudou admits that she thought Marin was the love of her life. She occasionally wore a cap with his name on it during competition, and was often photographed with him in Italy. However, she left the Italian club with whom she had been training in Turin after an unexplained disagreement, and returned to France to train under her brother Nicholas, who was also coaching her younger sibling, Florent.

Her romance with Marin ended in disaster at the next European s/c Championships. Though she swam several powerful races, touching first in the 100 back and 400 free, her success was eclipsed by a changing room argument with Marin that ended in Manaudou tossing away her engagement ring. Days later, nude photos of Manaudou appeared on the internet; Marin denied any involvement in their release, and promptly returned to Italy, where he started up a romance with Manaudou’s 400 free rival, Federica Pellegrini.

The two faced-off in the event at the Beijing Olympics, though neither medaled. Manaudou came in eighth and did not reach the podium in any of her other events at the Olympic competition. The media portrayed Manaudou’s less-than-stellar performance as a major disappointment, an outcome of leaving the tutelage of Philippe Lucas, switching coaches twice in the year leading up to the Games, and getting caught up in love. In 2009, Manaudou opted out of World Championships in Rome (where Pellegrini would take her record), and, in September, she announced her retirement from the sport. By then, she had kindled a romance with French Olympic swimmer, Frédérick Bousquet. The following April, their first daughter, Manon, was born.

During her retirement, Manaudou volunteered with the Auburn University Tigers, where Bousquet trains. Perhaps aided by the peaceful anonymity of living in the United States, and staying close to the water even after her retirement, Manaudou decided to train at Auburn. She made her comeback in July 2011 at a Sectionals meet, swimming for the Tigers, but did not compete in the World Championships that summer. In March, she returned to France for French Olympic Trials. While Bousquet did not qualify, Manaudou and her younger brother, Florent, rejoiced in earning spots on the French team.

Unfortunately, Manaudou did not make it passed preliminary heats in any of the three events in which she qualified, and spent most of her time in London cheering for her French teammates. However, she was still able to celebrate her brother’s surprise win in the 50-meter freestyle – she notoriously jumped the barriers onto the pool deck in order to congratulate him. With Florent’s gold, the Manaudous became the first Olympic champion siblings in the sport of swimming.

In the months after the Games, Manaudou returned to France to train, amidst rumors that she was considering retirement a second time. None of this was confirmed until the beginning of the new year, when Manaudou announced her second pregnancy. She assured the public that this time, her retirement was permanent, and was not based solely on her pregnancy.

In March of 2013, she ended the pregnancy for medical reasons, and split from Bousquet; both said the break was unrelated to her operation. Since then, she was a model and ambassador for the French sportswear brand, TOPSEC, and released her own swimwear line in conjunction with the company. In the fall of 2014, Manaudou published her autobiography, Entre les lignes – Between the Lines. Rumors that it could become a film soon followed. She briefly revisited the limelight of scandal later in the year, when she was accused of attempting to steal merchandise from Disneyland Paris, an incident that still goes unexplained.

Manaudou spends much of her free time with her daughter, Manon. On her website, Manaudou writes that reaching international stardom at such a young age and focusing all her energies on the sport might have been too much, but that now, she has plenty of time left to cherish the little things she missed.