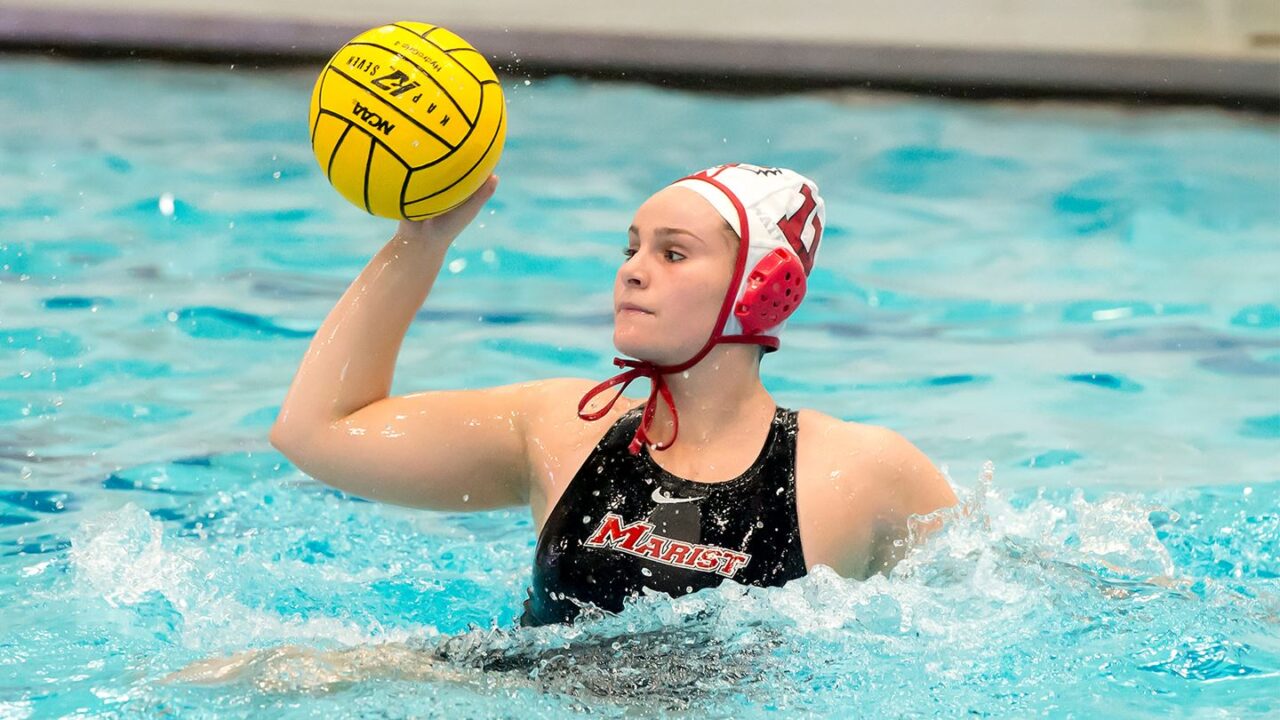 The Marist water polo team defeated the Siena Saints 15-14 on Wednesday evening, moving to 1-0 on the season while Siena drops to 0-7. Current photo via Marist Athletics

With the win, Marist goes to 1-0 on the season. Meanwhile, Siena drops to 0-7 on the year.

The Red Foxes are back in the pool tomorrow, traveling to New Rochelle for a bout against Iona. The game is set to begin at 7 p.m.

LOUDONVILLE, NY – Siena Water Polo (0-6) battled its third ranked opponent of the season to the brink Wednesday evening, returning home to the Siena Swim Center following a four-match road trip. The Saints dropped a 15-14 decision to #22 Marist (1-0), with the Red Foxes scoring the decider in the final minutes.

Kicking off a stretch of four scheduled matches in five days, the Saints jumped out to a 4-0 lead early in the first quarter, with senior Kristen Burger, junior Bianca Prinsloo and sophomore Grace Boeve each finding the back of the net. Marist responded with four of the next five goals to knot the match at five after a period of play, including a goal scored with just one second remaining in the quarter.

After taking the lead to begin the second quarter, the nationally ranked Foxes scored three of the next four going to jet out to a 9-6 advantage, with Boeve completing a first half hat trick early in the period. Prinsloo made it a 9-7 game by converting on a penalty shot with 3:13 remaining in the half, and the teams traded goals to head into the half, with freshman Sydney Arnold finding the goal for the first time in her collegiate career.

Working alongside a career performance from sophomore goalkeeper Anna Mossakowski in-between-the-pipes, The Saints looked to compete deep into the second half, with Prinsloo completing her hat trick off a power play goal with 4:55 remaining in the third to put the Saints back within a goal. Marist did not let up offensively, however, keeping pace with Siena in the third quarter and scoring with seven seconds remaining to lead by two once again after three.

The Saints scored three of the final five goals of the game but were denied the chance to knot the match as time expired. After the teams traded goals to start the period, Boeve made it 14-13 at the 4:40 mark and senior Sophia Torres tied the game for the first time since early in the second quarter with 2:01 remaining. Marist won the game by drawing a penalty shot and converting with 1:43 left, then stopping Siena defensively to lock up its first win of the year. Mossakowski ended the night with a career high 15 saves in-goal, while Prinsloo scored five times on 12 shots and Boeve tallied four goals on 10 attempts.

Siena will continue a three-match home stand with doubleheader action on Saturday, April 24. The Saints will host conference rival VMI at 10 AM before welcoming nationally ranked Iona to Loudonville at 4 PM.

Lol so the Marist water polo team can compete but the swim team can’t even have a practice. Good job Marist.