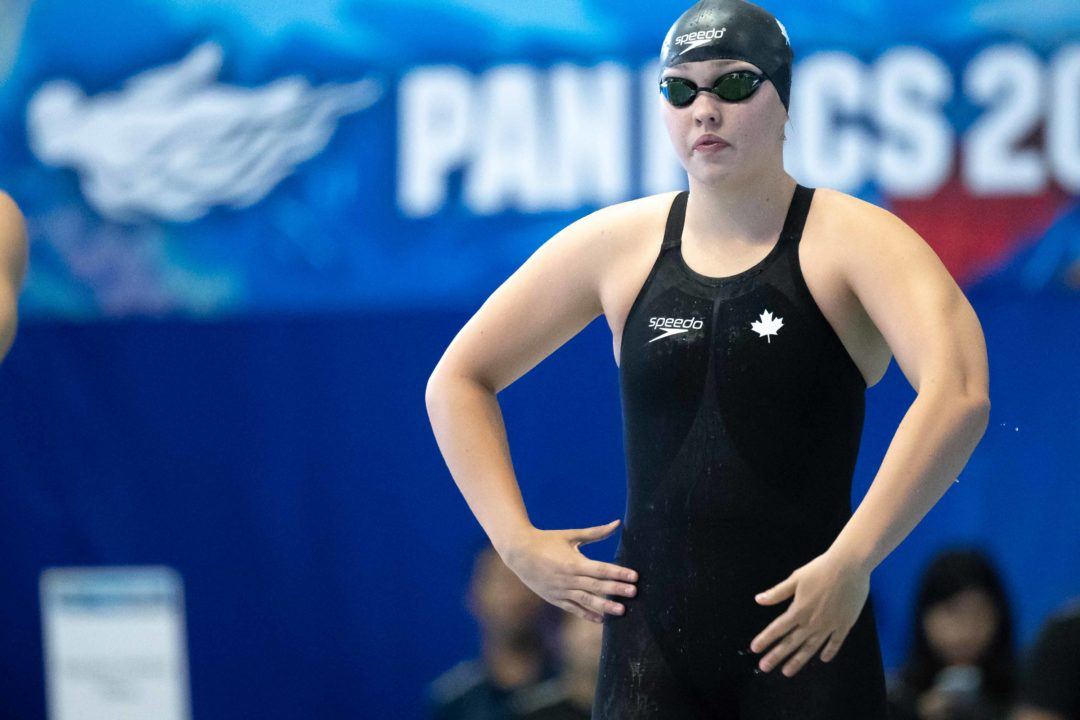 The Minnesota women won 5 out of 6 swimming events on the final day of the 2018 Hawkeye Invitational at the University of Iowa to complete their runaway team title, while the surprising Purdue men, even without the participation of their best-in-class diving group, won by a comfortable 62.5 points ahead of the Gopher men.

Last season, Padington focused on middle distance, swimming the occasional 1000 free but never the mile in her first year of yards racing (she’s Canadian by birth). She swam to a 16:33 in the team’s dual against Florida State earlier this season, and has now knocked another 30 seconds off that time for a result that ranks her 5th in school history. She also posted wins in the 500 free (4:37.01 – lifetime best) and 200 free (1:44.23) earlier in the meet, with the 500 earning her a probable invite to the NCAA Championships in March.

A 1-2-3 sweep by the Golden Gophers was led by Tevyn Waddell, who continued her big meet with a new lifetime best of 1:52.46 to win. That knocked a full second off her previous best – which was done at the ACC-B1G Challenge last week. Waddel previous set a lifetime best in the 200 IM this weekend as well.

Nack also knocked off her previous best time from Big Tens last year (by about 8-tenths).

Grand Canyon senior Mark Nikolaev won his 3rd event of the meet with another dominating performance, this time swimming a 1:40.81 in the 200 yard back for a more-than-3 second advantage. That’s about 3-tenths faster than what it took to qualify for NCAAs last year, without regard for the probable improvement in those requisite invite times.

That swim matches, to the hundredth, his season-best from last season, which was done at the WAC Championships; and is exactly 2 seconds faster than his mid-season time last year.

Iowa school record holder Kenneth Mende took 2nd in 1:44.25, which is about 2 seconds short of his personal best.

Minnesota senior Zoe Avestruz led virtually wire-to-wire in the women’s 100 free final, edging-out Iowa’s Hannah Burvill 49.57-49.74. Burvill’s 49.52 from prelims was the fastest swim of the event (and her 49.53 relay leadoff to end the session was also faster than her finals swim). This mimicks a pattern we saw from her in the 50 free earlier in the meet, where she broke the school record in prelims, and on a relay leadoff, but was slower than both in the event final (though in that case, she pipped Avestruz).

Iowa finished 2-3-4 in this race, though later, in the 400 free relay, Minnesota had enough quality among their non-pure-sprinters to still easily take that event (including a 48.8 leadoff from the distance swimmer Padington).

Minnesota senior Bowen Becker completed a sprint sweep with a new Meet Record in the men’s 100 free final in 42.99. Both he and Grand Canyon freshman Mazen Shoukri (43.40) undercut the old record set in 2012 by Michigan sprinter Miguel Ortiz. Several Michigan swimmers from that season have had records undercut at this meet – that was a year where they were en route to an NCAA team title.

Another freshman, Purdue’s Nikola Acin, took 3rd in 43.53. That’s the fastest time in program history by a freshman, and comparatively only a tenth behind the All-American Becker’s freshman best at Minnesota.

Minnesota junior Lindsey Kozelsky was about half-a-second slower o Saturday than her time from last week’s ACC/Big Ten Challenge (where she finished 3rd as part of a 1-2-3-4 Big Ten sweep). That was still enough to cruise to a win by more than 2 seconds ahead of SMU’s Anna Podmanikova, who took 2nd in 2:11.68.

Podmanikova, who is the American Athletic Conference leeader this season (by more than 3 seconds) in the event, was well short of her best time of 2:09.5 done at the SMU Classic to open the season in October. That time should already have her spot for NCAAs booked (it took a 2:10.14 last season to earn an invite).

Osvath’s usual breaststroke running-mate Blair Bish, who is the 2nd-fastest in school history (behind Osvath), was disqualified in the final.

SMU freshman Olivia Grossklaus crushed her personal best (by 2.3 seconds) to win the women’s 200 fly final  on Saturday. She was followed by a more modest lifetime best by her teammate and training partner Erin Trahan (1:58.70 – about 3-tenths off).

Nebraska’s Coughlen, in 3rd, also had a lifetime best.

This marked the only women’s race of the day that Minnesota didn’t win.

Matching Nikolaev’s dominance from earlier in the session, Daniil Antipov, another member of Grand Canyon’s history-making senior class, won the men’s 200 fly in 1:42.35 – by more than 4 seconds ahead of the field. That also broke his own school record in the event, which was set at last year’s WAC Championship meet.

Diving in her best event, Nebraska All-American Abigail Knapton ran-away with the title (and Meet Record) in the women’s platform event. She finished 8th at NCAAs last year, though she pushed through prelims 3rd.

Nick Yang, also diving in his specialty event (he placed 5th at NCAAs last year), broke a Meet Record of his own with a score of 398.85.

In a rather anti-climactic relay, Minnesota won the women’s 400 free relay by 4 seconds ahead of Iowa. That was thanks in large part to the up-front swims from two non-sprinters: mile champion Mackenzie Padington, who led off in the day’s best flat-start time of 48.80; and backstroker Chantal Nack, who split the day’s best 48.72 on the 2nd leg.

At that point, they were handing off to the 100 free event champion Zoe Avestruz with over a 2 second lead on a deep Iowa relay, and that was more-than-enough. Avestruz (49.43) and anchor Tevyn Waddell (49.15) would double the Gophers’ lead.

Bookended by their seniors Nikolaev and Antipov, with a pair of freshmen Shoukri and Florent Janin in between, Grand Canyon rolled to a Meet Record in the men’s 400 free relay to finish the day. Nikolaev led the team off with a 42.54, the fastest split (flat or rolling start) of the entire field. The time was also just .09 seconds behind the school record from 2016.

How is it “surprising” purdue won…they beat Iowa and Min at big ten last year?

As was pointed out just a few words later – because they didn’t have divers. They had divers at Big Tens, yes? That’s a lot of points to give up in an invite format and still beat a team like Minnesota. They spotted Minnesota somewhere closet to 200 points in diving. It’s surprising that Purdue out-performed Minnesota by ~250 swimming points.

Anybody who expected that margin in the pool is probably a Purdue fan, parent, or athlete who will naturally have a far higher expectation of Purdue than what a rational & disinterested observer would have.

Although Purdue had a spectacular performance, Purdue was shaved and had a larger taper compared to Iowa and Minnesota. Purdue did show outstanding depth.

I heard they started the taper three months ago!

Sigh. This is how we read the news today. We find one word that we can glom onto and get offended about, ignoring intent or context, because being pissed makes us feel like we’re making the world a better place.

It is surprising that Purdue beat Minnesota with no divers, deal with it.

What happened in the men’s 400 free relay

Men’s Iowa A relay got disqualified for early first exchange