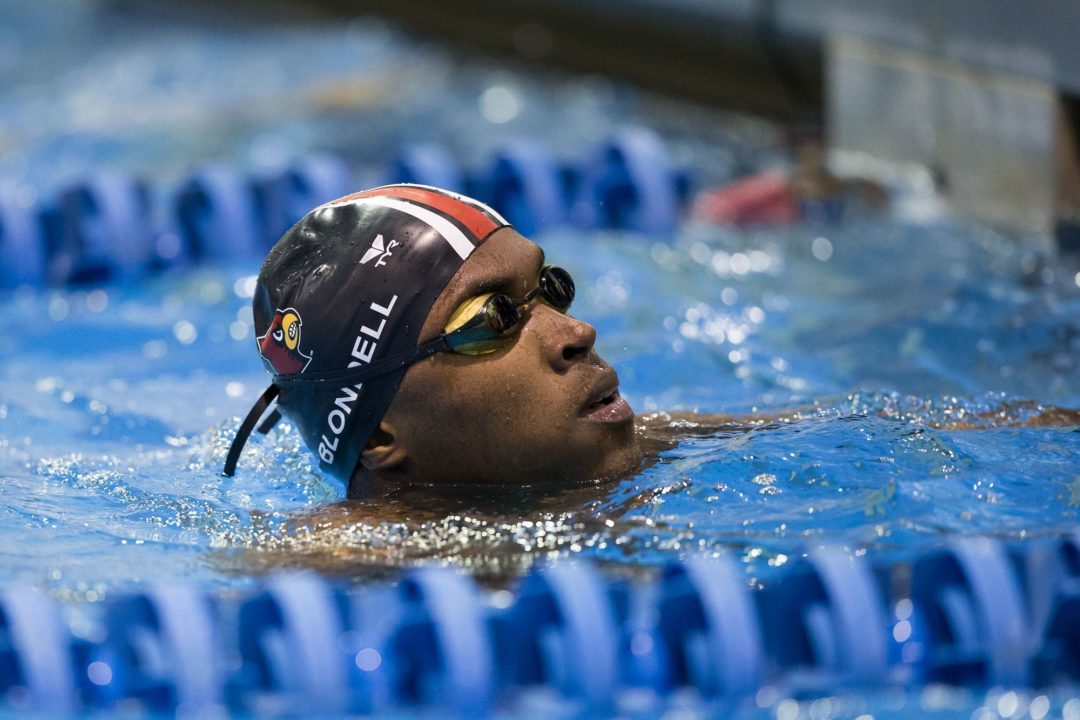 Carlyle Blondell split 18.8 for the Louisville men on the 200 medley relay, which broke a pool record. Despite winning both relays, the Cardinals trail SMU by 28 after day 1. Archive photo via Tim Binning/TheSwimPictures.com

The Louisville Cardinals, hosting the first-ever American Athletic Conference Championships, swept all four relay events on the first day, helping the women jump out to an early lead. SMU currently sits atop the men’s points thanks to a 1-2-3 finish in diving.

The very first split of the very first race in the brand-new conference started things off with a bang for Louisville. Sophomore Kelsi Worrell went 1:44.97 leading off the 800 free relay for the Cardinal women, breaking the school record and staking her teammates to a solid lead. The rest of the team – Andrea Kneppers, Abbie Houck and Breann McDowell – did the rest, finishing in a 7:08.67 that was another Louisville school record and topped the field by two seconds.

Not to be outdone, the Louisville men matched their women, winning big and breaking a school record in the process. Of course, star 200 freestyler Joao de Lucca was the spark plug, splitting 1:32.36 in a meet he’s likely not fully rested for. But the rest of the relay was awfully fast as well, with Trevor Carroll, Matthias Lindenbauer and Thomas Dahlia all splitting 1:35s, and that was a leadoff split for Carroll. That crew was 6:19.25 – the only faster men’s relays we’ve seen this year have been Florida and Auburn last night at SECs and USC back in December.

Connecticut was second in a distant 6:33.73, just edging out SMU by half a second.

The only individual events run were diving. The men competed on 1-meter with SMU junior Devin Burnett leading a 1-2-3 Mustang punch. He scored 386.80, freshman Bryce Klein posted 376.60 for second and junior Hayden Hodges was third with a 346.95. Those three were well checked out from the field – the only divers over 300 points on the night.

The women dove on 3-meter, with UConn sophomore Taryn Urbanus winning a very tight battle with a pair of Houston Cougars. Urbanus scored 313.55, just 3 points up on Houston’s Natasha Burgess. Her teammate Taylor Olanski was 7 points back for third place.

After the diving break, Louisville came back to sweep the 200 medley relays. Kelsi Worrell pulled the double for the ladies, swimming fly on this relay and splitting 23.16. Krissie Brandenburg, Andee Cottrell and Breann McDowell added splits on the 1:38.43 relay, which tied a pool record and just touched out SMU by a tenth.

SMU fought hard – Isabella Arcila and Brandenburg were each 25.1 on backstroke, while Cottrell opened up a lead of just two tenths on Rachel Nicol in the breast leg. Monika Babok held her own against Worrell, splitting 23.2, and Nathalie Lindborg actually outsplit McDowell, but didnt’ quite have enough in the tank to complete the comeback. SMU was 1:38.58.

The men’s race was saw Louisville once again top SMU, albeit this one by a slightly wider margin. Louisville broke the pool record, going 1:26.21 with the most notable split being anchor Carlyle Blondell‘s 18.8. This whole relay was solid: backstroker Grigory Tarasevich went 22.5, breaststroker Kameron Chastain 23.8 and butterflyer Pedro Coutinho 20.9. SMU was one second back, with backstroker Matas Andriekus grabbing an early lead but the Mustangs eventually succumbed to Louisville’s charge.

With the shortest day of racing in the books and three more full days of action upcoming, the Louisville women lead by 21 over UConn. SMU holds a bigger lead for the men thanks to their diving prowess, sitting 26 up of UConn and 28 ahead of Louisville.

Would Worrell just swim the butterflies at NCAAs and all 5 relays (assuming UL qualifies them all)???

She’s been awfully fast in the 50/100 already this year – lifetime-bests 22.4 and 48.5 in December. Definitely a potential NCAA point-scorer in both, but 5 relays could be a possibility if they could all 5 score as well.

Her entering the 200 fly still seems up in the air too. She’s basically only swam it twice in her college career. I might’ve expected her coaches to give her another tune-up swim or two this January if it was indeed the plan at NCAAs.