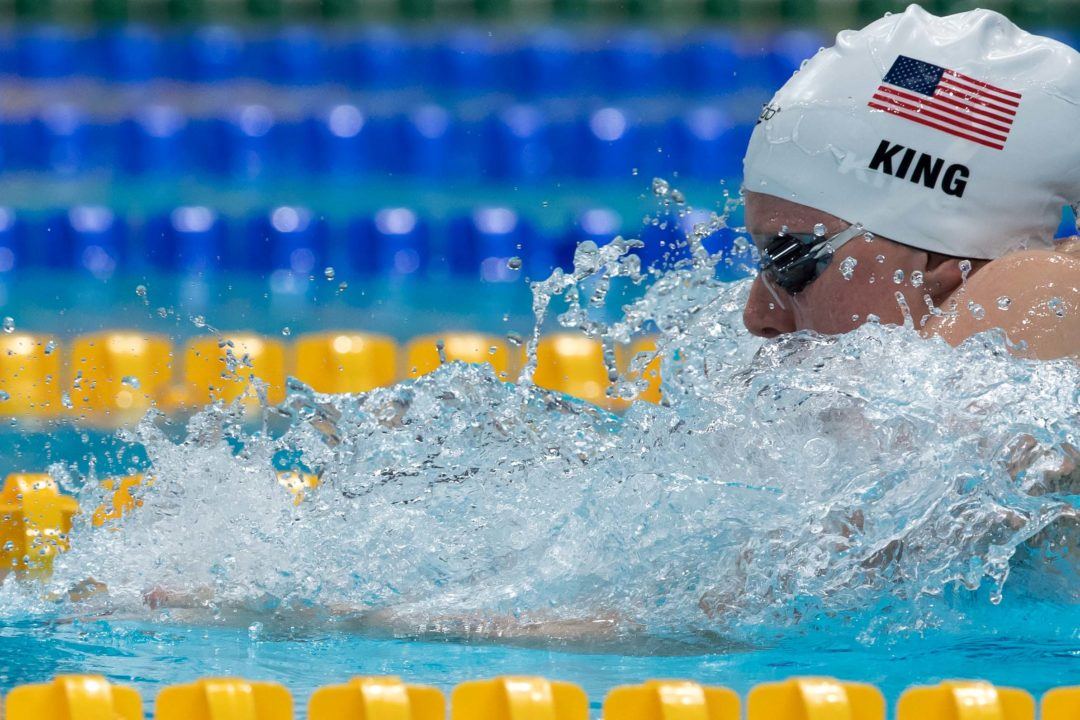 Going head-to-head with Russia’s Yuliya Efimova for the third time this week, American Lilly King picked up her second victory with a new world record in the women’s 50 breast.

After breaking the record in the 100 breast early in the meet, King bulldozed her way to a new American record of 29.60 in the 50m semis. In the final, she took down Ruta Meilutyte‘s 2013 record of 29.48 in 29.40, winning her third gold of the meet with another chance later tonight in the women’s medley relay

Efimova, the winner of the 200, won silver in 29.57, and Katie Meili picks up her second medal of the meet with the bronze in 29.99, becoming the 7th woman ever under 30 seconds in the event.

Efimova’s swim just misses her best of 29.52, and ranks as the 5th fastest swim in history. King leapfrogs Meilutyte and Efimova as fastest of all-time, and now owns three swims inside the world’s all-time top ten. The three of them have dominated this event in recent years, with Meilutyte holding four swims in the all-time top ten and Efimova the other three.

A rivalry between King and Efimova began last summer in Rio, amid Efimova’s doping controversy, but the two seemed to have buried the hatchet to a degree, embracing post race.

I missed this race and cannot seem to find a video…Anyone can provide the link?

To BIM. What you just expressed was a “more holy than thou” bunch of drivel. You completely turned the dialogue around, attacking a clean athlete and defending a cheater. The Olympic ideal, which you use to justify your criticism of Lily King, is predicated upon the concept of fair and equal competition. All King did at Rio was say, when interviewed, that she wasn’t “a fan” of athletes that cheat. The media hyped the story, but there was a moral to that story. Our rules ban cheaters, but fair play is contingent upon those rules being upheld and enforced. When FINA and or other administrative bodies don’t do so and the cheaters are able to flaunt their misbehavior, then don’t… Read more »

wow you truly disgust me. Doping swimmer wouldn’t get involved if they knew they were cheating. there are hundreds of American athletes that also got tested early for meldonium and were allowed to swim later on but American news keeps that on the down low because they weren’t good enough athletes to make a fuss about.

Olympic Games transmits a message of peace and friendship between peoples, and the Olympic truce is a tradition originating from Ancient Greece. The “fight” between the athletes must be in the Olympic pool (arena) only, but not outside of pool. Ms King attack against Ms. Efimova at Olympic games was absolutely inappropriate and against the Olympic spirit and Olympic tradition. If Lilly King would like to speak up and discuss the “drug problems” – there are a lot of legal and appropriate ways and approaches to do so. Ms. King may address her concerns, and to provide her suggestions to many different National and International Olympic and not-Olympic Committees who directly involved in fighting against the drug users. However, everything… Read more »

So…Efimova’s doping was not inappropriate, but King saying that she is not a fan was???? And by the way, Lilly now has 2 individual WRs. How many does Efimova have?

If you go by the tradition of the Olympic truce then yes. That’s what BIM is saying.

Efimova had 2 also. But the are former. And what Lilly said was NOT inappropriate, it was the person she was saying it about. Yuliya us a complicated case because they scientists tested too early. If she said it about the Russian Track and Field team there would not be a problem because they were illegally doping. You should think about if you were an Olympic swimmer making a protein shake and you get notice on December 31 to stop using it, so you do, then 4 months later scientists test you and say you are doping! you would ask why because you stopped before January 1st?! So they retested after 6 months and guess what… it wasn’t in her… Read more »

how can you guys possibly thumbs up this

Efimova is a downright cheat who tested positive something like six times last year and she should be serving a ban right now. She’s the luckiest swimmer on the planet, a disgrace to her sport and if anyone wants to comment on this, they have every right to.

6 times? where are you getting your information? Her 2 positives were on technicalities and not even true performance enhancers. Do some research before believing the propaganda.

Thank you ED P. I’m sorry that you dont have understanding for scientists to test early, GER. Maybe one day you will eat a poppy seed muffin and 2 hours later your school says you are doing drugs even though it was not a long enough time for the poppy seed to leave your body.

It was closer than I thought it will be….Efimova range is pretty good. Seeing how fast she was in 50 and 200 the sub-par performance in 100 is even more surprising.

Back in 2013 Efimova strangely could only do the 50 and 200 well but not the 100. But yes, she’s perhaps the most successful breastroker over all three distances.