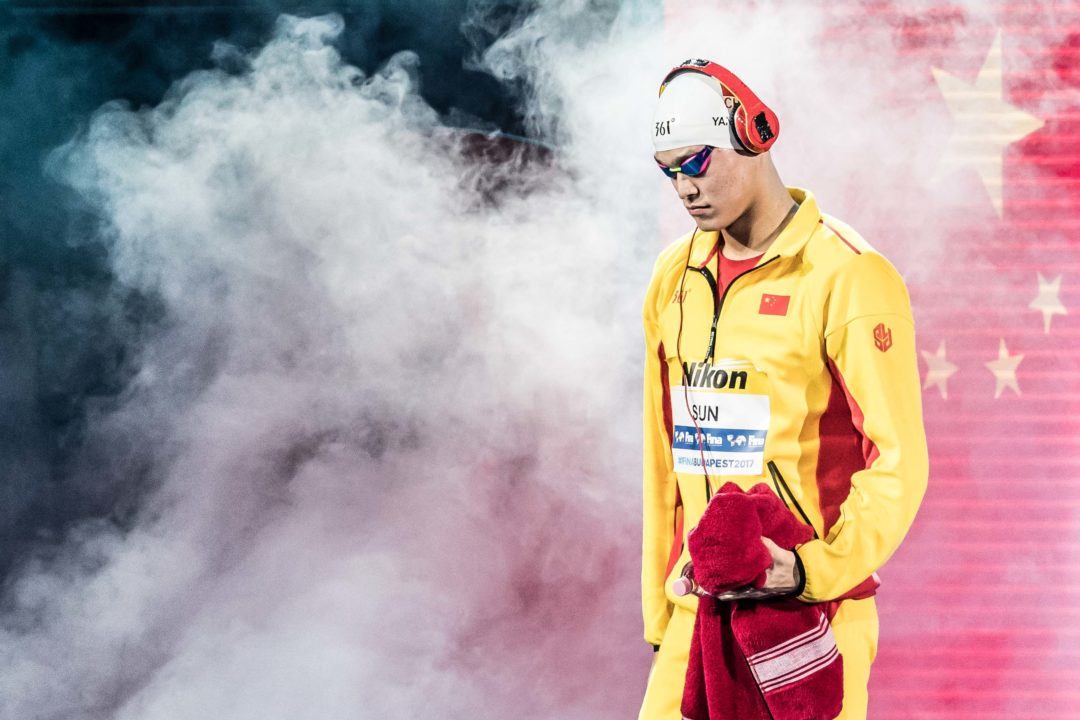 Sun Yang will try to complete his quadruple of gold tomorrow night as he takes on the 1500m free final at Chinese Nationals. Archive photo via Mike Lewis/Ola Vista Photography

In addition to the monster 800m free Chinese and Asian Record swum by 16-year-old Wang Jianjiahe , which you can read more about here, other key Chinese athletes made things happen in their respective events on the penultimate day of the 2019 Chinese Nationals.

Yu’s time slides under the FINA A cut for this year’s World Championshps by just .01.

Li Zhuhao busted out a head-turning time of 51.81 to top the podium in the 100m fly event, representing the only racer of the field to dip under the 52-second threshold.

Splitting 24.86/26.95, Li checks-in as the 6th fastest swimmer in the world this season His time clears the 51.96 FINA A cut, but is well off of his own NR time of 50.96 set at the last edition of the World Championshps. We’ll see what Li is able to muster in Gwangju against he likes of America’s Caeleb Dressel and Hungary’s Kristof Milak there.

Tonight’s other final came in the form of the women’s 200m back, where Liu Yaxin beat the field by over 1 1/2 seconds to clock a time of 2:08.44 for gold. That crushed her semi time of 2:11.50 from last night and upgraded her 2nd seeded status to top woman.

For perspective, Zhang’s time would insert the 13-year-old as the 11th fastest 13-14 female performer of all-time on the U.S. list.

Wang Yichun clinched the gold in the women’s 50m fly in 26.04, checking in with a time that sits just outside the top 5 performers this season. Runner-up status went to Zhang Yufei, who touched in 26.30, while Lin Xintong was .26 behind in 26.56.

In prelims and semi-final action, the freestyle king himself Sun Yang indeed showed up for the 1500m free heats clocking 15:14.21 to take the top spot headed into tomorrow evening’s final.

Finally, Olympic medalist Xu Jiayu is leading the men’s 50m back pack in 24.64, already the #2 time in the world this season.