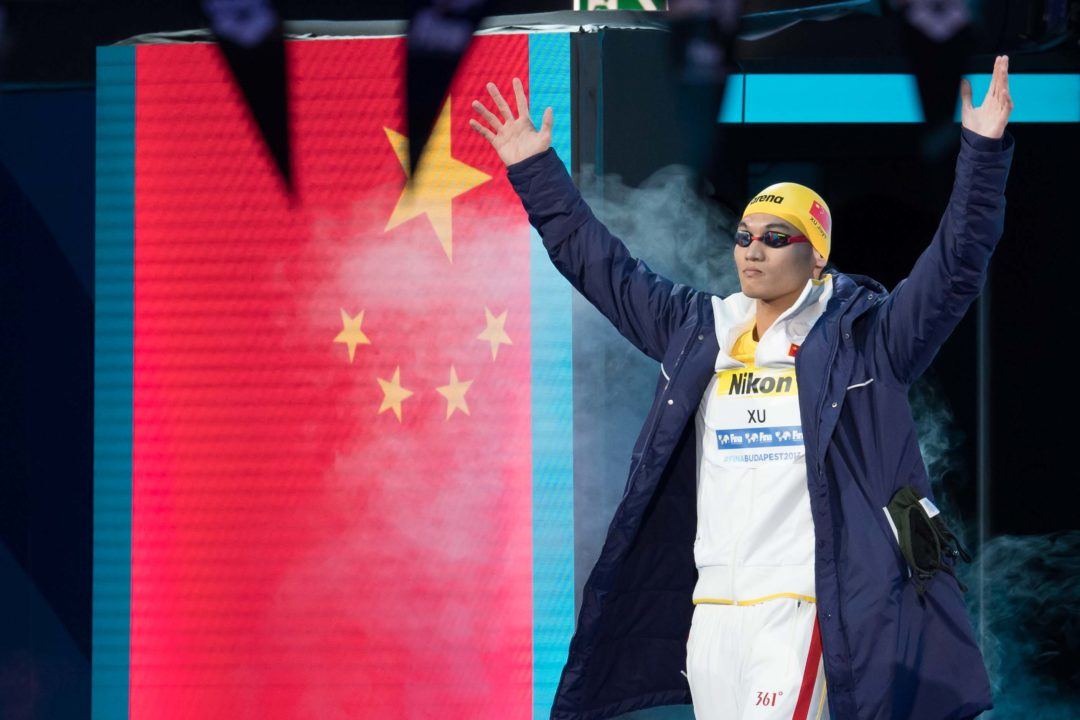 13-year-olds lead Chinese women, while Qin Haiyang and Xu Jiayu get it done for the men at Chinese Nationals. Archive photo via Mike Lewis/Ola Vista Photography

The 6th day of the 2019 Chinese Nationals saw several teenagers take to the pool and make their marks with just 2 days to go in this World Championships-qualifying meet.

Yang already appears on the world rankings list for this season, having thrown down a 54.43 at last year’s Youth Olympic Games. That mark rendered the teen a silver medalist behind winner Barbora Seemanová of Czech Republic.

17-year-old Zheng Xiaojing roared to the top of the men’s 100m fly field in tonight’s semi-final, stopping the clock in a mark of 52.29. That result enters Zheng into the world rankings for the season at #15, with his time representing a new lifetime best in the fly sprint.

Keeping with the teen trend, Peng Xuwei, just 15 years old, is in the pole position in the women’s 200m backstroke for tomorrow night’s final. Peng earned a morning effort of 2:10.74 to hold off Liu Yaxin and Zhang Wen, who collected respective efforts of 2:11.50 and 2:12.18.

Another 13-year-old has put herself in the medal mix, as Wang Yichun took the top seed of the women’s 50m fly. After notching an impressive 26.10 in prelims, the teen dropped .04 to sit with a 26.06 headed into tomorrow night’s final. Wang’s time ties France’s Melanie Henique as the 5th fastest performance in the world this season.

Wang is used to being in the thick of elite swimming, having won two medals in Hangzhou as a member of China’s 4x50m medley relay and 4x100m medley relay. She also took 50m fly silver in Jakarta at the 2018 Asian Games, clocking 26.03, just slightly faster than her performance tonight.

Look for He to break through in tomorrow night’s final, however. He’s already blasted notions of Chinese sprinting by cracking the 2nd fastest 100m freestyle time ever by a man from his nation with his 48.10 stunner from last night.

In more of the medal-garnering races, Ye Shiwen continued her comeback meet with another victory to follow-up on her 200m IM win from earlier in competition. The 23-year-old double Olympic gold medalist from London fired off a winning 200m breaststroke time tonight of 2:23.46, beating the field by over a second.

Even though Xu now sits atop the world rankings throne, the entire 200m back field worldwide has been on the subdued side to this point. Both Russia’s Kliment Kolesnikov and America’s Ryan Murphy had yet to post marks under the 1:56 threshold. But, championship season is upon us, so things will heat up among the top players.

Xu himself won the 2018 Asian Games gold in Jakarta in a speedy 1:53.99, so there’s more in the tank from this versatile ace come the main event in Gwangju.

Finally in the men’s 200m breaststroke, Qin Haiyang powered his way to the top of the podium in a monster effort of 2:08.66. That hacks just about a second off of the 2:09.65 the man put up last October at that edition of the Chinese Championships.

Qin most recently nailed silver in this event at the Short Course World Championships. In Hangzhou, Qin scored a new Chinese National Record of 2:01.64 in prelims, only to smash it to 2:01.15 in the finals. That moved Qin into the 4th slot among the fastest short course 200m breaststroke performers in history.

In the long course edition of the event, Qin holds the NR as well, with the 2:07.35 he produced two years ago. At this same competition last year, Qin produced the 2nd fastest time ever by a Chinese swimmer in 2:08.71, so tonight’s clocking overtakes that position.

😀 I’m wondering of how much of popularity Ye Shiwen has in China.
If it would be an IM duel between Ye Shiwen and Hosszu this summer then I would prefer to see Ye a winner. Why? Because if they both cheated but wasn’t caught then why one has benefited from this getting all glory and money and another one was shamed and embarrassed. If they both are clean then why so much dirt was put in the media on this young Chinese girl. So in the battle between world record holder 4:26 and ex-world record holder 4:28 I will root for the “underdog” because the life isn’t fair and some justice is needed.

Hosszu will win at this Worlds and next Olympics and I think Ohashi will be the runner-up at least in Tokyo.
Yes, life isn’t fair always the best will be the first,