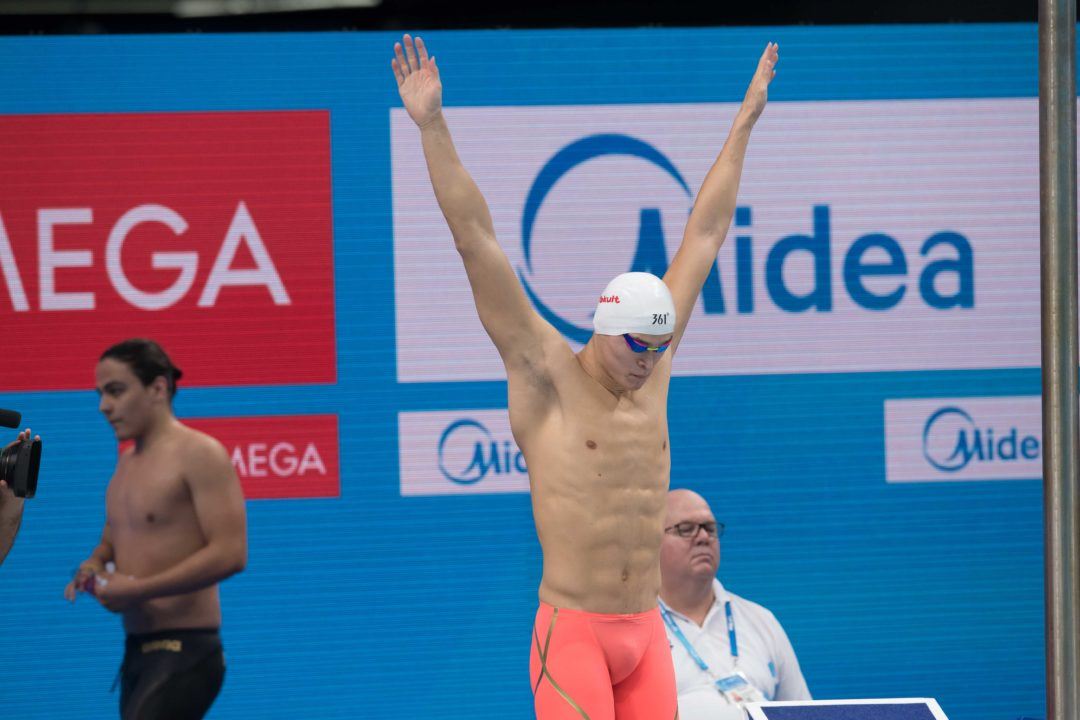 Chinese superstar Sun Yang captured his 3rd gold medal of these Chinese Nationals, beating the men’s 800m freestyle field by exactly 8 seconds. The 27-year-old multi-Olympic gold medalist got the job done tonight in a mark of 7:48.03, with his time tonight rendered .33 faster than the 7:48.36 he produced for gold in Jakarta last year at the 2018 Asian Games.

Sun inserts himself at the top of the world rankings, displacing former #1 Jack McLoughlin of Australia by just .01. Runner-up this evening was Ji Xinjie in 7:56.03, while Cheng Long rounded out the top 3 in 7:56.38.

Of note in Sun’s swim is the fact that his closing 100m was actually faster than his opening 100m, meaning the freestyle ace had more left in the tank. His first 100m checked in at a split time of 55.77, while Sun closed in a massive 54.40. Sun is still finding his rhythm in this race, but has made it clear he intends to take on at least the 200m/400m/800m treble in Tokyo at the 2020 Olympic Games. He is still entered in the 1500m free here, but we’ll see if he appears in his lane at the given time.

The women’s 200m free saw an explosive performance by 17-year-old Asian Games silver medalist Yang Junxuan. Yang powered her way ahead of semi-finalist leader Qiu Yuhan, and dynamic duo Li Bingjie and Wang Jianjiahe to take the 200m free title here in a mark of 1:56.98, the 4th fastest time in the world this season and the only sub-1:57 competitor in tonight’s race.

1500m freestyle winner here, Wang Jianjiahe, found herself in 6th place tonight in 1:57.84, about a second off her season-best of 1:56.70 from October’s Chinese Championships.

Wang has been as fast as 1:56.31 from last December, so he’s been consistent with his swims under the spotlight at major domestic competitions. The real test will be this summer in Gwangju, when he’ll see the likes of Chad Le Clos and Kristof Milak.

Yan Zibei got the job done once again in the men’s 50m breaststroke, tying his newly-minted Chinese National Record of 26.96 from last night’s semi-finals. His same time last night marked the first time the 23-year-old produced a sub-27 second outing, beating his previous personal best of 27.25.

Wang Lizhuo earned silver tonight in 27.29, while Shi Weijia also stepped onto the podium in 27.33.

2018 Asian Games gold medalist in the women’s 200m fly, Zhang Yufei, leads a tightly-packed field here at Qingdao Sports Center, holding just a .35 advantage over Zhou Yuqi. Zhang clocked 2:08.61 for lane 4 in tomorrow night’s final, while Zhou is right behind in 2:08.96. Also in the mix is Yu Liyan, who touched in 2:09.08 to flank Zhang as well.

Her time in Jakarta last year was 2:06.61, showing what the swimmer is capable of when it counts.

Crushing the leading time in the men’s 100m free semi-finals was He Junyi, as he threw down a massive 48.29, the fastest of his career. He had already impressed this year, becoming the 3rd fastest Chinese performer ever in the event with his mark of 48.84 from Shaoxing in January.

But, the 21-year-old managed to hack .55 off of that result to check-in now as the 2nd fastest Chinese performer ever in the event, sitting 2nd only to now-retired National Record holder Ning Zetao (47.65). He’s time also inserts itself into the top 10 performances all-time by Chinese swimmers as #9, the only non-Ning Zetao-named swimmer on the list.

The 100m backstroke gold medalist here, Fu Yuanhui, notched the fastest 50m back time of the night in the semi-final. She touched in 27.87 to lead Wang Xueer and Chen Jie who were both on the other side of 28 seconds in 28.15 and 28.36, respectively.

Fu has already been as fast as 27.69 from late last year, so she’s already within tenths of that time and ready to rock a new gold medal effort come tomorrow night’s final.

looks like she’s able to maintain a stronger kick over long distance, I was expecting a big improvement on her short distance. she looks a lot bigger, maybe that’s something she needs to adjust to.

is it not wild that at two separate meets, each with minimal competition, that the top two guys in the world in an almost 8-minute long race be 0.01 seconds apart?