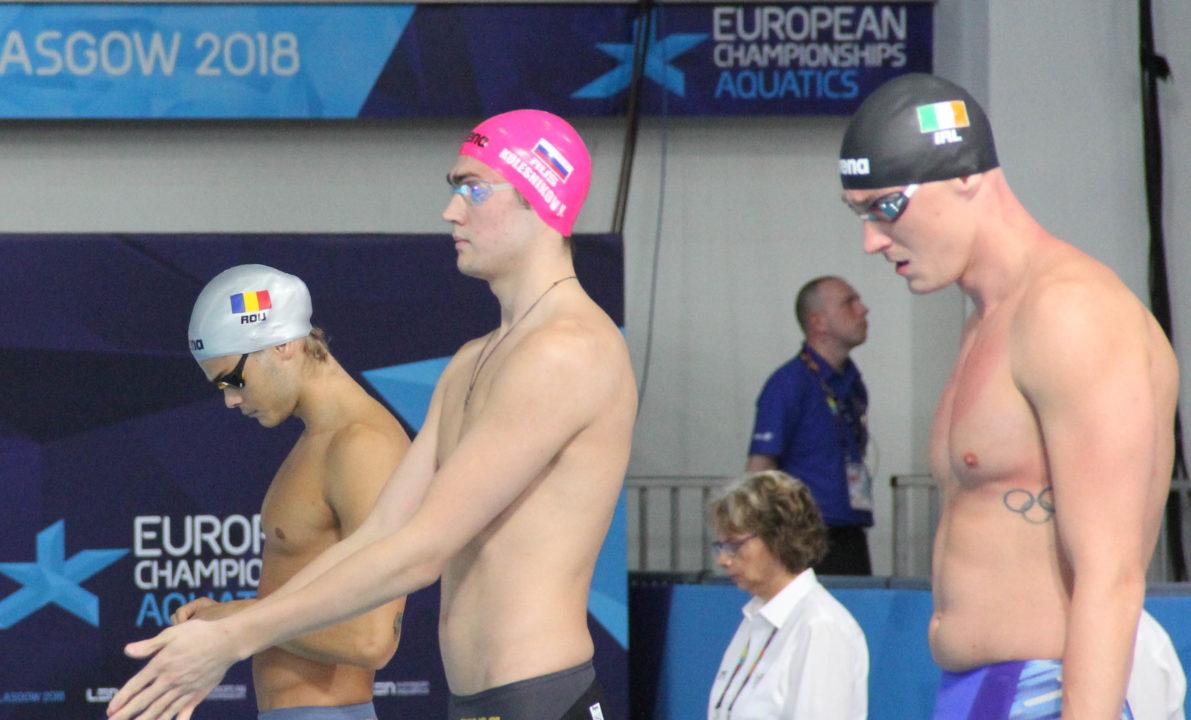 After Britain's breaststrokers suffered earlier in the meet, Russian backstroker Kliment Kolesnikov was the latest victim of the 2-per-country rule. Current photo via Giusy Cisale/swimswam.com

The two big stories coming out of Tuesday’s preliminary session at the 2018 European Aquatics Championships weren’t who advanced, but rather who didn’t.

In the men’s 200 backstroke, Russia, which we alluded they might in our preview, pounded the rest of the field, taking the top 3 qualifying spots (with 18-year old Maxim Stupin in 14th, just for good measure).

For Evgeny Rylov, the defending World Champion and European Record holder, to advance at the top seed is no stunning revelation, even coming off a shoulder injury. The next two placements, however, were more unlikely. Kolesnikov is the World Junior  Record holder in the event, still 18, and his best time is 1:55.14. Tarasevich, the oldest of the trio at just past his 23rd birthday, had a best time coming into the meet of 1:57.63: two-and-a-half seconds slower than Kolesnikov, and with a seed of just 14th.

Both swimmers have performed well at the meet, including a World Record for Kolesnikov in the 50 back, and so the most likely explanationn for the outcome is that one of the two, the more experienced Tarasevich, treated the prelim like it was: the biggest challenge he’d face in all 3 rounds of competition, because it was the only race where he’d have to beat out 2 Russians to be in the medal conversation rather than just 1.

The other notable absence from Tuesday’s semi-finals will be in the women’s 100 free where Dutchwoman Ranomi Kromowidjojo was a no-show in prelims. She was seeded 4th in the event in 52.78, which left her within a tenth of 2nd-seeded Pernille Blume by psych sheets.

Nobody showed much in prelims because nobody had to: none of the top contenders was seriously pushed by a countrymate, with Blume qualifying through 1st in 52.97.

Kromowidjojo told Dutch media that she was saving her energy for Wednesday’s 50 fly, where she thought she had a better chance at a medal (she’s the 2nd seed behind World Record holder Sarah Sjostrom), and she’s probably right. While the gaps in recent best times between Kromowidjojo and Bonnet and Blume in front of her were tiny, Blume has raced exceedingly-well this week thanks in part to an improved start, and Bonnet has been on fire all year long, carrying forward to this meet with already a title and Championship Record in the 200 free.

But, Kromowidjojo certainly was capable of a medal, and her absence puts a dent in one of the more competitive fields remaining at this meet.