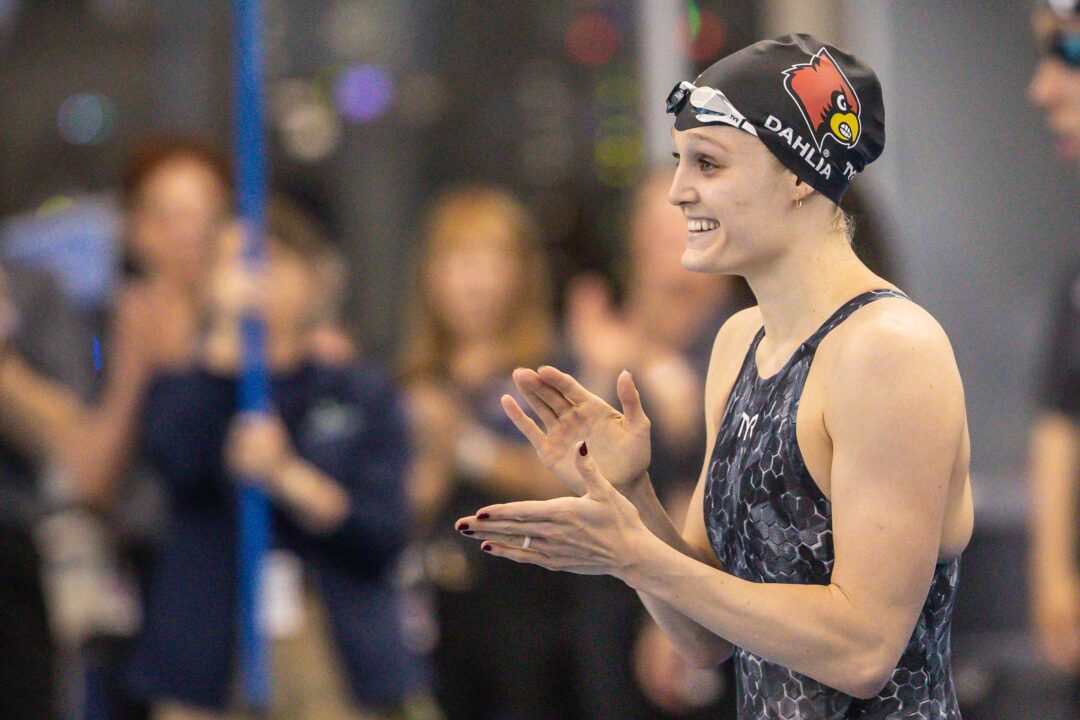 Olympian and world record holder Kelsi Dahlia announced that she and her husband Thomas are expecting their first child in late January. Archive photo via Jack Spitser/Spitser Photography

Olympian and world record holder Kelsi Worrell Dahlia has announced via Instagram that she is pregnant with her first child. On August 28th, she and her husband of five years, Thomas Dahlia, shared that their baby is expected to arrive in late January.

Dahlia has retired from competitive swimming since late May, about a month after the U.S. International Team Trials where she placed third in the 50 and 100 fly.

She is still found on the pool deck as the University of Notre Dame’s new associate coach.

Dahlia swam for the University of Louisville from 2012 to 2016. She excelled as a Cardinals swimmer by finishing in the top five in the 100-yard fly at the NCAA Championships all four years. She was also a nine-time conference champion individually.

She made a name for herself at the NCAA Championships in her junior year when she became the first woman in history to break the 50-second barrier in the 100 fly. Her fastest collegiate 100 fly time was 49.43, which she clocked in at the NCAAs in her senior year.

Dahlia’s dominance as a female college athlete was recognized during her senior year when she received the Honda Cup.

While Dahlia swam to podium finishes with some record-breaking performances, she also earned her bachelor’s in kinesiology and exercise science.

After graduating in 2016, she became a pro athlete and continued her training at Louisville. That summer, she secured her spot on her first Olympic team. She won a gold medal in the 400 medley relay at Rio.

Between the 2016 and 2018 Short Course World Championships, Dahlia accumulated 15 medals, 10 of which were gold.

In Hangzhou in 2018, she was proclaimed the most decorated athlete of the meet. She won seven gold medals of the nine total she earned, including an individual world title in the 100 fly.

Since the International Swimming League (ISL) launch in 2019, Dahlia became a member of the Cali Condors.

Dahlia broke the women’s SCM 100 fly world record at the ISL Finale in December 2021 with a time of 54.59. She remains the world record holder in that event.

Kelsi and Thomas met each other on the Louisville swim team. Thomas had a successful collegiate career himself when he placed 8th in the 100 breast at the NCAA Championships during his redshirt senior year. He was also a three-time individual conference champion in the 100 and 200 breast.

Doesn’t she also have a wr in the medley relay from 2019?