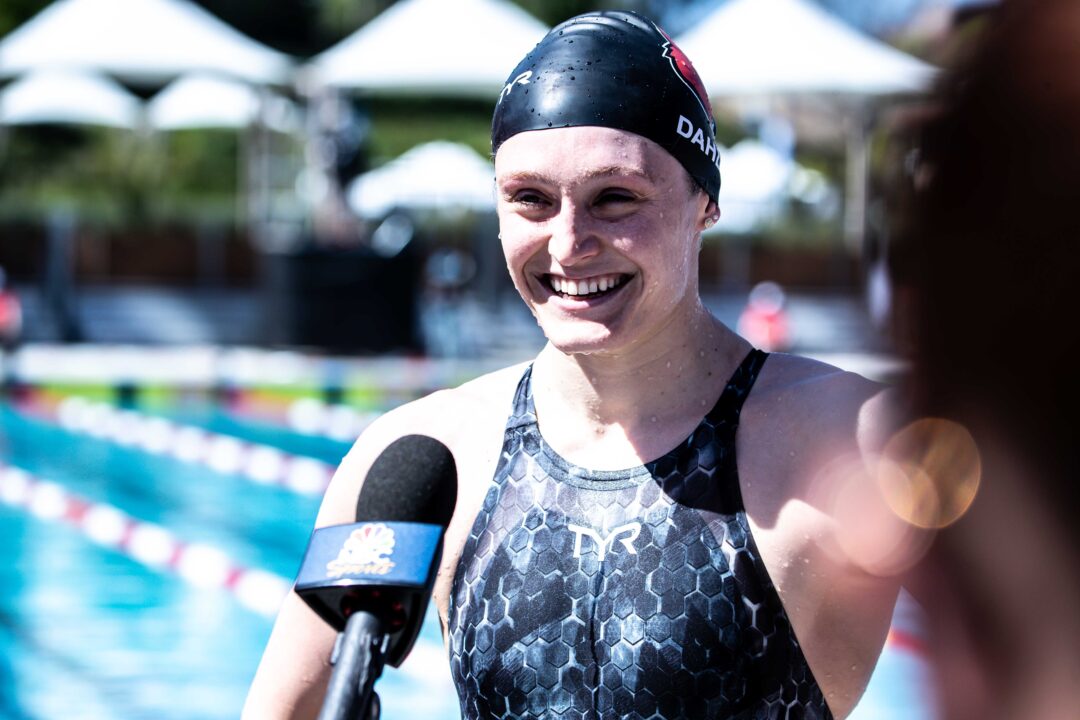 Just days after announcing her retirement from competitive swimming, Kelsi Dahlia has been named the new associate coach at the University of Notre Dame.

Dahlia joins the staff currently being built by former Louisville associate Chris Lindauer, who was announced as the new head coach of the Fighting Irish in April.

Dahlia joins the Irish after an illustrious collegiate and professional swimming career!

A spokesperson for the program says that they are defining associate coach as a notch above assistant coach, but not the same as an “associate head coach.”

Dahlia, a multi-time NCAA champion during her swimming career at the University of Louisville, is familiar with both Lindauer and another new colleague, Kameron Chastain, who was named an associate at UND on Wednesday after seven seasons with the Cardinals as an assistant coach.

“However, she will be most impactful to our program because of the person she is. Kelsi brings compassion, love, and a humble heart to our program that will help teach and set an example for our student-athletes on how to pursue being an elite student-athlete in the classroom and in the pool.

“This is one of the most impactful hires in program history and I’m so excited to welcome Kelsi and Thomas to our Notre Dame family. Go Irish!”

Dahlia had an illustrious four-year career at the University of Louisville from 2012 until 2016, highlighted by winning back-to-back NCAA titles in the women’s 100 and 200 butterfly in her junior and senior seasons.

“I’m very thankful to Chris and the administration at Notre Dame for the opportunity and honor of coaching at this historic university,” said Dahlia.

“I’m so grateful for the lessons I’ve learned as a swimmer, and I couldn’t be more thrilled to take those experiences into this coaching role. I’m looking forward to supporting the student-athletes at the highest level, both academically and athletically. I am so excited to support the lofty goals the team sets and will fight together to accomplish!”

She was also a nine-time conference champion individually, and was the first woman to break the 50-second barrier in the 100-yard fly, clocking 49.89 in the prelims at the 2015 NCAAs. After re-lowering the U.S. Open, NCAA and American Records down to 49.81 in the final, Dahlia re-broke the record the following year in 49.43, a time which stood up as the fastest ever for nearly three years.

After concluding her collegiate career in March of 2016, Dahlia had an exceptional six years as a professional, including qualifying for the U.S. Olympic team in 2016 and winning a gold medal as a prelim member of the American women’s 400 medley relay.

The now-27-year-old went on to win four relay gold medals and an individual bronze in the 100 fly at the 2017 World Championships in Budapest, and added one gold and two relay silvers at the 2019 edition in Gwangju.

Dahlia also accumulated a staggering 15 medals from the Short Course World Championships, all in either 2016 or 2018, 10 of them being gold. In Hangzhou in 2018, she won seven gold medals, including an individual world title in the 100 fly.

Dahlia is the current world record holder in the SCM women’s 100 butterfly, having clocked a time of 54.59 during the International Swimming League (ISL) Finale in December 2021.

She announced her retirement from competitive swimming on Saturday coming off a pair of third-place finishes at the U.S. International Team Trials in the women’s 50 and 100 fly.

Guess I should’ve been faster at swimming rather than develop ncaa athletes and hs all Americans for the last 17+ years. Who would’ve thought that’s all it took?

Congrats to her, slap in the face of the coaches with years of experience trying to crack into the college coaching realm.

Swimming at a high level and coaching are both art forms, but different ones at that. While I don’t think coaches need to be in a place for dozens of years to build up experience, I do believe in learning and earning your way up.

I’d be curious to hear more about your experiences. Would you be willing to email me braden@SwimSwam.com so I could ask you a few questions?

It’s incredible that people that apparently are involved with swimming/sports (taking time to comment in this website) can’t seem to understand that being an athlete at the level Kelsi was is plenty of “experience”, very few coaches out there have the experience she has had as an athlete which will now more then ever be relevant for a coach to have, her recent experiences as an athlete, mental toughness, been there done that mentality, and ability to relate to athletes are just a few aspects an “experienced” coach most likely won’t have. Look at Margo!

Happy for her but super crappy for all the people who held down the fort at Notre Dame while they were without permanent head coaches and lead to believe they would all still have jobs.

Any assistant swim coach who is convinced that they will still have a job when a new head coach comes in is naive at best. The instances where this happens, especially at Power 5 programs, are very few and very far between.

Gee. Two women who have little coaching experience (Dahlia and Geer) are the punching bags of the misogyny crowd who apparently have a problem with world class female swimmers being hired as top coaches yet saying nothing about the past 30-50 years of male former swimmers with no experience who scored college coaching jobs with no experience. What is the difference in this picture?. Gender.

I feel for every coach who reached out to try to move from the mid majors to a Power 5.
No coaching experience?

It is Notre Dame though so the expectations mixed with the lack luster hiring of actual coaches seems about right.

Mid-Major? Louisville? They are in the ACC

Yes, so going to ACC is a move from mid major to Power 5. Trying to move up the coaching ladder.

What is the distinction between an associate coach and an assistant coach?

If it’s the same as college basketball, assistant coach is higher on the coaching chain. Associate coach seems to be the entry level position for newbies.

other way around friend

Flip flop that, associate is higher on the food chain than an assistant.

Notre Dame clarified for us – in their structure, “associate coach” is above assistant coach, but she is not an “associate head coach.”

If there is no associate head coach, usually assistant coaches are seen as #2 and associates are usually the next level down.

Notre Dame clarified for us – in their structure, “associate coach” is above assistant coach, but she is not an “associate head coach.”

A great hire! Not just from a notoriety standpoint, but what she brings to spark and enrich the culture at ND! Looking forward to seeing Lindauer, Chastain, and Dahlia work hard for the Fighting Irish!