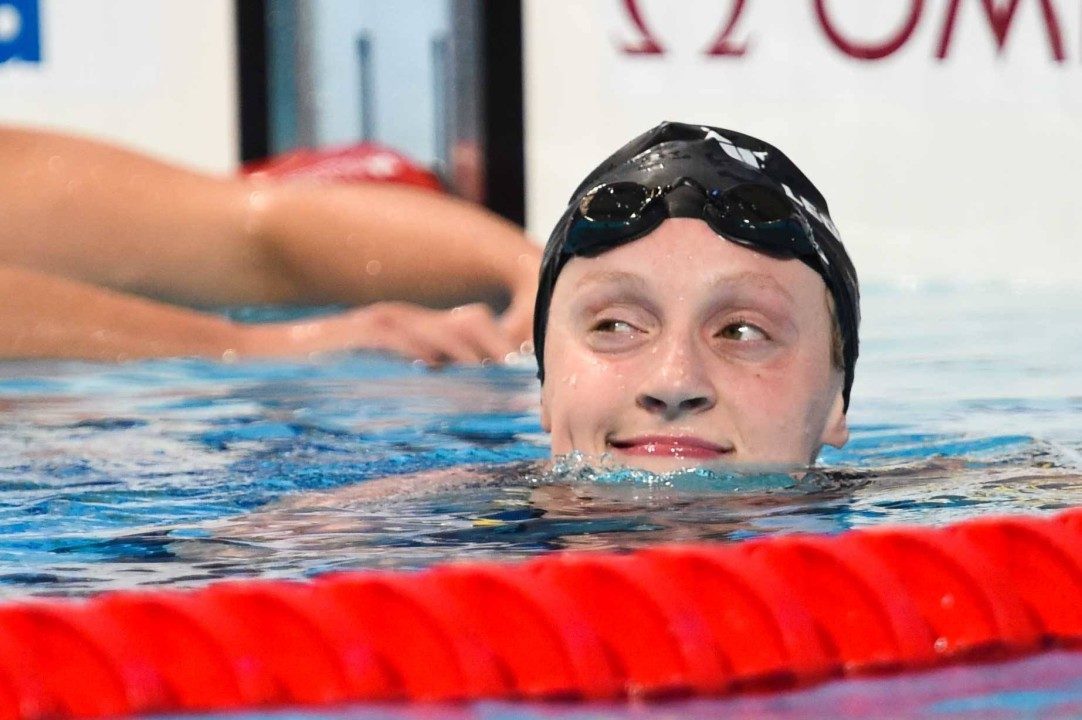 Katie Ledecky is in the running for the United States Olympic Committee's Sportswoman of the Year Award. Archive photo via Mike Lewis/Ola Vista Photography

The United States Olympic Committee has announced its Team USA Awards finalists for the 2014-15 time span. The honors, which were conceived back in 1974, are presented across several categories aimed at recognizing the outstanding achievements of Team USA athletes year round.

The categories for the Team USA Awards are as follows:

The USOC nominating committee selected the top 5 finalists in the individual categories among “Best of the Month” honorees throughout the past year. Fan voting will comprise 50% of the final tally, while the members of the Olympic and Paralympic organizations, including ‘an esteemed panel of Olympic and Paralympic journalists’ will account for the other 50%.

Michael Phelps and Natalie Coughlin are just two of the swimmers who have received the Olympic Athlete of the Year award in the past, and another legendary aquatic athlete has a chance to snag the title at this year’s ceremony. Katie Ledecky could potentially win the USOC Sportswoman of the Year award for a second time, having already earned the honor in 2013.

Ledecky made history at this summer’s World Championships, where she became the first female to sweep 4 freestyle events at an international competition, while also scoring three new world records. Before the meet was over, Ledecky would nab another gold as part of the women’s 800m freestyle relay, and score the “Female Swimmer of the Meet” award for her amazing efforts.

Ledecky is up against gymnast Simone Biles, wrestler Adeline Gray, triathlete Gwen Jorgensen, and tennis star Serena Williams. The awards will be announced during the Team USA Awards ceremony held on December 10th at the University of Pennsylvania’s Houston Hall. The show will be televised on NBCSN on December 27th from 3-4pm Eastern.

Fans are invited to vote for their favorite athletes and teams at TeamUSA.org/Awards through Friday, Nov. 20.

I should hope so! Who could be more deserving on this planet?

Her category is very competitive, if base on the popularity, I think Biles will win it.

Serena Williams has a good case herself.

In most years, Serena has a good case, but you had to do something transcendent in 2015 to be top female and 3 slams has been done by 7 other women before Serena. Biles, Jorgenson, and Ledecky can both make a case for having one of the 10 greatest sporting competitions regardless by a woman across all sports and years.

Wow. Very tough.
Ledecky’s category is insane. All nominees have been amazing this year. I don’t know very well wrestling so I can’t talk about Adeline Gray but Simone, Serena and Gwen have been absolutely dominant. 4 golds for Simone Biles at last worlds. 3 grand slams for Serena. I don’t still understand how she lost the 4th but that’s another debate. And Gwen Jorgensen has not lost a triathlon world cup this year. She looks unbeatable.
I would have voted Serena for that award and more generally for women’s athlete of the year if she had made the Grand Slam.
No Grand Slam, I vote for Katie Ledecky who has been amazing at worlds and has made history.

If Williams won the US Open, all award will go to her, but she hasn’t, all award are debating right now.