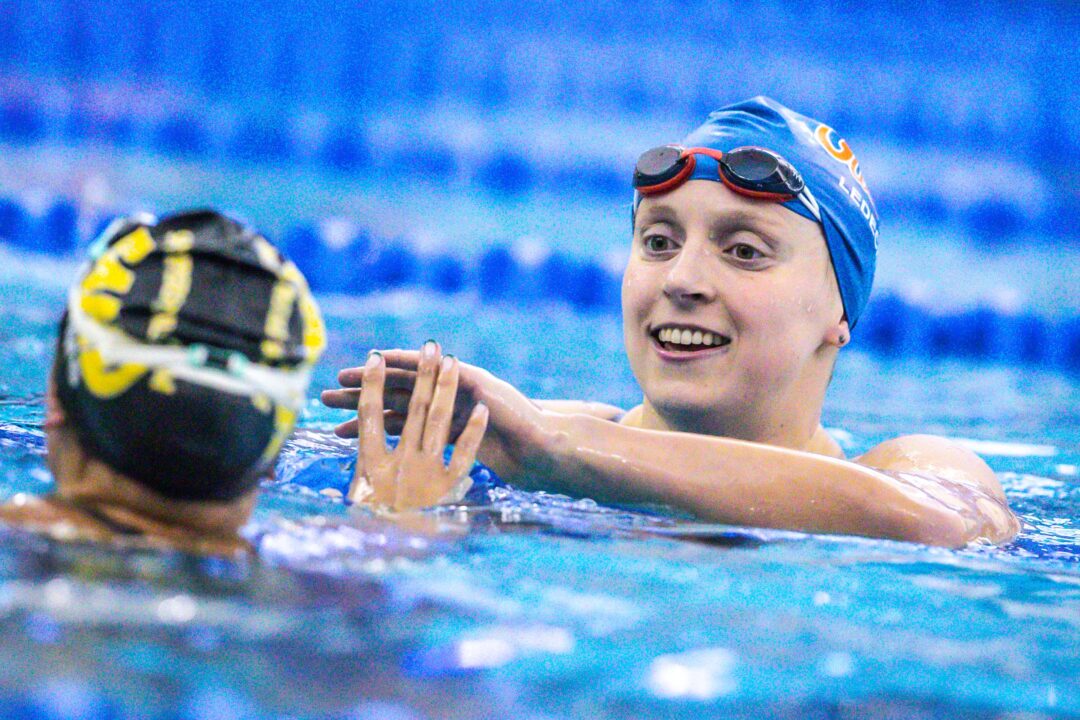 Ledecky did not have any events scheduled for Friday or Saturday when she has confirmed to SwimSwam that she will be time trialing the 200 fly and 200 IM. Archive photo via Jack Spitser/Spitser Photography

After winning the 800 freestyle on night 1 of US Nationals, Katie Ledecky mentioned in her post-race interview that she planned to time trial some fun races later in the meet. Ledecky later confirmed to SwimSwam that she will be time trialing the 200 butterfly and 200 IM after Friday and Saturday’s prelims sessions.

Ledecky scratched the 100 freestyle on day 1 instead opting to focus on the 800 freestyle in finals where she captured another national title leading from start to finish. She is scheduled to race the 200 free on day 2 and the 400 IM on day 3. Her time trials on Friday and Saturday will be her only events of the day.

The 25 year old hasn’t swum the 200 long course meter (LCM) butterfly since 2014 when she was only 17 years old. She swam a 2:15.62 at the Virginia LC State Championships which was also a personal best time.

Time trialing both events is the only option Ledecky has to compete in them as she has not competed in either event during the qualifying period for the meet. The qualifying period for the meet began July 1, 2021. This will also be the first time Ledecky will swim either event since moving from Stanford to Florida for training back in September 2021.

The GOAT has pleasantly surprised me in many ways since 2021.

kind of random place to drop this, and maybe i missed something, but I’m surprised I haven’t seen any stories or comments about weyant transferring to Florida

I’m surprised you haven’t seen any stories or comments about Emma Weyant transferring to Florida too.

You mean beyond the stories and comments about Weyant transferring to Florida???

She is the Queen, she can do anything. Honestly, I think with her strength, endurance and metronomic stroke I feel she will do well in the fly. She’ll definitely swim a pb.

would be fun to see her and Katinka race every event

Ledecky just singehandedly recussitated Friday and Saturday ticket sales. Any swim fans within a 200mile radius may want to drive out to see this.