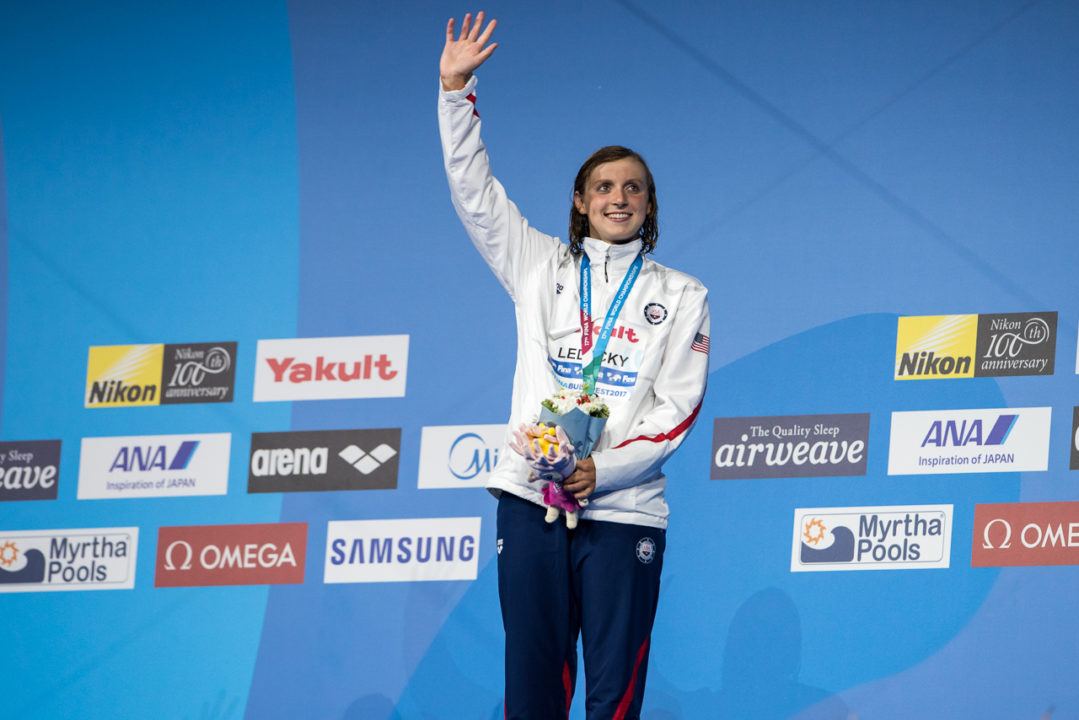 Ledecky announced last week that she is turning pro, and now has signed with sports agent Dan Levy of Wasserman. Archive photo via Peter Sukenik/www.petersukenik.com

Katie Ledecky announced her decision to turn pro and forgo her final two years of collegiate eligibility last Monday, meaning that she will be in the market for sponsor deals in the near future.

Ledecky has taken the first step in that direction, signing with Wasserman Senior Vice President of Olympic and Women’s Sports, Dan Levy.

Wasserman Chairman/CEO Casey Wasserman was behind the LA2024 (now 2028) push as the Chair of LA2024. Janet Evans, who is often tied to Ledecky through their distance swimming prowess and tenures at Stanford, worked closely with Wasserman on the bid. However, Evans is not represented by Wasserman’s company and is instead with Chicago Sports and Entertainment Partners.

“It’s rare that an athlete turns pro and they have a business on Day 1,” Levy said in an interview with the Washington Post. “We feel we have the luxury — and Katie feels this way, too — in being very strategic and trying to put together a plan first and then find the right partner companies that fit what she wants to do moving forward.”

Likely, Levy and Ledecky will aim to leverage long-term deals — perhaps ones that would run through not only Toyko 2020, but Paris 2024 as well.

“My goal when it comes to endorsements is to take a balanced approach to my business,” Ledecky said. “I will be seeking the support of sponsors who understand my commitment to training, to my education and to my growth as a person. I also am excited to work with people and companies who understand that they are also investing in my journey to have success in the pool.”

Because she has already been so successful on the international stage, Ledecky is in a fairly unique position to leverage her talent to be in full control in the negotiation process.

“She’s accomplished so much prior to turning professional that she is in a position to influence a lot of the decisions that will be made going forward,” Levy said. “Whereas if she was another athlete just turning pro, sometimes you have to compromise a little bit more just to earn a living.”

Both Levy and Ledecky stressed that they will be cautious in making sure that her out-of-pool obligations do not hinder her performance in it.

“We understand that the swimming is the most important thing, and that’s the platform that everything builds from,” Levy said.

By turning pro with two years left in the Olympic cycle, Ledecky gives herself time to adjust to whatever those outside obligations might entail. She also noted that in 2016, though she was still an amateur, she did have commitments outside of practice and racing.

“I also have been able to observe what has worked for other professional athletes, and the support that I have received from family and friends is crucial,” Ledecky said.

As for the brands she’ll represent? Levy is confident that Ledecky’s fame will bring her endorsements outside of the swimming world as well as the big ones in it.

“Katie’s such a smart and thoughtful person. You combine that with her excellence in the pool, and you just get an incredible force. I think we are always excited to work with women who are really committed to making a positive impact on the next generation as well,” Levy said. “There’s no question that Katie already transcends the sport of swimming.”

Given the connections between Wasserman and the LA Olymipcs — I wonder if there’s any hope that Ledecky would still be swimming and could make the team in 2028. This article mentions looking for longterm sponsors that would carry her through Paris 2024. She’ll be 27 in Paris and that would be her 4th Games. Seems like LA 2028 would be a stretch — she’ll be 31. But if there’s anyone that could lose ground on her competitors and still make the team, if would be Ledecky.

By 31, she will be definitely past her prime, but we all know that she is so far ahead, that she could still win in the 400, 800, and 1500. It will be exciting to see what she will do later in her career. Will she break more world records? Because her hard studying at Stanford I’m sure isn’t easy as well as the training. She seems like she’s more focused on school than swimming. Which is good. She’s so far ahead in the world, and there will come a day when retires. I don’t know if we can expect a world record or two in 2020. Maybe after 2020.

Women’s distance swimming in 2028 will be so much deeper and more advanced than today. Ledecky will be a distant memory.

Too much Happy Adjusting going on recently. Rio was always going to be Katie’s peak. Schoolwork has nothing to do with the lack of world records. They won’t be happening in 2020 or beyond, not at the major distances.

You getting softer with your predictions. Just recently you wrote that nothing will happening even before 2020. So you are giving Katie a two years window now. Very generous. Such a position is very convenient: if she breaks some records or makes some other type of significant achievement then everybody will be happy and nobody will care about some negative concerns along the way that hasn’t realized. If there is no substantial progress with whatever she undertakes then the people like you will immediately raise your voice: remember? I told you that. I’ve foreseen that to happen. You haven’t answer my question last time and probably won’t do it again: what world records of Katie Ledecky will satisfy you: 8min… Read more »

Says who? Who knows how much knowledge and training can progress? Go ask Dara Torres. Go ask Roger Bannister. Stop with the limits, please. I went my best time in the 100 yard breast at 46 and I was no slouch in college. Katie has already shown she can break barriers that seemed FAR, FAR off.

Its crazy to think that Paris 2024 and even LA 2028, we will have a totally new batch of olympians that will shock us just as much as these current national teamers do.

Not crazy at all.