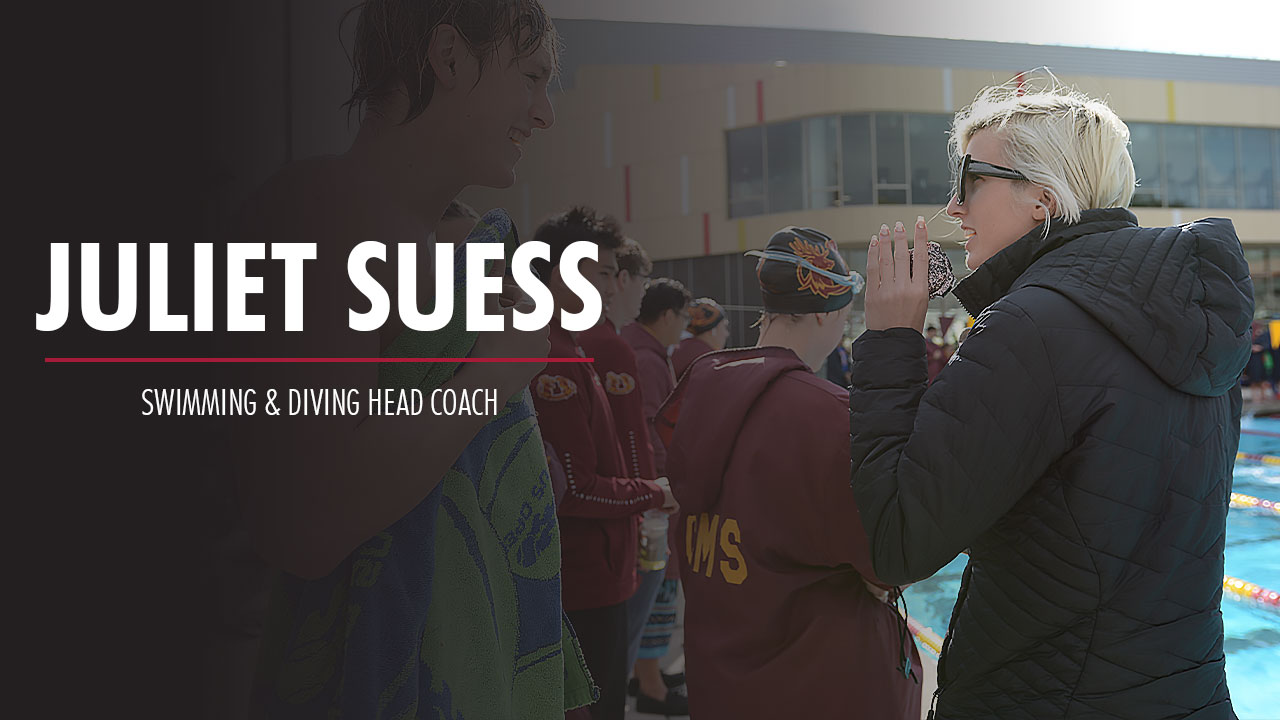 Suess has plenty of SCIAC experience, competing on the Occidental College swim team prior to coaching at Claremont-Mudd-Scripps. Current photo via Chapman Athletics

“When I stepped on Chapman’s pool deck for the first time four years ago, I was awed by the facilities,” commented Suess. “I knew at that moment that working for Chapman was my dream job, and I am honored to be in the position now to make that a reality.”

Suess brings plenty of SCIAC experience to Chapman as a student-athlete and coach. They had a successful career on the Occidental College swim team and went on to coach at Claremont-Mudd-Scripps, helping the Stags and Athenas to multiple SCIAC championships.

“We are thrilled to welcome Juliet to Chapman as our next swimming & diving Head Coach,” commented Director of Athletics Terry Boesel. “We had a tremendous response and very talented pool of candidates. Juliet emerged as our top choice with some big goals and aspirations for our programs and is the perfect fit to propel us into the next chapter.”

At Occidental, Suess was a team captain and five-time All-SCIAC swimmer. As a freshman in 2011, they won the 200 freestyle title at the SCIAC Championships. They were All-SCIAC in the 200 free in 2013 and a member of three All-SCIAC relays in the course of their career. They also broke multiple school records.

As a Fullbright Scholar, Suess spent nine months in Germany upon graduating from Occidental. They returned to the United States and began their coaching career at Oxy as an assistant coach for the 2015-16 season. They helped the men’s and women’s team break 10 combined school records that year while also taking on a recruiting role.

In the fall of 2016, Suess moved to Claremont-Mudd-Scripps as the Recruiting Coordinator and Assistant Coach. While at CMS, they recruited several SCIAC champions and an eventual NCAA Division III champion as well as multiple swimmers that became All-Americans. They were a part of two SCIAC Team Championships for the Athenas and three for the Stags.

After the 2017-18 season, Suess accepted a job as an English and Communications teacher at Harvard-Westlake but continued to coach at CMS and eventually earned their Master’s from the Claremont Graduate School in English. They moved to The Buckley School in 2021 as an English teacher and Head Swim Coach.

Suess received the Jean Freeman Scholarship in 2018 to attend the College Swim Coaches Association of America’s annual convention and Coach Academy – given annually to just six assistant coaches across the nation and all divisions of collegiate swimming.

“We feel very fortunate to have Juliet begin this new era of swimming and diving at Chapman,” said Associate Athletics Director and swimming & diving sport administrator Doug Aiken. “Juliet has a Division III and SCIAC-championship pedigree, a proven ability to recruit, and a deep understanding of what our student-athletes need to be successful in and out of the water.”

Suess added, “My favorite memories of coaching revolve around swimmers achieving more than they ever thought possible: looking up at the clock and seeing a time they dreamed of, waving around a paper with a grade they thought was out of reach, or getting an internship at their favorite business. I’ve been amazed watching what Chapman has achieved from the sidelines, and I am excited to see what new heights we can reach as a team – sky’s the limit with this team!”