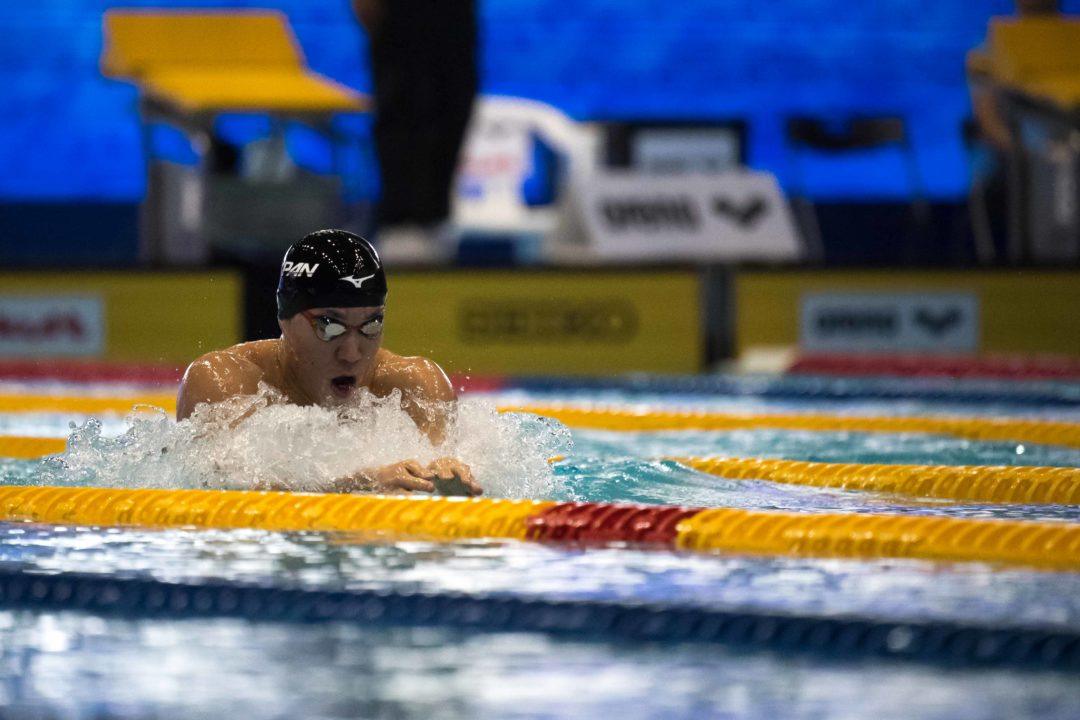 16-year-old Miyu Namba produced yet another personal best en route to gold to kick-off her Japan Open campaign, winning the women’s 400m free in a mark of 4:08.37. That time represents the teen’s first-ever performance under the 4:09 mark, with her previous lifetime best marked by the 4:09.39 she put up in April to take the Japan Swim title.

Behind Namba both in April and tonight was well was Chihiro Igarashi, who fought all the way to the end to wind up only .08 out of gold with a runner-up time of 4:08.45.

Rounding out the top 3 was Waka Kobori, who also dipped under the 4:09 mark with a super solid 4:08.70. Prior to this meet Kobori’s PB rested at the 4:09.04 she produced for 6th place at last year’s Pan Pacific Championships.

Igarashi is already on the list of all-time Japanese performers in the women’s 400m free with her 4:07.52 time from the 2016 Olympic Games, while Namba and Kobori now enter the list in slots number 5 and 6, respectively. To boot, Namba’s mark now checks-in as the Japanese National High School Record.

Although the women fell short of the 4:05.89 QT needed for Gwangju, the fact that the trio challenged one another to personal bests is a promising sign for more time drops to come.

Runner-up this evening was a pair of swimmers who tied in Yukina Hirayama and Masako Kuroki, each hitting the wall in marks of 26.33.

The event is sorely missing national record holder Rikako Ikee, the 18-year-old Pan Pacific champion and 2018 Asian Games MVP who was diagnosed with leukemia earlier this year. The teen continues to fight and still has Tokyo 2020 in her sights.

Roaring to the wall within striking distance of the 23.00 QT needed for Gwangju in the men’s 50m fly was Kengo Ida, the reigning Japanese national record holder in this event. Taking gold tonight in 23.42, Ida’s time checked-in just .15 shy of the 23.27 national record he produced for gold at the 1st World Championships qualifying meet, the Japan Swim back in April.

Runner-up status tonight went to visiting Singaporean swimmer Joseph Schooling, who held the top seed from the morning with his mark of 23.72 and managed to slash another .22 to come up with the silver in 23.50. That is only .02 away from the 23.48 he produced as a season-best en route to topping the podium at the Singapore National Age Group Championships back in March.

Japanese national record holder in the 50m free, Shinri Shioura, blasted a big-time personal best tonight in this event, nailing a mark of 23.62 to round out the top 3 and give us an indication of where the 27-year-old’s speed is at for this meet. He, along with domestic rival Katsumi Nakamura, are both still seeking individual event qualification for Gwangju in the 50m free.

As a reminder, 19-year-old Hungarian Kristof Milak, one of the newest swimmers to be named to ISL Team Iron, finished all the way back in 13th in this event out of the heats with a modest time of 24.28 to kick-off his Japanese campaign.

With Seto having already collected Gwangju qualification in this event from the Japan Swim, paired with the fact that reigning Olympic champion Kosuke Hagino has opted out of this meet, the men’s 400m IM was anybody’s race tonight in Tokyo.

Yuuki Ikari made it happen, punching the wall in a time of 4:13.59 to render the 2nd fastest time of his career. His outing this evening fell just .04 shy of the 4:13.54 he threw down at the Japan Swim, an outing that inserted him at #9 on the list of all-time Japanese performers in the event.

Ippei Miyamoto clocked a silver medal-worthy effort this evening of 4:17.53, while Takeharu Fujimori was right behind in 4:17.88 for the bronze.

The men were chasing a 4:13.09 QT for this summer’s World Championships to join Seto in representing Japan in the event, so Ikari was painstakingly short of the necessary mark.

In our first real upset of the night, Katsuhiro Matsumoto beat out reigning national record holder Katsumi Nakamura for gold in the men’s 100m freestyle.

Matsumoto’s PB entering this meet was the 48.71 he produced at the Japan Swim in April for  Most recently at the 1st qualifying meet in April, the 22-year-old fired off a time of 48.71 for bronze. Prior to that his best outing was marked by the 48.81 thrown down the year before.

Tonight however, the man who has already qualified for Gwangju in the 200m free fired off a new lifetime best of 48.52 to take the meet title and enter his name in the mix for the men’s 4x100m freestyle relay.

A mark of 48.11 is what was needed to qualify individually in this event for Gwangju, so the top trio fell short of that threshold.

Finally hitting our first World Championships-qualifying time was Reona Aoki, who clinched a Gwangju berth with her winning mark of 1:06.44 in the women’s 100m breaststroke. Hitting the wall to open in 31.08, Aoki closed in 35.36 to hold on and clear the stiff 1:06.48 minimum consideration time set by the Japanese Swimming Federation.

28-year-old Satomi Suzuki, two-time Olympic medalist  in the individual breaststroke events at the 2012 Olympic Games in London, was also under 1:07 to collect silver in 1:06.81. That was within range of her 1:06.40 time that earned her Asian Games gold last year in Jakarta.

Kanako Watanabe was in the mix tonight as well, finishing with a time of 1:07.09 to earn bronze.

Aoki’s previous season-best was represented by the 1:06.86 she fired off at the Konami Open meet this past February. However, her time this evening now rockets her into the top 5 performers in the world at slot #4, while Suzuki moves into the 7th position ahead of Russia’s Yuilya Efimova.

After establishing himself as the 2nd seeded swimmer already from the heats with a new personal best of 1:00.14, 25-year-old Seto fired off his first-ever sub-minute 100m breaststroke time of 59.79 to finish with the silver. Splits for Seto include a 28.18 opener, while the 400m IM Olympic bronze medalist closed in 31.61.

Along with his 200m fly World Record, Seto is an accomplished IMer as well, owning the aforementioned Olympic bronze from Rio, but also holding the 400m IM bronze from last year’s Pan Pacific Championships. He’s already fired off a big-time 1:56.69 200m IM from the Japan Swim in April, a time which renders the Japanese star as the 3rd ranked swimmer in the world right now.

Winning the 100m breast final tonight ahead of Seto was two-time Pan Pacs champion Yasuhiro Koseki. The 27-year-old bronze medalist from last year’s Short Course World Championships  finally dipped under the 59.38 QT for Gwangju after having missed the mark at the first qualifying meet.

Kosek is now ranked 5th in the world with his 59.12 performance tonight.

Koseki is zooming too, albeit this is his event