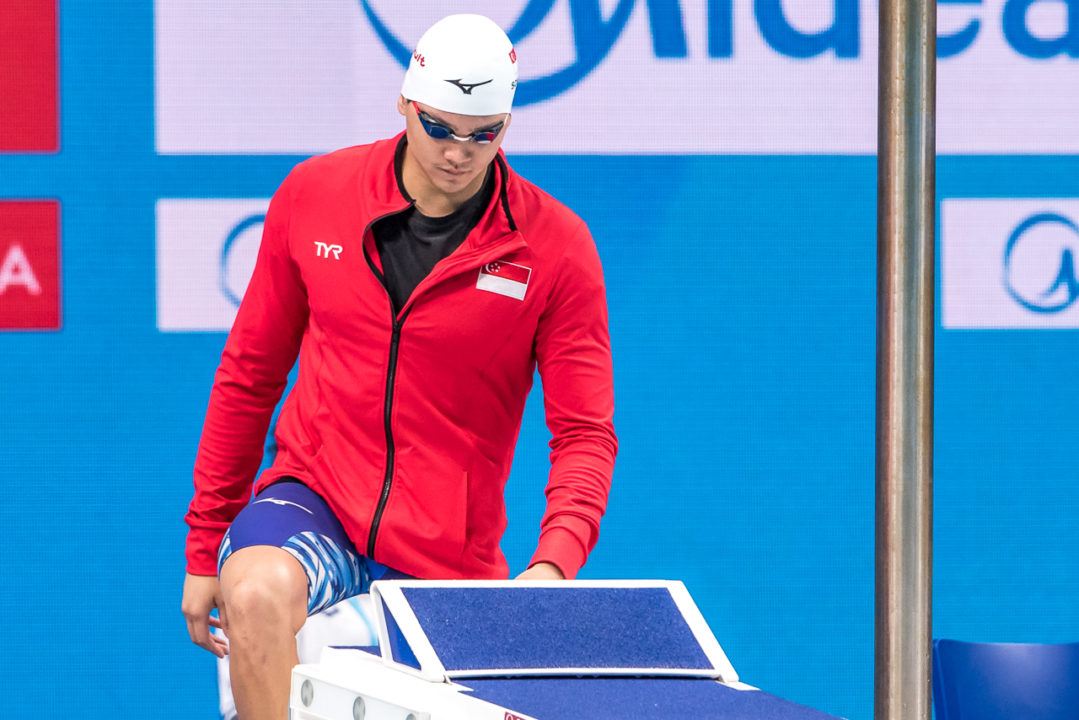 Joseph Schooling made two finals for night 1 of the 2019 Japan Open, whereas his fly rival Kristof Milak of Hungary wasn't as fortunate. Archive photo via Peter Sukenik/www.petersukenik.com

Day 1 of the 2019 Japan Open kicked off this morning in Tokyo, with several big guns wasting no time getting wet to get the action underway. As a reminder, this 4-day competition represents the final opportunity for Japanese swimmers to punch their ticket to this summer’s World Championships if they haven’t already done so at the Japan Swim this past April.

Among the Japanese, however, are several visiting swimmers from Singapore, Korea and Hungary. Per our meet preview, this means that Olympic champion Joseph Schooling is set to clash not only with home country master Daiya Seto in the 100m and 200m fly, but also Hungary’s Kristof Milak in those fly events, plus the 50m.

However, the 50m fly that happened in today’s heats was essentially a non-event between Schooling and Milak, as the former Longhorn reaped the top seed in 23.72, with Hungarian far behind.

19-year-old Milak, one of the newest swimmers to be named to ISL Team Iron, finished all the way back in 13th with a modest time of 24.28 to kick-off his Japanese campaign.

For Schooling, he’s been as fast as 23.48 this year en route to gold at the Singapore National Age Group Championships in March. That time remains in the top 20 performances of the season. Milak’s personal best in the 50m fly rests at the 23.72 he earned for bronze at the 2017 World Junior Championships, although he hasn’t raced the event since 23.82 at last year’s European Junior Championships.

Both Schooling and Milak doubled up with the 100m free this morning as well, with Schooling making his 2nd final. Schooling touched in 49.77 to be positioned 5th after the prelims, while Milak found himself in 28th after the heats with his morning mark of 51.08.

For the Japanese swimmers in the pool this morning, Naoki Mizunuma finished with the highest seed in the 50m fly with his 23.86 to flank Schooling, while national record holder Katsumi Nakamura is aiming for 100m free World Championships qualification with the top seed in a time of 49.53.

Of note, 200m breaststroke World Record holder Ippei Watanabe was uncharacteristically in the men’s 100m free field this morning, hitting the wall in 49.80 to snag the top seed. He’ll most likely drop this final to focus on the 100m breast sprint. The men’s 100m breast heats are still in progress as of publishing.

16-year-old Miyu Namba swam the 400m free race of her life at the Japan Swim in April, earning a big-time PB of 4:09.39 to beat out favorite Chihiro Igarashi. The teen leads the veteran again heading into tonight’s final, with the women clocking respective morning efforts of 4:12.12 and 4:12.77, with Chinatsu Sato right in the mix with 4:12.92 as the 3rd seeded swimmer in this women’s 400m free.

Love Schooling repping every sponsor but Speedo in this picture

Not surprising since he’s more of a 200 swimmer. Doesn’t do as well in the 50 sprints, but it’s a decent timing. He’ll be dangerous in the 200s.

Will be interesting to see the three butterfliers battle it out in the 100 and 200 fly. With just under two months to go before World Championships, this will be a benchmark.

49.8 for a breaststroker is impressive. Particularly one who isn’t great at the 100m breast (best I can find for him is a 1:00.3, but it’s hard to believe he’s been 2:06 in the 200m without also having been :59 in the 100m). Only other person I know of off the top of my head who can break :50 in the free while still putting up world class breaststroke times is Michael Andrew.

Any other breaststrokers that can throw down in the free? Dressel could be considered equivalent, as a freestyler who can fake the 100 breaststroke decently well (assuming that his 1:01.2 was not fully rested and that he could therefore push the minute mark if tapered).

Considering Andrew Seliskar is the NCAA champ in both the 200 free and 200 breast, probably.

Yeah, I had forgotten about him. Watching his races, his pullouts are insane, so I’m not sure his long course races would match up so well. We’ll see what happens this summer since he’s having a great year so far, but this is probably also the reason why he hasn’t been 1:57 or better in the IM.

Peaty swam a 200 free a couple of years ago that wasn’t disgraceful, but safe to say his breast is better than his free.

On the opposite end of the scale, I have a cousin who used to be a promising breaststroker. She had PBs of 1:08 and 2:27 (back in 2010) in breast, but never went better than 59-high in the 100 free with a quite marvellous Shields-piano impression in the last 15-20 metres.

What kind of IMer is Watanabe? One would think as a 49.8 freestyler that he’d at least be a moderately good flyer. And given how much better his 200 breast is than his 100 breast, one would think he’d have the endurance for the IM. Unless is backstroke is abysmal, he really ought to be trying his hand at the IM more. I vaguely recall seeing some sort of 200 SCM IM time on him once, but it would seem he’s only scratched the surface there.

He has, but he can’t do breaststroke.